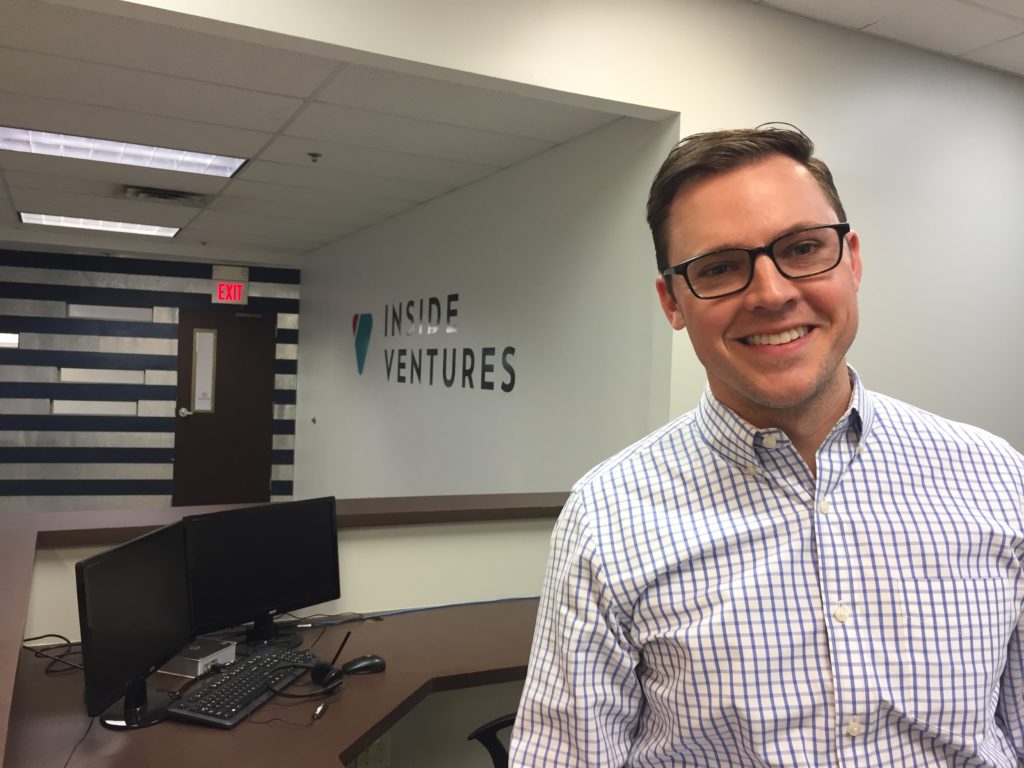 Trevor Nohe, president of Inside Ventures, stands in a training area of the company's new Downtown Lawrence facility.

About 100 new jobs are coming to downtown Lawrence, thanks to people buying stuff on the Internet. No, Amazon hasn’t set up a hub just for the Lawhorn household. Instead, an Overland Park-based company has chosen Lawrence as its first location for an expansion.

Inside Ventures has leased about 7,000 square feet on the ground floor of the former Riverfront Mall building at Sixth and New Hampshire streets. It has a handful of employees already working out of the space, which previously was occupied by Heartland Health. By March, the company hopes to have about 100 employees.

The company makes its living by helping people buy things online. Heaven knows some of us don’t need any help hitting the “buy now” button for many items. But there are some products where buying online can be a bit more complicated. Think insurance, or home security systems, or enrollment in an institution of higher education. Those are three major industries that Inside Ventures works with.

Often companies in those industries don’t have websites with buy now buttons, but rather online users click a button indicating that they would like to learn more or they have a question. The employees at Inside Ventures are the people who follow up on that request for more information.

“We bridge the gap from the digital marketplace to the physical world,” said Ryan Condron, a recruiter for Inside Ventures.

But make no mistake: At the heart of the business is sales. The majority of people who will work at the Lawrence facility will be sales representatives. But Trevor Nohe, president of Inside Ventures, said the company doesn’t want to be painted as a call center that is indiscriminately reaching out to anyone and everyone trying to sell a product. The company doesn’t conduct any cold calls, but rather only reaches out to people who have been online and sought more information.

“Our team is doing the front part of the sale,” Nohe said. “What are they shopping for? What interests them? We provide them information and then we make the warm handoff to the industry professional to complete the sale.”

As for the jobs, they are like many sales jobs. They come with a base salary plus a commission and benefits. Condron said many of the company’s full-time sales positions make about $45,000 a year, with some top earners at the $65,000 mark and above.

Inside Ventures is based in Overland Park and has about 150 employees. Nohe said he chose Lawrence as the spot for the company’s first expansion because he thinks being next to KU will be beneficial. Students learn the company’s high-tech phone systems quickly, The company also offers both full and part-time positions, so the company likes the idea of recruiting students for part-time jobs and them hiring them for full-time positions upon graduation. The decision also may have been guided by the fact Nohe is a KU graduate, with a degree in finance and marketing.

Trevor Nohe, president of Inside Ventures, stands in a training area of the company's new Downtown Lawrence facility.

Nohe said the company liked the Riverfront building because of its location in a vibrant downtown, and also because the former mall building could accommodate a quick expansion if one is called for. The company took the old Heartland Health space because it needed minimal work to house the company’s operations. But Nohe said he’s already entered discussion about taking the large unfinished space on the third floor of Riverfront, if the company’s business continues to grow rapidly.

The company has been around since 2011. Nohe — who previously worked in the venture capital industry and as a business consultant with Deloitte — said business has been strong in recent years as more companies have realized it pays to work with a company that specializes in working with online consumers.

“We have a laundry list of additional industries that we think are ripe for our type of marketing service,” Nohe said.

• The Lawrence chamber of commerce is throwing its support behind the school district’s $87 million bond issue. The Chamber announced its board of directors has unanimously voted to support the district’s bond issue, which currently is before voters as part of a mail-in ballot that is due on May 2.

The Chamber pointed to the success of the 2013 bond issue that focused on improvements to elementary schools. The proposed bond issue would focus on secondary schools.

Vote Yes signs also have popped up around town. A citizen group supporting the bond issue has formed. Thus far, no formal opposition group has been formed against the bond issue. The bond would increase property taxes by an estimated 2.4 mills, or about $55 on a $200,000 home or about $300 on a $500,000 business. 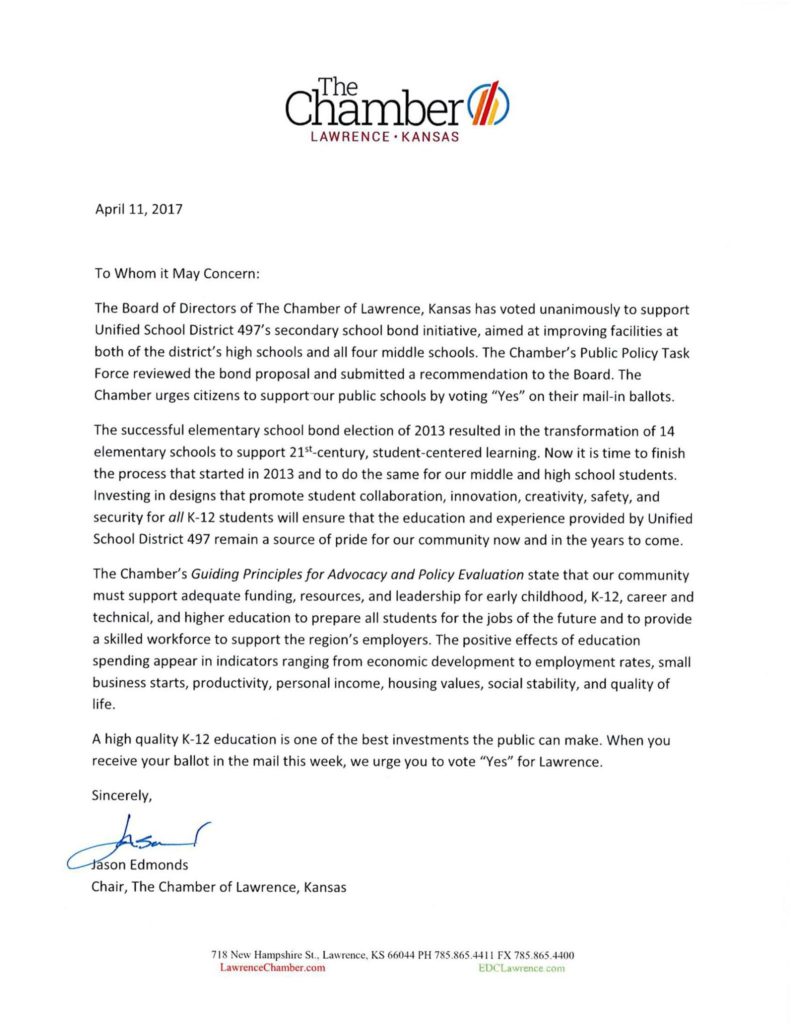