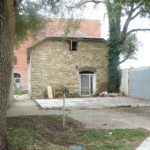 This former industrial duplex at 804 Pennsylvania St. in the Warehouse Arts District may soon become a bistro. But Lawrence city officials want significant restrictions on its operation.

“We saw a huge need to have an outpatient clinic in Lawrence,” said Mark Russell, director of business development for Cottonwood Springs. “We saw a lot of people from Lawrence and Topeka using our services in Olathe.”

The company is a full-service mental health care provider, including drug and alcohol addictions, depression, personality disorders and other disorders. The Olathe facility has 48 of its planned 72 inpatient beds open, Russell said. He said the Lawrence facility will be a location where community members can drop in and receive free mental health assessments. If inpatient care is needed, Lawrence patients can be admitted to the Olathe facility.

The Lawrence facility, though, is expected to play a major role in outpatient treatment. Russell said Cottonwood Springs operates intensive outpatient programs that require some patients to come to the facility five days per week, often for multiple hours of the day.

“A lot of patients from Lawrence or Topeka don’t want to drive here (Olathe) every day,” he said.

He said Cottownood Springs, which is owned by Louisville-based Springstone, plans to make major investments in the Kansas City area. Russell said the company has seen the public sector struggle to meet mental health care needs.

“That is one of the main reasons we came into the Johnson County area,” Russell said. “The surveys we saw showed this area was in the top 25 in the country in terms of underutilized mental health services and beds.”

Plans call for about $45,000 worth of new construction at the building, which previously housed some of the state’s SRS services before that agency consolidated space in Lawrence. Russell said he hopes the facility can be operational in September.

It will be interesting to watch how this facility plays into the idea of a crisis intervention center that county officials currently are planning. As we have reported, Douglas County has hired a firm to begin planning and design work for a crisis intervention center that would provide some inpatient beds for community members that are in a mental health crisis. The crisis center is part of a larger county effort to expand the existing Douglas County Jail and also address concerns that people with mental health conditions not be unduly housed at the jail.

I didn’t get into any discussions with Russell about what, if any, role his company might be able to play in addressing some of those needs. But it seems likely that the county will face challenges in securing all the funding needed to expand the jail and build a crisis intervention center. Whether a partnership with a private provider can play a role will be an issue to perhaps watch.

• I’ve talked a lot about new chicken places coming to town in the past several months. Well, add one more, but this one is different. It is not a restaurant but an office building.

As we reported in January, the developers of East Lawrence’s Warehouse Arts District filed plans for 10,000 square feet of offices at 832 Pennsylvania St. Well, that project is now completed and has a new name: The Orpington.

In case you aren’t up on your poultry breeds, developer Tony Krsnich explains that the Orpington is a beautiful breed of chicken. But why name a building after a chicken? History. The building at 832 Pennsylvania used to be a building that processed poultry long ago. For years it has informally been called The Poultry Building, and it also has been vacant for a good long time.

So, two things have now changed. The building has a new name, and it is no longer vacant. Krsnich said 15 of the 16 office spaces already have been leased. Companies including a salon, attorneys, engineers and tech companies have leased space in the building.

Krsnich said the project has come together very quickly and is further evidence that there is strong demand for office space that can accommodate businesses that are either small or in their startup stages. (Each office is about 200 square feet.) He said some of the tenants of the new building have moved from the Cider Gallery office incubator space that his company also owns and operates.

“This is exactly what we hoped to achieve when we did the Cider Gallery three years ago,” he said. “We are really trying to embrace entrepreneurship, and we think that is making a difference.”

The public can take a look at the completely renovated office building at a 4 p.m. open house on Friday.

• The Orpington project went quickly, but one that has not gone nearly as fast is a plan to add a bistro to the Warehouse Arts District. Krsnich has been working on that project for about three years, but he told me today he now has pulled a building permit for the project.

As we’ve previously reported, the business will be at 804 Pennsylvania St., adjacent to the multistory Poehler Lofts building. The bistro will be a bit unique in that it won’t have a kitchen. Instead, its food needs will be served by a food truck or a number of them. The bistro will have a bar too.

Krsnich said he couldn’t yet release all the details about who will be providing food service for the business. I’ll do some checking around on that, but previously several food trucks had publicly said they wanted to locate at the facility. Those have included Drasko’s Food Truck & Catering, KanBucha, Optimal Living, Torched Goodness, and Wilma’s Real Good Food. I’m not sure if they are all still in the project, but I’ll provide an update when I have one. (UPDATE: Add the folks who own The Burger Stand in downtown as foodies to keep an eye on with this project.)

Krsnich said he hopes to begin renovation work next week and would like to have the building open by late summer.

• A quick housekeeping note: Town Talk will be off Friday. If you have a tip for me, feel free to come out to the Douglas County Fairgrounds, where I will be parking cars for the antique auto swap meet that begins Friday and lasts through the weekend. I’ll be the guy in the cowboy hat riding the hood of a car. At least that’s what I fear.