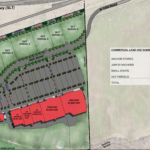 This August 2015 plan shows a concept for a retail center at the southeast corner of the South Lawrence Trafficway/Iowa Street interchange.

I certainly know a thing or two about backtracking. When you live in a house with a 12- and a 9-year-old you get to hear plenty of it. When you “complete” home improvement projects the way I do, you certainly get to practice it too. (I never said the staircase would go all the way to the bottom.) So, I’ll be interested if I hear any backtracking from the City Commission meeting as it relates to a proposed shopping center at the intersection of the SLT and Iowa Street.

We were scheduled to hear the commission discuss the shopping center issue at tonight’s meeting. They were asked to approve a legal document officially denying the proposed shopping center. But on Tuesday morning, City Hall sent notice that a vote on the matter would be delayed by at least one week.

I’m not sure what is causing the delay, but I certainly don’t expect commissioners to change their vote from last week and now allow the approximately 250,000-square-foot shopping center at the southeast corner of Iowa Street and the SLT. It sure appears that decision is done. That site won’t house anytime soon an Academy Sports, an Old Navy or any of the other retailers that were planning on coming to the center.

But it will be interesting to see if commissioners seek to massage the message they are sending by denying the project. As I wrote last week, I was not surprised commissioners voted to deny the shopping center proposal. I was surprised at one of the key reasons they used to deny the project: that the city is not ready for development south of the South Lawrence Trafficway.

I thought that was a surprising position to take given that the property in question has been part of the city limits since 1979, and that the City Commission just two years ago approved a plan for the area that stated the property was suitable for auto-related commercial development.

Last week’s denial of the plan has shifted the light to yellow. Commissioners said they didn’t want a shopping center at that site. People can argue about whether that is a good decision, but it is a decision consistent with the city’s plan. To be fair, the city never sent a signal that it wanted a shopping center at that corner. Developers were testing the waters, and it appears that test is now complete, at least with this City Commission.

But as part of last week’s denial, commissioners ended up sending another signal. At least three commissioners have said they think the Revised Southern Development Plan — the plan approved two years ago that says the property should develop as an auto-related commercial center — needs to be revisited. That’s sending a signal that the city is no longer sure any type of commercial development — or perhaps any type of development at all — should occur on the property just south of one of the larger intersections in all of Douglas County. Again, the light shifts to yellow, and the question is whether it will turn to a full red.

Simply put, commissioners must decide whether they want to send a signal that an auto-related commercial use would be appropriate for the intersection. That could be something like a new car dealership, or a complex of hotels to attract travelers off the highway, or a large fueling center, or some combination of all of the above. Again, you could argue why the city would rather have that type of development at the intersection than a major shopping center, but it doesn’t seem like that argument is going to go anywhere with this commission. That makes the more interesting argument one of whether the intersection should have any commercial development. A new car dealership at the site, for example, certainly could be a significant sales tax generator for the community.

Commissioners were scheduled to discuss the subject tonight, but now have delayed the discussion for a week. Commissioners will be asked to approve a legal document called a “findings of fact.” It basically is a document written by a city attorney that spells out why commissioners denied the project last week. As you may guess, it is usually not a good sign when you have to ask an attorney to write a document explaining why you did something. It is a mechanism used to put the city on a good legal footing in case the city gets sued over the denial. I don’t know how likely a lawsuit is in this matter, but the city doesn’t like to take chances with such issues.

You can read the entire document here. It lists several reasons for denial, but it is interesting to note that it does not state that the city isn’t prepared for development south of the SLT. Instead, the document basically says that a shopping center at that intersection doesn’t comply with the city’s comprehensive plan. The comprehensive plan calls for something like a car lot or hotels or some other auto-related use. This legal document that the city is being asked to approve still contemplates that a commercial use is foreseen for the intersection. Is that the message the City Commission intends to send, or does it still intend to send its yellow light message of “We’re not sure what ought to be built there”?

City commissioners last week could have denied the shopping center project by simply saying “we have a plan for that intersection and we’re not interested in changing it.” But commissioners didn’t say that. Instead they said something along the lines of “We have a plan for the intersection, we don’t want to change it to allow a shopping center there, and furthermore, we’re not sure we like the plan we have.”

The last part of the statement has produced some questions that it seems the commission will have to answer at some point:

• What type of development do they want at the intersection? Is an auto-related commercial center appropriate there? Is any type of commercial development appropriate there? These questions are the ones that seem to be frustrating significant numbers of the public. I have heard, by far, from more members of the public who are disappointed with the commission about this issue than people who are pleased with the commission. Their frustration seems to be that they thought the commission already had planned for this intersection and sent the signal that some form of commercial development was appropriate. Their second point of frustration is one of timing. The South Lawrence Trafficway has been in the works for more than 20 years. It has been easy to predict that this intersection would be a focal point of development pressure once the SLT was completed. The SLT is now near completion, the development pressure is hot, and the city is still trying to figure out what it wants for the intersection.

• What type of incentives is the city willing to offer big box retailers? With last week’s denial, this City Commission has decided it doesn’t want big box retail on that property. The site that is most well-positioned to accommodate multiple big box retailers is the property near Rock Chalk Park in northwest Lawrence. It is zoned and ready to go, but has not attracted any tenants for the last several years. Does the City Commission have a good understanding of why that development hasn’t attracted any tenants? Does the city believe some type of financial incentive will need to be offered to entice a retailer to go to that far northwest location? Does the city have a different plan for attracting retailers to the community?

• How important is it to add new retail options in Lawrence? I think this one produces a variety of viewpoints both on the commission and in the community. What is clearer is that City Hall budget makers are counting on significant amounts of retail growth to make the city’s budget work. I wrote last week about how Lawrence had one of the higher growth rates of sales tax collections in the state in 2015. Sales tax collections grew by 4.7 percent. That was good news, but the growth rate still fell short of what city officials were hoping for. City budget makers had projected a 5 percent sales tax growth. More importantly, the city has budgeted for a 5 percent growth in sales tax in 2016. That’s a more aggressive projection than what City Hall has normally used. In the past it has budgeted for growth rates closer to 3 percent. In short, City Hall is betting on more sales taxes.

Does the city need more retailers to produce those sales taxes? I don’t know, but it is a question that Lawrence taxpayers have a vested interest in seeing answered. One way or another, the city’s budget will need to balance.