Plans filed for major soccer complex near eastern end of SLT; Kansas ranks near top of list of states people are leaving 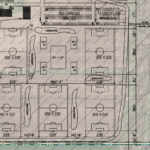 The first new development to go along the edge of the soon-to-be-completed South Lawrence Trafficway probably won’t be a new shopping center, but rather may be a big soccer complex. Plans have been filed for a multifield soccer facility near the eastern end of the SLT.

A nonprofit organization called Jambars Futbol Club Inc. has filed plans to build five full-length soccer fields, five separate training areas, a more than 200-space parking lot, and a 6,000 square-foot building for concessions and such on property near the “ski lake” that is just south of Kansas Highway 10.

The group has filed for a conditional use permit for 80 acres of property at North 1300 Road and East 1750 Road. If you are still confused about the location, it is near the spot where the South Lawrence Trafficway begins to look like my tie after a spaghetti dinner. Perhaps this Google map will help. It is the property just to the southwest of the ski pond.

Joe Comparato is the director of the soccer club. He’s also a soccer coach at Bishop Seabury Academy, one of the private schools in Lawrence. Comparato told me multiple people are involved in the proposed venture, and he envisions the soccer facility would be used by a variety of organizations. Comparato wants to use the facility for the training academies he runs, and he said Bishop Seabury is looking for a home to host its soccer teams. In addition, he said the Lawrence Adult Soccer League is looking for field space. He expects some youth soccer organizations to be interested in field space as well.

The plans filed with the Lawrence-Douglas County Planning Department show the site — which is owned by a trust controlled by the Pendleton family — at 80 acres, but Comparato said the immediate plans call for developing only about 40 of the acres.

Lawrence does have a soccer complex today. The Youth Sports Complex– or YSC — below the Clinton Lake Dam includes 23 soccer fields. The city of Lawrence operates the facility. But Comparato said it is difficult to get time on the city-owned fields. The popular Kaw Valley Soccer Association has an agreement with the city that allows that youth soccer league to take many of the available time slots for the facility.

Comparato said it is not unusual for soccer clubs in Johnson County to build their own facilities, and that model sparked the idea here. As for the proposed plans, the five fields would each be 360 feet long by 225 feet wide. The plans call for at least one of the fields to have lights, with lighting perhaps being added to other fields in the future.

The proposed site is one of the more visible properties in Lawrence. Thousands of vehicles travel by the site every day on Kansas Highway 10, and traffic volumes are expected to increase significantly as the SLT bypass project is completed later this year. The soccer complex, if approved, will be a bit of a gateway into the community.

The request comes shortly after commissioners rejected one development proposal at another soon-to-be-completed SLT intersection. Commissioners last week rejected a development plan for a new shopping center at the southeast corner of the SLT and Iowa Street interchange, in part, because they said they didn’t feel development was ready to cross the trafficway.

That perhaps could be an issue in this area too, but there is one large difference. The soccer group is not asking for any city approvals. The property currently is not in the Lawrence city limits, and the group is not seeking annexation.

“We don’t see any need to be annexed,” Comparato said.

Comparato said he thinks the soccer facility will fit in well with the county’s plans for the area. He notes that it is right next to the ski lake, so there is already a recreational feel to the area. He doesn’t expect the major intersection to come under heavy development pressure anytime soon.

“If they turned that one project down on south Iowa Street, I figure it will be a long time before they let anything build out here,” Comparato said.

• Maybe it is because we don’t have enough soccer fields — or perhaps there is some other reason — but Kansas didn’t fare well on a new study that measures the number of people moving in and out of the state.

The large moving company United Van Lines recently released its 39th annual edition of a study that tracks how many people it helps move into states and how many it helps move out of states. In 2015, Kansas had the sixth highest move-out rate of any state in the country.

To be clear, though, most of our neighboring states didn’t exactly tear it up in this category. Missouri had a 55.2 percent move-out rate, Oklahoma 51.7 percent and Nebraska 51.3 percent. (I take comfort in believing that the move-out rate would be higher in Missouri, but several folks didn’t want to take the time to take the car off the cement blocks. What? It is basketball season. I feel incomplete if I don’t make a Missouri joke.)

As for the states that were attracting the most move-ins, here are the top 5:

United does survey some of its customers about their moves. Traditional reasons such as job availability and being near family rank near the top of the list. The survey, though, noted some emerging trends, including the desire to be located in high-tech and areas that have creative-based economies, and a desire to have more outdoor activity and green space.

The United study isn’t definitive because it is just a look at one company’s activity, but it matches some concerns state leaders have been highlighting. A lack of strong population growth, especially in the younger age set has been highlighted as a concern by the governor and others.