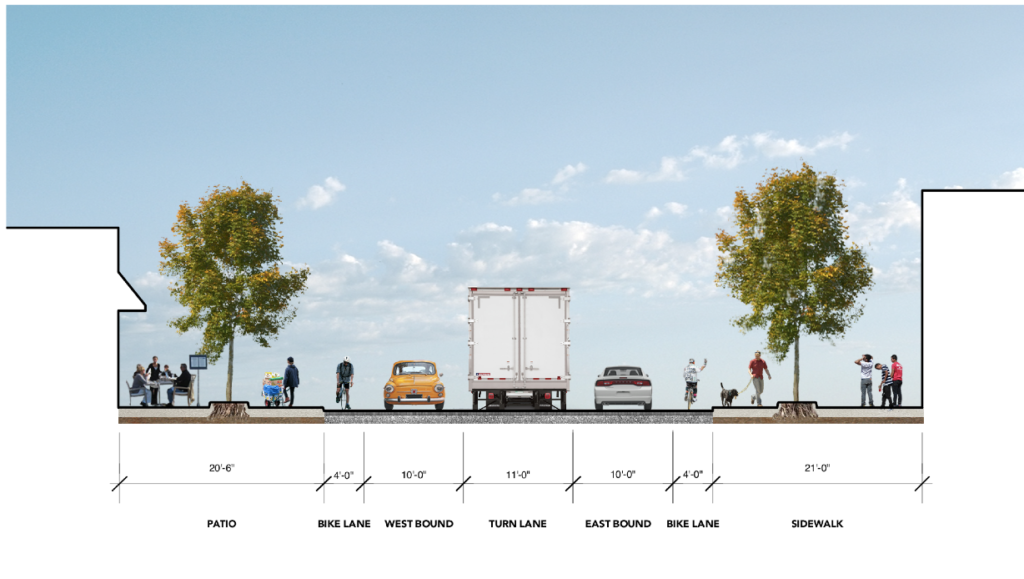 Get ready for a showdown, East Lawrence style. No, in this case, that doesn’t mean dueling muralists, drag races with Art Tougeau cars, or any of the other funky features that make East Lawrence such a hip place. Instead, we’re talking about an old-fashioned political showdown.

Word is circulating around the neighborhood and on social media sites that the Nov. 2 meeting of the East Lawrence Neighborhood Association is going to feature a hotly-contested election for seats on the association’s board of directors. The big issue in the race is expected to be how candidates feel about the proposed plans to convert a portion of East Ninth Street into an arts corridor with a redesigned street that will accommodate more gathering places, more pedestrian and bicycle pathways, and other such features.

A Facebook group called Community and Culture on East Ninth Street announced on its page earlier this week that 13 new people will be running for the board of directors, and all of them support the East Ninth Street project.

“Clearly, residents are ready for a change,” the post states.

Articles in the LJW continue to talk about opposition to the East Ninth project, but rarely mention the widespread…

Posted by Community and Culture on East Ninth on Tuesday, October 20, 2015

If you are confused, don’t feel bad. Somehow the East Ninth Street project has turned into a bit of a soap opera. It is odd because on its surface it looked like a project that would garner lots of support in East Lawrence because it involves art and a philosophy that reduces the importance of automobiles and increases the importance of pedestrian and bicycle activity. Those have all been items that traditionally have been high priorities for much of East Lawrence.

But there have been concerns expressed by some East Lawrence residents that the project creates too much potential for the area to become a linear entertainment district that links downtown and the East Lawrence Warehouse Arts District. There’s been concern about gentrification and property values too. Several of the people who have been most vocal in voicing those concerns are members of the East Lawrence Neighborhood Association’s board of directors.

At some point, I think Bill Clinton arrives on the scene and starts questioning what the definition of “is” is. I don’t know. I may be wrong about that. But I think I’m correct in saying that it will be lively meeting on Nov. 2. As for how it will turn out, I don’t know. It will all depend on who shows up to vote.

Regardless, East Lawrence will elect whomever it elects. I’m pointing it out to all of you because the East Lawrence Neighborhood Association is a frequent participant in City Hall issues. East Lawrence is definitely one of the more politically active neighborhood associations in the city. A new board may have a new philosophy.

Look at what happened with the Oread Neighborhood Association. A couple of years ago, there were wholesale changes on that board. Landlords and tenants felt they were being underrepresented, and since landlords and tenants are the largest groups of people in Oread, they had plenty of votes to elect their own slate of candidates.

But several members of the long-term board didn’t stop being political forces once they were voted off the board. Instead, they formed a new association with a membership limited to “owner-occupants” of the Oread neighborhood. Now, when a contentious Oread issue comes before the commission, we all get the benefit of having two associations speak about it — the Oread Neighborhood Association and the Oread Residents Association.

It is almost like the division that existed in the neighborhood prior to the vote didn’t simply go away by changing the names on a board of directors sheet.

We’ll see how it all works out in East Lawrence. One issue that is significantly impacted by the vote is the association’s ability to apply for Community Development Block Grant money awarded by the city. The city recognizes only one official neighborhood association for an area. That association is the one that can apply for annual allocation of CDBG funds. So, that will be an issue to keep an eye on.

We don’t normally cover East Lawrence Neighborhood Association meetings, but we may go to this one. It is set for 7 p.m. on Nov. 2 in the library of New York Elementary School. You have to be a member of the association to vote, and presumably you have to live within the neighborhood to be a voting member.

No word on whether they’ll require voter ID at the polls. Whoops, sorry about that. That’s a different debate.

• We had coverage earlier this week about the concept plan for the East Ninth Street project. Well, here’s some bonus coverage. I had a chance to go through the plan a bit, and thought it would be fun to share some images from the document. As they say, a picture is worth a thousand words. And in Lawrence, if you can figure out how to cut a thousand words out of a debate, you ought to do it. (I jest. Debate in Lawrence has kept me employed for a long time.)

Here’s one rendering that gives you an idea of just how much narrower the street would become, and how much more room would be devoted to bicycle and pedestrian uses. Sidewalks on each side of the street would be more than 20 feet wide — although not all of the area would be paved. Some would be greenspace. In total, there would be 31 feet of pavement devoted to vehicles — two 10 foot lanes and an 11-foot center turn lane. There would be about 49 feet devoted to bicycles and pedestrians. If approved, this street will be the most prominent example yet of Lawrence’s new philosophy on roads.

The city has started to implement that philosophy on the new 31st Street east of Haskell. It has narrower lanes, and wider sidewalks and multipurpose paths. The city also has been contemplating a design for Kasold that also seeks to implement some of the “road diet” ideas. It has met with some opposition. It will be interesting to see if this project is viewed differently. One difference is that with Kasold, the city is talking about an actual reduction in lanes. On Ninth Street, the number of lanes wouldn’t be reduced but rather the lanes would be narrowed. It may not reduce the capacity of the road much, but rather give the street a different feel and perhaps encourage slower speeds.

Here’s a rendering that shows how it may look in real life. Notice the area to the left with tables and chairs. That’s public property. Designers are referring to the area as a patio for the street.

Here’s one more. We ran it earlier in the week, but in case you missed it, this rendering shows how the area may look around the old Turnhalle building, which is just east of downtown. Notice the use of pavers on the road rather than traditional concrete or asphalt.

City hired consultants are expected to keep working on the design concept, with a goal of having a more definitive plan in February.