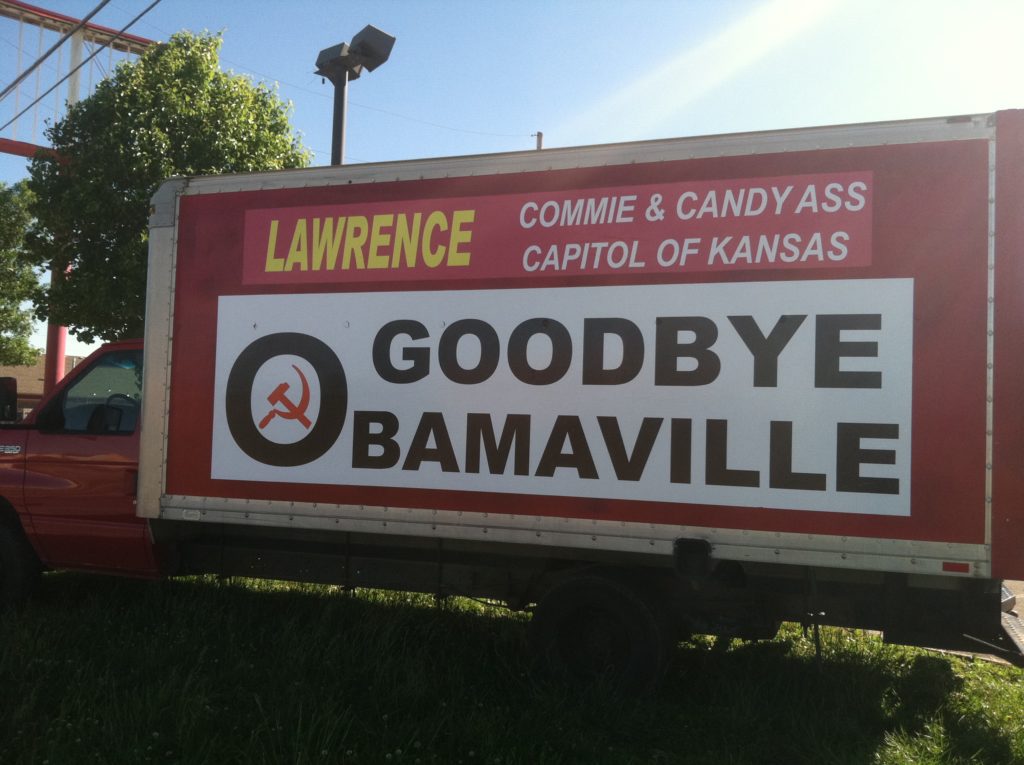 Well, the folks at Payless Furniture at 2800 Iowa St. long have been famous for their crazy signs and the dancing fellows who hold them. As the company closes its doors, it has one final set of signs for the community that it did business in for around two decades: “Lawrence: Commie and Candy Ass Capitol of Kansas. Goodbye Obamaville.”

That’s the big sign that thousands of motorists driving on South Iowa Street will see today. The sign is pasted to the side of the furniture store’s delivery truck and is prominently displayed in the business’ parking lot.

That’s the most visible side of the truck. But if you use your KGB sleuthing skills, you can see what else is written on the truck if you pull into the parking lot. One side of the truck says: “Restore Freedom. Even Retards Want to be Free.” Of course, that sign displays the American flag as well. (Actually, if you look closely, it is not the U.S. flag. It has too many stars.) 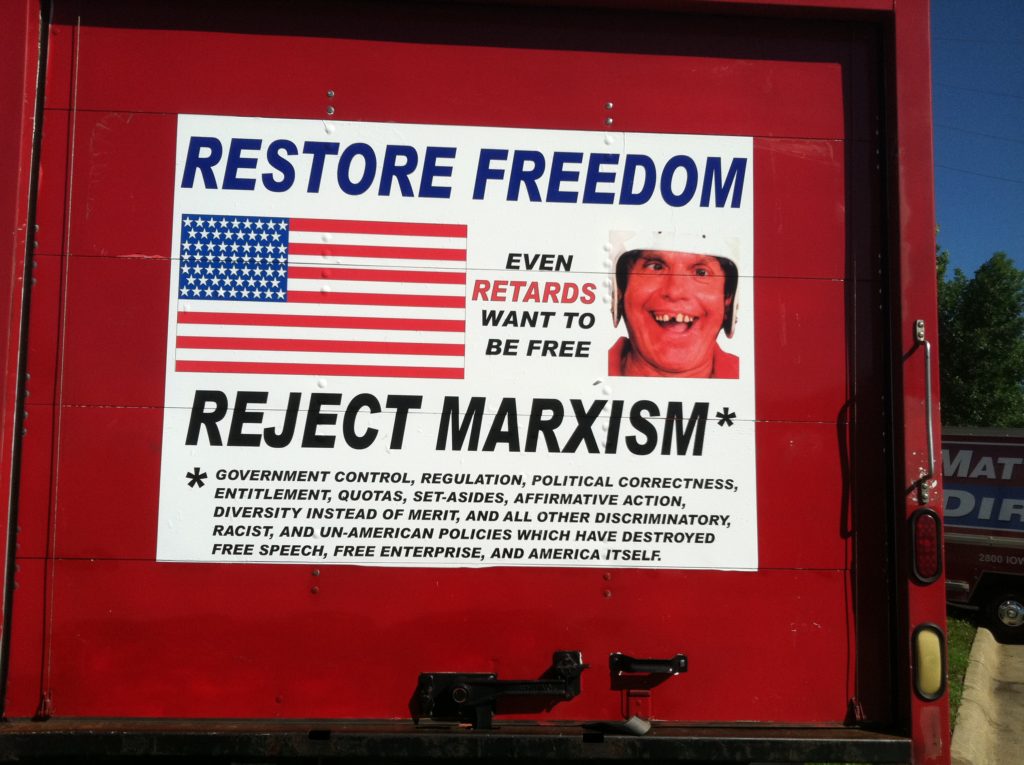 Then’s there the third side of the truck. You’re going to have to put down your hammer and sickle and restock your candy supply because that side takes awhile to read. Among the highlights: One panel titled “Lawrence City Lib Facts” touts Lawrence as the No. 1 “city in the U.S. to be a homeless bum,” and being a “magnet for urban rats from Chicago & East Coast.” Not to be a geographic snob, though, the panel also points out that Lawrence is a “refuge for welfare lowlifes from KCK and Topeka.”

There’s a second panel on that side that is titled “Lawrence Lib Profile.” It talks about “urban snobs who have never done any real work but expect redistribution from those who do real work.” It also has language about “unpatriotic, amoral, materialistic, self-centered judgmental, busy bodies” and “brainwashed Marxist zombies.” (Geez, we wish. Have you seen how much zombies are making on TV these days?) 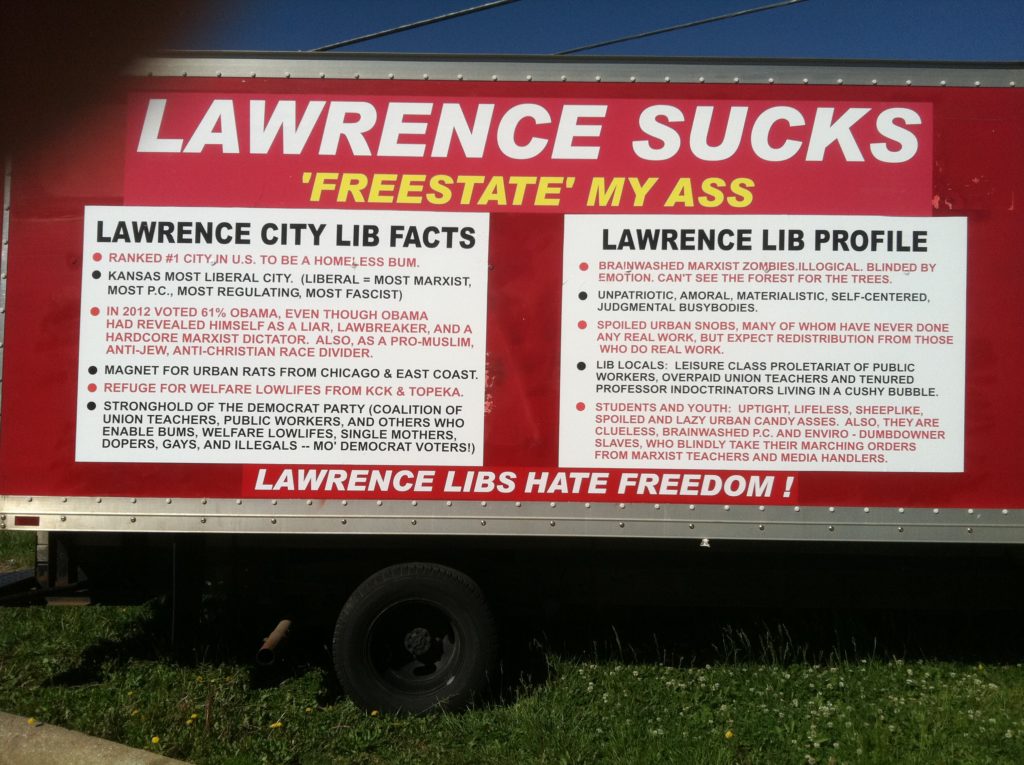 I went out to the site this morning to see all of it firsthand. While I was there taking notes, a man comes up behind me and tells me one thing on there is a misprint. One of the signs talks about how Lawrence voted 61 percent Obama in the 2012 elections. The man said that was actually the Douglas County number. Lawrence was higher than that.

A man from a nearby business who saw our conversation said that was Bob, the owner of the place. Indeed, the going out of business permit from the city lists a Robert Fyfe as the owner of the store. I’ve got his cell number, so I’ll try to call him shortly for additional comment.

As for how long the signs may be up on South Iowa Street, it looks like it may be a few more days. As we previously have reported, Dale Willey Automotive has purchased the building at 2800 Iowa St. and will convert it into a new used car sales center. But officials at the auto dealership told me the Payless folks have a lease on the property that runs through Friday. They said there obviously won’t be any such signs on the property once they take control of the site.

• When reached, Fyfe explained why he would send such a message to a community where he had done business since 1978: “I appreciate the business they gave me. It is not everybody, but it is a majority in Lawrence. It is not the young people’s fault. They are just so brainwashed.”

• Lawrence’s Ladybird Diner quickly baked up a “Candy Ass Donut” in response to the Payless signs.

— A steady stream of Lawrence residents stopped by the truck throughout the day, including several folks with signs of their own. 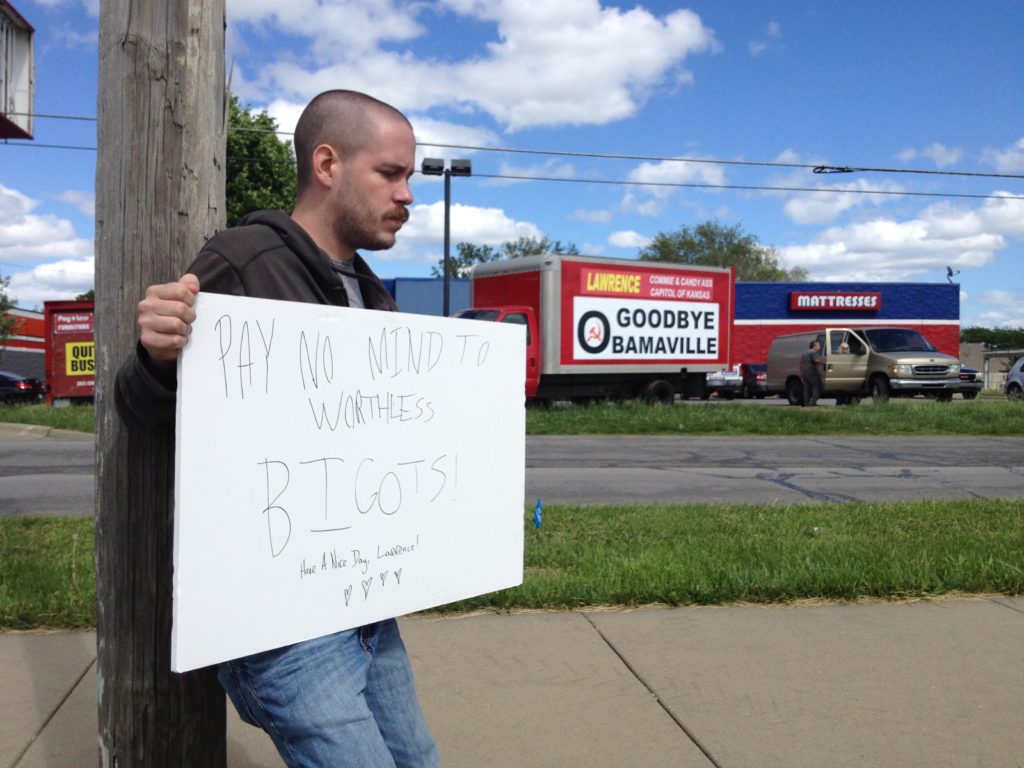 Adam Dorsson, of Lawrence, holds a sign in front of Payless Furniture's goodbye signage, Monday, May 11, 2015.