Home sales soar in March; proof that a Chick-fil-A is coming to Lawrence; plans for East Lawrence bar/bistro 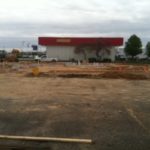 I’m sure we all spent some of our time last weekend watching the Kansas University spring football game, and we all came to the same conclusion about the upcoming season: I’m going to have to buy a bigger house to host all these fantastic watch parties. Well, some people evidently had already figured that out before Saturday’s game because the latest report for the Lawrence real estate market showed sales soared in March.

To be fair, I also did hear one other sentiment from KU’s spring football game: Until further notice, the spring game should be played only on . . . Nintendo. Regardless, home sales in March — which is the beginning of the important spring buying season — were up nearly 30 percent compared to March 2014, according to a report from the Lawrence Board of Realtors. There also were signs that April will be a solid month. The number of sales contracts written in March was up 31 percent. Sales contracts usually are a good way to predict sales totals for future months.

The strong March has 2015 off to a good start. Through the first quarter of the year, Lawrence home sales are up about 14 percent from the same period a year ago. About the only number that wasn’t stellar in the most recent report was the number of newly constructed homes that have sold: nine. That’s equal to the total for the first quarter of 2014, but is below the 2013 and 2012 totals.

Most of the report, though, was positive. In fact, the market is beginning to show signs of struggling to keep up with the pace of buyers. In March, there were 326 active listings on the market, down from 374 last year and down from 408 in 2013.
One way real estate agents measure the housing supply is to weigh the number of houses on the market versus the number of houses being bought per month. In March, that calculation was a 3.9 month supply. That’s down sharply from the 5.8 months and 5.4 months in 2014 and 2013. Anything less than a 5 month supply normally is a sign that a market is becoming tight in terms of available homes.

“Many homes are selling very quickly right now, and we really need more homes on the market,” said Crystal Swearingen, president of the Lawrence Board of Realtors.

Here’s a look at other figures from the recent report:

• The total value of homes sold in the Lawrence market stands at $34.7 million, up about 10 percent from the same period in 2014.

• The photo above should cause the arteries in your chest to tingle in a certain way. If the photo doesn’t, the restaurant that will soon be on the site certainly will. This photo is proof that a Chick-fil-A is indeed coming to Lawrence.

As we have reported several times, Chick-fil-A has plans to locate in the parking lot of the Dick’s Sporting Goods Shopping center at 27th and Iowa streets. Well, construction has now started on the pad site, which is just north of the Midas auto repair shop.

You can see in the photo, which is a couple of days old at this point, that work on the slab has begun, and piping is coming out of the ground. For those of you not familiar with all the technical details of construction, the piping is for the peanut oil, barbecue sauce and perhaps even the massive amounts of pickles needed to run a Chick-Fil-A. (Don’t feel bad if you didn’t know that. It is a very technical business, and I probably someday will start my own company building fast food restaurants.) As for how long it takes to build this restaurant and get it open, I have not been given an estimate by anyone associated with the project. But I’ve clearly established my credentials as an expert in the subject, so I would estimate three to six months of construction for the project. I’ll keep you posted.

• Another area that I’m an expert on is food trucks. If you don’t believe me, you could look in the creases of the seat of my F150 pickup and almost certainly find a french fry or two from yesterday’s lunch.

So, I bring you news about a food truck venture we’ve previously reported on. Tony Krsnich, the developer of the popular Warehouse Arts District in East Lawrence, has long had plans to turn the small building near Eighth and Pennsylvania streets into a bistro that serves food from several food trucks that will be just outside the building.

The project has received the necessary approvals from City Hall, but those approvals came with a condition: At least 55 percent of the business’ revenues had to come from food sales. The city placed that requirement on the zoning of the property after some neighbors were concerned the location could be come a tavern.

Krsnich, though, will be back at City Hall tonight to ask that the 55 percent condition be removed. Krsnich said he’s tried to find an operator for the business on multiple occasions, and each time the 55 percent requirement has been a deal killer.

Krsnich said the plans still call for food to be a large part of the business. He said he doesn’t have any desire to allow a traditional tavern or a rowdy establishment to locate in the building. The building is just west of his multimillion dollar Poehler Lofts building and his new 9 Del Lofts apartment building under construction at Ninth and Delaware streets. So, he notes, he has a lot of incentive to keep the neighborhood healthy. He said several potential operators have not wanted to take the risk of starting the business knowing that the city would have the legal right to shut it down if the business comes up a bit short on the food sales.

The 55 percent food requirement is the target new downtown drinking establishments have to meet. We’ll see what commissioners and neighbors think of the latest proposal. The Lawrence-Douglas County Planning Commission last month recommended removal of the 55 percent requirement on a 6-2 vote. City commissioners meet at 5:45 p.m. tonight at City Hall.