Downtown Lawrence retailer of 67 years to close its doors; city makes recommendation on team of artists and engineers to design Ninth Street project 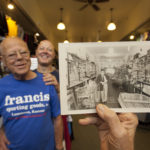 Dear Lawrence: In the old photo are Gib (Gilbert), right, and his son George, who opened Francis Sporting Goods in 1947 selling mostly fishing and hunting gear. Ten years later they moved its Calcutta poles and hunting jackets across the street to a larger retail space at 731 Massachusetts. Inventory expanded to boats (as seen in the '57 picture). Guns, baseballs, gloves, athletic shoes, letter jackets and tennis rackets followed. The new photo also shows George and his son, Jon Francis, in front of today's swim suits and shorts. Photo by Carol Francis and family

It has been well established that there is no crying in baseball. But there may be a few moist eyes in coming weeks inside a Lawrence institution that has sold many a bat, glove, ball and other athletic items to area residents. Francis Sporting Goods is closing its downtown store after 67 years in business.

The company is not going entirely out of business. Owner Jon Francis told me the company now will solely focus on its team business, which sells uniforms and equipment to everybody from youth baseball teams to college football programs.

“The retail store has been a big part of our lives, but for us to succeed, we have to choose a business that is best for us,” said Francis, who followed his father and grandfather into the business. “That is our team business. That is where we make our money.”

Francis said plans call for the store at 731 Massachusetts St. to close by the end of the year. The historic building that houses the store will continue to be owned by the Francis family, but Francis said the store will move out of the space and a new tenant will be sought. Francis said he is close to signing a deal on an undisclosed location that will provide showroom and warehouse space for the team business.

The move comes just a few months after Dick’s Sporting Goods opened its large store on south Iowa Street. Francis said the new competition did “solidify” the decision to close the store.

“It is sad,” Francis said. “Obviously there will be people upset, and I’m upset. But the town is growing and they elected to allow, or I guess they felt like they needed, a big-box option. That didn’t help us any. We have a loyal following, but we don’t have the size and selection.”

The business, which started out in 1947 selling boat motors and fishing tackle before expanding into other lines of sporting goods, plans to have a liquidation sale between now and the end of the year.

Francis said he’s sure he’ll see a lot of familiar faces come through the doors for the final sale.

“You get to know a lot of people,” Francis said. “I’ve watched a lot of kids grow up. You read about them in the paper with what they have done in this game or that game, and you know they have been in your store. That will be the tough thing to watch.”

The closure creates a bit of a hole in the middle of the 700 block of Massachusetts Street. As we previously reported, Lids, the store that specialized in team hats and other such merchandise, has closed. It was next door to Francis Sporting Goods in space that also is owned by the Francis family. Francis said a tenant has been found for that space. I hope to bring you details on that shortly.

The sporting goods market in Lawrence is changing. The sportswear retailer GameDay Super Store at 1008 W. 23rd St. also has announced it is closing its store. I’ve got a call into officials there to get more information about that decision.

• The project to remake the portion of Ninth Street that runs through East Lawrence into a unique arts corridor is moving ahead. As an article I wrote Wednesday details, some residents are concerned about the process, but city officials are hopeful once a consultant is hired to start planning the project, concerned neighbors will be more at ease. Well, the city is getting closer to hiring a consultant, or actually a team of experts, to work on the project.

The city is hosting a meeting from 5:30 p.m. to 7 p.m. Nov. 13 to allow the public to meet the city’s recommended design team. A city-appointed committee is recommending a team led by el dorado inc., a sizable design firm out of Kansas City. The architecture firm is notable in Lawrence because it is the designer of a new multistory apartment building under construction near Ninth and Delaware streets in East Lawrence. The project is the latest development by Tony Krsnich and his group, which have developed the Warehouse Arts District on the eastern end of this proposed Ninth Street corridor.

The company is bringing on several consultants to help with the project. They include lead artists Charles Blanc and Tristan Surtees of the Calgary, Canada-based art studio Sans Facon. The duo has been working on a major public art project in Calgary called Watershed+, that adds public art to some infrastructure projects in the city. You can see more here, but it looks like the duo takes a pretty broad view of art. One project was to turn several fire hydrants along a city street into water drinking fountains. Another project talked about on the website was the creation of a life-sized water truck carved in ice. It would be colored with environmentally friendly dyes, then placed in a neighborhood. Through the winter the ice sculpture would melt and refreeze and the the dyes would flow into the city’s storm water system and through a prominent creek in the area. No word yet on what the duo has in mind for Lawrence, but at first glance, it looks like they believe in more than just traditional sculptures and other works you may associate with public art.

The proposed project team also includes Luke Dubois, who is a well-regarded digital musician and artist who teaches at the NYU Polytechnic School of Engineering. Some of you may know Dubois from his stay as an artist in residence at the Lawrence Arts Center.

The other two firms interviewed by the city for the design project were teams led by DRAW Architecture and Confluence.

Lawrence city commissioners are expected to make a decision on hiring a design team for the project later this month.