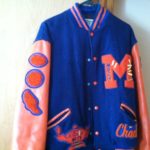 A Marais des Cygnes Valley Trojan letter jacket. Note that the medals have been removed to preserve the integrity of the plastic coat hanger.

If you see a bunch of grown men wearing high school letter jackets that accentuate just how much they have grown, perhaps you’ll now understand why: Adult flag football. It is the latest thing to come to the city’s new recreation center at Rock Chalk Park. But it certainly isn’t the only thing. Lots of people have been filing into the new center, according to recently tabulated numbers from the city.

From Oct. 5 through Nov. 9, the center — officially named Sports Pavilion Lawrence — has attracted 53,101 visits, according to numbers tallied by the city’s parks and recreation department. More specifically, the center has been attracting an average of 2,060 visits per day on the weekends, and about 1,300 visits on an average weekday.

But those numbers are likely larger now, said Ernie Shaw, the city’s director of parks and recreation. He said it has only been within the last week or so that the center has started hosting league play for volleyball, basketball and other sports. Those sports have increased the number of users at the facility significantly. Shaw was at the facility last Saturday and had staff members keep track of visitor totals on that day. By around noon, the center’s visitor total was at about 4,500.

“It has been crazy out there, but the staff and everybody are doing well with it,” said Tim Laurent, recreation operations manager.

Another number of note is that the city has issued 6,844 electronic key cards to residents. The key cards are used to access the fitness rooms, walking track and other such areas that can be cordoned off to keep out kids and other people who are at the center for a youth basketball tournament, for example.

Speaking of tournaments, none of these numbers include people coming to the center for big tournaments. Those will begin in the next few weeks, with the first big one that will occupy most of the center occurring in early January. Those tournaments have been touted as the economic development portion of the recreation center project. The hope is that the tournaments will become regional enough in nature that some folks will choose to spend the night in Lawrence and spend some money during their down times.

Most of the numbers being generated at the center currently are from local residents participating in parks and recreation classes and leagues. The department has added some new activities (calm down, don’t swallow your mouthpiece, I’ll tell you more about adult flag football in a moment,) and the department also has moved some classes from other recreation centers in town to Rock Chalk Park.

In this current session, the city has 161 programs at Sports Pavilion Lawrence, with about 2,300 participants signed up. But that number will grow. The city is taking registration for the winter and spring programs, and during that session there will be 329 programs at SPL.

There’s also going to be some nonsporting events at the center. The first one you may notice is the Holiday Extravaganza Arts and Crafts Fair on Dec. 6. Recently it has been held at the Douglas County Fairgrounds. But the event is moving to the Rock Chalk Park center, where vendors will set up on two of the eight courts that are the facility. The city has tarps that can be put down on the floors to protect them from damage. The move will allow the arts and crafts event to grow. At the fairgrounds, the city had to cap the number of vendors at 80. Now the city can accept significantly more vendors, and thus far the city has 97 vendors signed up for the event. It will be interesting to see how often the center is used for nonsporting events. The fairgrounds hosts several types of exhibitions, ranging from home shows to Comic-Con conventions. Rock Chalk Park would allow for larger events, and it has some of the most ample parking in the community. Plus, the city is creating a built-in marketing system for such events. Because people are required to get a key card to use certain areas of the facility, the city is building up a substantial database of e-mails (they ask for your e-mail address when you register.) The city is able to use that database to send out a e-mail blast about upcoming events at the center.

No word yet on whether they will send out e-mail blasts detailing the heroic exploits that occur on the flag football field. Registration is underway for the league, which will be played indoors at the recreation center, which features an indoor turf field. Costs are $370 per team. Each team will play with five players, but roster sizes are unlimited. (I’m assuming the number of oxygen tanks on the sidelines are unlimited as well.) Games will be held on Sunday afternoons, and play begins Jan. 11. Participants need to be 16 or older.

That ought to add to the excitement at the center. I hear that the facility already is a ball of noise on weekends. I can hardly imagine how much louder it will get when the crowds react to the parade of glorious letter jackets. Heaven help us if a highly decorated letter jacket from the mighty Marais des Cygnes Valley Trojans appears. (See below. I would have modeled it, but it is tight in an area that I will call the biceps, although anatomy was never my best subject.)

• The commercial momentum on south Iowa Street continues to build. Plans have been filed to redevelop the site at 24th and Iowa streets that previously housed a Phillips 66 service station. Plans call for about $125,000 worth of work to remodel the building into a more traditional office/retail building. Property owner Brandon Haverty told me he wasn’t quite ready to announce the tenant. But based on information filed with the city, it appears a Georgia-based firm called Anderson Financial Services is the tenant. A source called Mr. Google tells me the company primarily operates LoanMax Title Loan businesses across the country. Again, no official word on whether that is what is slated for the spot, but it might be worth keeping an eye on. Haverty said he expects the site to be ready for business in the first quarter of 2015.

If it indeed is a title loan place, that may be what they call synergy in the business world. Lots of retailers, lots of cars going by, which of course equals one thing: I really do need to fit into my letter jacket so I can stay warm on my walks to work.