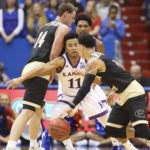 Kansas guard Devon Dotson (11) rolls around a pick from Emporia State forward Duncan Fort (14) as he defends Emporia State guard Malik Hluchoweckyj (2) during the second half of an exhibition, Thursday, Oct. 25, 2018 at Allen Fieldhouse.

All right, now that we’ve had a few days to digest KU’s first exhibition game of the 2018-19 season, it’s time to get back to the He Will, He Won’t, He Might predictions.

After all, the regular season is now just eight days away and we’ve got a few more to get to.

Because two of them started the other night, it seems only right to jump to the freshmen on this roster, who make up nearly 50 percent of KU coach Bill Self’s available bodies and also bring a ton of talent and versatility to the table.

Both are from Carolina, both have Devon in their first names and both are talented, tough competitors who look like they were born to play for Bill Self.

With that in mind, let’s dive right into three predictions for Dotson, a couple of which were made before last week’s game and look pretty good after our first glimpse.

He Will – Be as good as advertised

Living up to the recent standard set by Frank Mason III and Graham is not easy to do, but Dotson, largely because of his competitive nature, extreme confidence and blazing speed, will be able to handle it. That’s not to say he’ll put up the same kind of numbers as those two did. And he has a long way to go before he’s on the same level of them in terms of leadership. But that’ll come.

For now, Dotson’s presence is incredibly important because he gives Self a point guard who can take the ball and put pressure on the defense pretty much any time he touches. It’s early, but Dotson already seems to get exactly what his role will be.

There were a couple of times in KU’s exhibition win over Emporia State when Dotson easily could have settled for a jumper from behind the arc. Truth be told, had he pulled the trigger on a couple of them, they really would not have been considered bad or forced shots. Instead, he pump-faked and drove hard to the paint, looking to finish an easy bucket inside or dish to a teammate.

That tenacity, combined with his speed, is what we’ve heard a lot about since Dotson committed to KU. Now that you’ve seen it once, get used to seeing it over and over again, because this guy is as good as advertised and is only going to get better with each passing week.

As we’ve noted plenty here and elsewhere, Dotson is still a rookie and he has a long way to go before people start calling him Mr. Reliable or anything like that.

But even with the learning curve at hand, Dotson is a spectacular option for KU at the point, with great athleticism, size, skill and focus. Just don’t go expecting him to knock down a bunch of 3-pointers.

Two reasons here. No. 1 — and we saw glimpses of this in the exhibition opener — KU is going to look inside first, second, sometimes even third before letting anything fly in their half-court sets. No. 2, Dotson’s 3-point shot is not among his strengths.

Can he knock down an open jumper? You bet. You don’t get recruited by Kansas and put into this position without that in your repertoire — at least not at the guard position. But his release is still a bit slow and things have to be pretty optimum for Dotson to look to take many 3-pointers.

In fact, I would not be surprised at all if he took as many or more pull-up jumpers around the free throw line as he does 3-pointers this season, partly because he’s so quick and can get to that spot and also because I just can’t see him taking a ton of 3-pointers.

He’ll get his share. But I wouldn’t expect him to take more than one or two a game and there probably will be plenty of games where he doesn’t shoot a 3-pointer at all.

Let’s call it 9 -for-25 from downtown for the season for Dotson.

I, like many of you, have had Dotson pencilled into as KU’s starter at point guard for a long time and I don’t think that anything we saw last week is going to change that.

For one, Dotson started, was super steady and brought his defense to the floor. For two, Self all but said after the game that he liked the idea of sophomore Charlie Moore playing in an instant-offense off the bench type of role. Both of those things bode well for Dotson’s chances of starting all 35 or 40 games KU plays this season.

There’s just something about the way he pushes the pace and can get into the paint in ways that no one else on this roster really can.

He’s a weapon. And as long as he continues to use his head, execute what Self and company ask him to do, stays healthy and plays within himself, there’s no reason to think they’ll look anywhere else for a starting point guard this season.