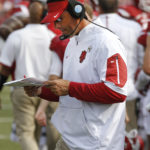 FILE - In this Sept. 5, 2015, file photo, Arkansas offensive coordinator Dan Enos walks the sideline during a timeout in the second half of an NCAA college football game against UTEP in Fayetteville, Ark. Enos left a head coaching job at Central Michigan to become the offensive coordinator at Arkansas. (AP Photo/Samantha Baker, File)

If the name Dan Enos didn’t immediately grab your attention while poring over potential candidates to become the next head football coach at the University of Kansas, it might be time to double back.

Currently the quarterbacks coach and associate head coach on Nick Saban’s staff at Alabama, Enos could have an in with KU, as highlighted in a Wednesday report from Football Scoop.

According to the website, which specializes in football coaching rumors, sources told Football Scoop that KU Athletic Director Jeff Long considers not only Les Miles, but also Enos as candidates to take over the long-struggling program.

From 2015-17, before he moved on to Alabama, Enos worked at Arkansas as the offensive coordinator and QBs coach on Bret Bielema’s staff. Bielema, as you will recall, was the last football coach hired by Long, the former Arkansas AD.

Enos possesses head coaching experience, too, one of the desired qualifications Long emphasized earlier this week.

Before moving to the SEC, Enos led Central Michigan’s football program for five seasons, from 2010-14. Enos went 3-9 in each of his first two years with the Chippewas, before going 20-18 in his final three.

Oddly enough, his final season with CMU included a 24-10 loss at Kansas. Enos left Central Michigan with a 26-36 head coaching record, three seasons of six or more wins and two bowl appearances, with a 1-1 postseason mark

Before being hired at Central Michigan, Enos spent four seasons at Michigan State as an assistant coach. There, he coached quarterbacks in 2006 and running backs from 2007-09. KU’s senior associate AD for football, Mike Vollmar, worked at Michigan State from 1996-2007.

— Who should be KU football’s next coach? Make your choice here: Fill out our KU Football Coaching Search Bracket.