A couple of years ago, I received a catalog from a major online bicycle retailer based in Colorado.On the cover was a drawing of a person on a bike, bundled up against the cold, riding through a snow-covered little burg at night. Snow is falling — big flakes, straight down (no wind!) — illuminated by the warm glow of a street light. I don’t think there’s a car in sight.I always thought it was the most inviting bicycle snow scene I’d ever seen, offering a bit of holiday magic, a serene little pedal through the pow, maybe a cup of warm cocoa — with perhaps just a touch of peppermint Schnapps — awaiting after the return home.I’d ridden in the snow many times before, and I’ve ridden in it many times since, and though I know it’s a manufactured idealism, I can’t help but think about that inviting, idyllic scene every time there’s a possibility for snow during one of my commutes.Generally speaking, there is nothing quite so Rockwellian about bike commuting in the snow.It melts, turns to ugly slush and splashes up, coating rider and bike. It falls from overhanging tree limbs, usually landing squarely on an exposed back of the neck. It frequently is accompanied by a howling wind. And the unprepared cyclist soon learns that narrow, little slick bike tires don’t handle too well in snow.It’s hard on bikes, and the salty/sandy aftermath is even worse.It can melt and refreeze under a layer of new snow, making bike travel treacherous. And even if the veteran cyclist is prepared with all the right equipment on his person and his ride, there’s always the possibility the four-wheeled users of the city’s infrastructure won’t be able to keep from slip-slidin’ around the rink.That said, I sometimes quite enjoy riding among the flakes (of snow, that is).Snow muffles sound and frequently keeps some drivers inside, making wintery rides the most peaceful of the year. Outfitted properly — with layers on me and fat, knobby (if not spiked) tires on the bike, along with fenders — I hardly notice the elements, and the crunching of snow under the tires of approaching cars gives me plenty of notice of impending doom.One of my fondest bike-commute memories came during a snow ride.A couple of inches had fallen, and I was bundled up appropriately, riding my fat-tired and fendered mountain bike. I decided to take a detour on my way to work to ride the little dirt trail that runs alongside the south side of the Kansas River. Accessible from Burcham Park, the trail skirts the woods and crosses a couple of bridges. Mine were the first bike tracks there after this particular snowfall, and the going was slow, but I didn’t mind.The trees hung heavy with snow; the Kaw was iced up. I stopped to snap a picture with my cell phone and noticed someone had been there ahead of me and had made two lovely snowpeople. Their bodies were nondescript, but their faces were intricately carved, gazing across the river.I paused for a moment with the lonely, frigid sentinels before heading into work. I now have a new favorite picture of the perfect winter commute, and it’s not on the cover of some catalog. 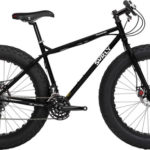