History says Huskers should be favorites to win Big 12 North

When I hear people talking about their pick to win the Big 12 North in football this season, the debate almost always becomes philosophical.

Obviously, Kansas and Nebraska look like the two front-runners. Both look to win games in completely different ways.

For KU, it will be about outscoring opponents. With Todd Reesing, Dezmon Briscoe, Jake Sharp and Kerry Meier returning, the Jayhawks are as loaded with returning players at the skill positions as anyone in the conference.

For NU, it will be all about shutting other teams down. Defense is coach Bo Pelini’s specialty, and defensive tackle Ndamukong Suh — a sufefire top-10 pick in next year’s draft — should lead a strong defensive unit.

I went back and looked up the Big 12 scoring offense and scoring defense* ranks for each North team that has advanced to the Big 12 championship game since the league was formed in 1996.

Here are the numbers:

In the 13 years of the Big 12, only twice has a North team advanced to the Big 12 championship with a higher-ranked offense than defense. The last time it happened was eight years ago (Colorado in 2001). Nebraska also accomplished the feat in 1997, but its defense was no slouch either, as the Huskers ranked first in offense and second in defense.

I’m sure the first response from many KU fans will be to bring up 2007. The Jayhawks tied for the Big 12 North title that year with Missouri, and KU’s success that season should prove that teams can win the Big 12 North with a great offense, right?

Well, that’s partially true. But what we can’t forget is that the Jayhawks had an excellent defense that year, too.

KU actually ranked first in both scoring offense and scoring defense that season. So while KU was successful with a good offense, the victories were made just as possible with a Jayhawks’ defensive unit that allowed just 16.4 points per game.

Conference history would seem to favor the Cornhuskers to win the North this season.

For the KU football team to advance to its first Big 12 championship game, it will either need a significant improvement from its defense or it will need to buck a Big 12 North history that would indicate that defense — and not offense — still wins championships. 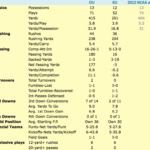