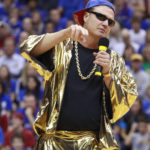 Vanilla Ice, played by Kansas head coach Bill Self, introduces a skit during Late Night in the Phog, Friday, Oct. 15, 2010.

The NCAA men’s basketball championship tournament is here, and as usual the Jayhawks are in it as a No. 1 seed. That’s worth an original rap to help get KU fans pumped up, a trio of local underground artists decided. Technically, the guys at Neostar Music decided to remake a track from a September 2016 album into a profanity-free version they hope fans will rally around. The song’s titled, “Bill Selfish.”

That’s more of a play on the name than a literal description for head coach Bill Self and his team, said Antwone McAfee (stage name, Ducoh), 34, a Lawrence native who currently lives in Olathe. McAfee created “Bill Selfish” along with Antonio Manley (aka Neostar) and Sheldon Flowers (aka Rio Bravo), both of Lawrence.

“We’re not calling him selfish,” McAfee said. But they kind of are. “We got some selfishness to us cause, you know, we good.”

McAfee said most of his music “has a good feel to it…more of an old school type of vibe.” Combine that with his love for basketball — specifically, KU basketball — and you get “Bill Selfish.” The song’s available for free on soundcloud.com (click here to listen), and McAfee said he’s been emailing it to people and was thinking about making CDs to hand out for free around town.

“The intent was for the community to be able to listen to you know and just have a good time and enjoy basketball,” he said. “I think a lot of people could relate to it.”

What happens to pianos KU doesn’t want anymore? Turns out, kind of like aged-out police cars or old ambulances I’ve encountered in my years of reporting, they’re sold at government auction.

Right now, three Steinway B pianos used in practice rooms at the school of music can be yours. The university is selling them to make way for new ones, and recently shared the listings in a press release.

Of course while I was at it I scrolled through all the other KU property for sale at govdeals.com. There appears to be lots of camera and film equipment up for grabs right now. Also a professional scale from Watkins, a handful of projectors, some trash cans and a TV with built-in VCR, if anybody is in the market for one of those.