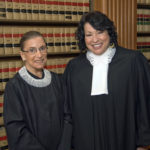 Justice Ruth Bader Ginsburg, left, and Justice Sonia Sotomayor pose for a photo in the Justices’ Conference Room in this file photo released Sept. 8, 2009, by the Supreme Court of the United States.

Online news headlines called it “epic,” “scathing,” “blistering,” “fiery” and an “Atomic Bomb of a Dissent Slamming Racial Profiling and Mass Imprisonment” (that last one was courtesy the Slatest blog on Slate.com). U.S. Supreme Court Justice Sonia Sotomayor authored a dissenting opinion in Monday’s 5-3 decision, in Utah v. Strieff, which held that evidence found by police officers after illegal stops may be used in court if the officers conducted their searches after learning that the defendants had outstanding arrest warrants.

The following is from a KU news release Tuesday:

Citing “Pulled Over,” … she observed
that “the indignity of the stop is not
limited to an officer telling you that
you look like a criminal.” The harm
caused by invasive police stops
extends to intrusive searches and
handcuffing, often in full view of the
public. She noted, “It is no secret
that people of color are
disproportionate victims of this type
of scrutiny.”

In their research for the book, the KU
scholars found that police
disproportionately stop black drivers
to check for possible criminal
activity, even when there is no
evidence of it. Officers use minor
traffic violations, like driving two
miles over the speed limit, as a
pretext for making these stops. The
practice has eroded African-Americans’
trust in the police and negatively
affected how minorities participate in
civic life, according to the study,
which was based on interviews with
2,329 drivers in the Kansas City
metropolitan area.

In her opinion, Sotomayor also
mentioned the book’s findings on how
police are trained to use discovery of
an outstanding warrant to give
officers cause for an immediate arrest
and an excuse to search a suspect.

Epp called Sotomayor’s dissent an “eloquent condemnation of investigatory police stops” and said he and fellow authors were honored she drew on their research.

“She is exactly right that invasive police stops cause deep harms to the many innocent people who are stopped in this way,” Epp said in KU’s news release “Our research reveals that these harms include avoiding driving in some areas and changing the clothes you wear for fear of how the police may treat you and being unwilling to call the police when you need help. These stops dangerously erode people’s trust in the police.”

*
• I’m the Journal-World’s KU and higher ed reporter. See all the newspaper’s KU coverage at KUToday.com. Reach me by email at sshepherd@ljworld.com, by phone at 832-7187, on Twitter @saramarieshep or via Facebook at Facebook.com/SaraShepherdNews.