Preliminary results are in from statewide student gun survey 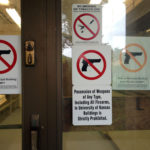 In November, students at state universities across Kansas were invited to take an online survey about concealed carry on campus. More than 20,500 students took the survey and — this may surprise many — they appear to be roughly split on some campuses over whether they’re OK with campus concealed carry.

That’s according to Kansas University Student Body President Jessie Pringle, who shared some preliminary results of the survey with the Kansas Board of Regents on Wednesday. Pringle is chairwoman of the Regents Students’ Advisory Committee.

The Students’ Advisory Committee will prepare a formal executive summary and present that along with complete results from the Docking Institute of Public Affairs at Fort Hays State University, which helped the group prepare the survey, after the first of the year, Pringle said. That report is expected to have more details about sample size and other data.

Here are a few more stats — for all universities — from the preliminary results:

• In general, students were more OK with faculty and staff being allowed to carry concealed on campus than they were with fellow students or visitors carrying guns.

A similar survey of university faculty and staff is still open.

As of Wednesday morning that survey had garnered 10,000 responses, an overall response rate of 47 percent, according to Lorie Cook-Benjamin, Fort Hays State University associate professor and chairwoman of the Regents Council of Faculty Senate Presidents. That survey went live Dec. 3, and faculty and staff will be able to take it until Jan. 4, Cook-Benjamin said.

• Reach me by email at sshepherd@ljworld.com, by phone at 832-7187, on Twitter @saramarieshep or via Facebook at Facebook.com/SaraShepherdNews.