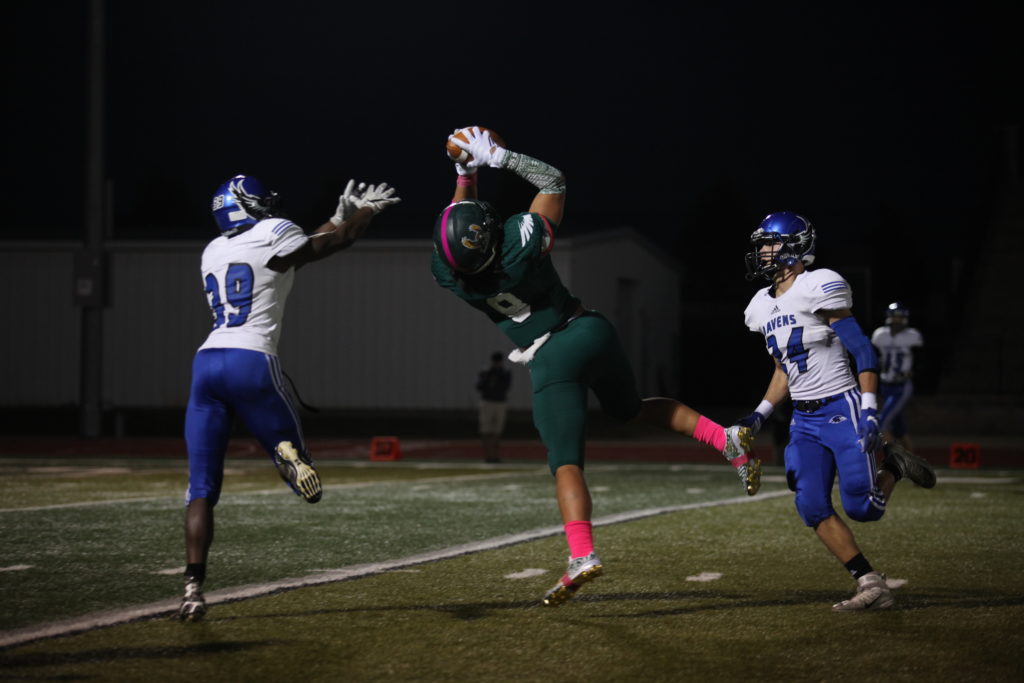 Through the first few weeks of the season, Free State football team’s main focus was fixing a few holes in its secondary after giving up some big plays.


The Firebirds saw the benefits of their hard work with a 35-0 victory against Olathe Northwest. It was the second shutout of the season and they’ve only allowed a combined 17 points in the past three games.


One thing that was noticeable was the Firebirds’ aggressiveness to jump routes. They played tight coverage on receivers but were ready to make a hit as soon as the ball arrived.


Lawrence High’s football team started fast in a 42-10 rout over Olathe South. The offense scored three touchdowns in the first quarter and the defense matched the intensity to give the Lions a 35-0 by halftime.


Averaging 8.9 yards per rushing attempt says a lot about Lawrence’s offensive line, which had zero returning starters to begin the season.


But with some new faces and players in new roles because of injuries throughout the year on the O-line, the Lions proved they are only getting stronger.


“Our offensive line was tremendous again,” LHS quarterback Dante’ Jackson said. “They do it day-in and day-out. They really don’t get enough credit for it.”


Now for a look ahead to next week:


Free State at Olathe East, at ODAC, on Friday at 7 p.m. — The Hawks (2-4) have lost two games by seven points and they’ve struggled to sustain much offense — scoring more than three touchdowns in only one game this year. O-East junior Will Scofield (unrelated to the main character in Prison Break) is the top running back with 290 yards and six touchdowns. On defense, junior Camron Mitchell-Johnson averages a team-best 9.5 tackles per game.


Shawnee Mission East at Lawrence High on Friday at 7 p.m. — Ranked No. 3 in the state, the Lancers (5-1) have the highest-scoring offense in Class 6A with a potent run game led by Nigil Houston, a transfer from SM West and second-team all-Sunflower League pick last year. Quarterback Luke Kaiser has thrown for several touchdowns this year, including a 54-yard pass to Sky Tate last week.

*
If you’re new to the blog, we’re copying one of the popular features of KUsports.com, “Keegan’s Ratings,” where Sports Editor Tom Keegan ranks KU football and men’s basketball players after every game he attends. These individual rankings are just one person’s opinion, but it’s a good way to look at how each person impacted each game.

1. Trey Moore, sr. RB — Moore made sure the Lions would not falter in the first half this time around. The senior back scored all three of his touchdowns in the first quarter en route to a 180 yard night on 20 carries.


2. Dante Jackson, jr. QB/CB — Jackson was electric in the route, running the ball 13 times for 160 yards and two scores. He effectively ran the option all night, knowing when exactly to keep it and pitch it to Moore.


3. Jake Unruh, sr. DE — Multiple times Olathe South chose to run to the short side of the field in order to avoid Unruh’s side on the defensive line. Unruh was constantly in the backfield in the lopsided affair and maintained the Eagles’ offensive attack.


4. Azariah LeBrun, sr. LB — Olathe South faced mostly reserves in the second half and ended up accumulating 307 yards on 44 carries. LeBrun anchored a linebacker unit that helped keep the Eagles out of the end zone for much of the game.


5. BJ Murry, sr. DT — After surrendering a nine-play drive on the defense’s first stance, the Lions stiffened and locked down the Eagles attack. Murry and the rest of the defensive line met them at the scrimmage forcing three consecutive three-and-outs following that first drive.


6. Jacob Mills, jr. C — Even without starting right guard Jesse Tunget, Lawrence High amassed 418 yards on the ground on 47 attempts. That was due to major continuations such as Mills from the offensive line, who stepped up in Tunget’s absence.


7. Jaxon Malone, soph. CB — The Eagles were unable to get anything going through the air thanks to the play of Malone. LHS limited its opponent to just 38 passing yards on the night after the team threw for 127 the week before against Free State.


8. Clarence King, soph. WR — King was once again Jackson’s favorite target as King led the team in catches with three for 28 yards. In addition, King’s down the field blocking proved to be crucial on the team’s long runs.


9. Kristian Russell, jr. LT — Russell manned Jackson’s blind side all night as the quarterback complete 6-of-8 passes for 52 yards and a score. Lawrence High also ran a number of it’s running plays to the left side of the line.


10. Cole Brungardt, sr. K — Brungardt knocked in all six of extra point attempts after booting all four of his attempts in last week.

1. Gabe del Valle, jr. CB — Del Valle played as good of a game as you can ask from a defensive back. He grabbed an interception and broke up three passes. One of his best tackles was in the second quarter when the Ravens attempted a screen pass to Del Valle’s side and he had a receiver in front of him to block. Del Valle shed the block and made the tackle in space for no gain, forcing a punt two plays later. The Firebirds scored on the next possession.


2. Zion Bowlin, sr. RB/DB — In the secondary, Bowlin was a big part of Free State’s blanket coverage, forcing 18 incompletions and giving up only 51 yards. On offense, Bowlin ran for 132 yards and a touchdown on 18 attempts, including a 65-yard rush to the two-yard line.


3. Zack Sanders, sr. WR/CB — With two touchdowns in the second half, Sanders has scored a ridiculous nine touchdowns in the past three weeks. He caught seven passes for 52 yards, but was swarmed by defenders on underneath routes. Defensively, he broke up one long pass with a huge hit with his shoulder to knock the ball out of a receiver’s hands.


4. Noah Kema, sr. DT/TE — Along with strong coverage in the secondary, Kema provided strong pass rush and was constantly in the backfield. He recorded at least a pair of tackles around the line of scrimmage and forced an intentional grounding penalty on one pass rush. At tight end, Kema made three catches for 40 yards.


5. Chase Houk, sr. LT — After hearing from coaches at halftime about picking up the intensity, Free State’s offensive line dominated the line of scrimmage in the second half, especially the left side with Houk. The Firebirds ran for 236 yards (5.9 yards per carry) and provided a strong pocket for QB Dallas Critteden.


6. Jay Dineen, sr. LB/LG — One of the best run defenses in the Sunflower League starts with Dineen finding his way into the backfield to make tackles. He batted down at least one pass at the line of scrimmage to help out his secondary, too. All that was along with some key blocks on the offensive line.


7. Daniel Bryant, sr. WR/CB — Bryant caught a 34-yard pass in the second quarter to the six-yard line, breaking a tackle on a slant route. Two plays later, it turned into the Firebirds’ first touchdown. At cornerback, he provided nice coverage and dropped an interception after jumping a route in the third quarter.


8. Jax Dineen, so. RB/LB — A punishing runner for defenders, Dineen ran for 61 yards and a touchdown on seven carries. That included a 49-yard run in the fourth quarter with a nice cut up the middle of the field. Dineen added several tackles at linebacker and a half-sack.


9. Dallas Crittenden, sr. QB — Crittenden found his rhythm in the second half, taking the throws that Olathe Northwest’s defense allowed and not forcing any passes. He completed 16 of his 24 passes for 189 yards, two touchdowns and one interception. On his touchdown throw in the fourth quarter, he did a great job of scrambling before finding Sanders in the back of the end zone.


10. Nick Eddis, sr. DT — Played well on the defensive line, helping stuff Olathe Northwest’s run game. At the beginning of the fourth quarter, Eddis made a tackle on an option pitch. Then on the next play, fourth down, he combined on a sack with Jax Dineen for a turnover on downs. 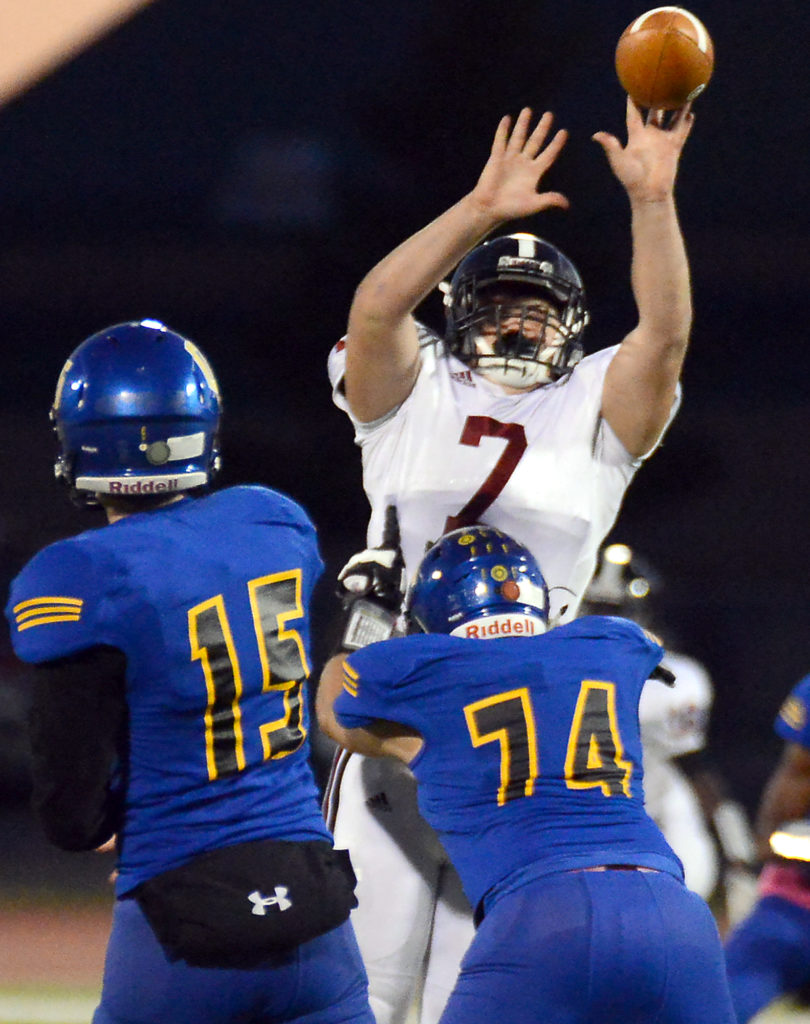 Jake Unruh (7) got his fingers on the ball to deflect a pass in the first half as Lawrence High played Olathe South Friday at ODAC.

*
With only two weeks left in the regular season, here is a look at the current playoff standings.


Note: For the first time since the 1980, KSHSAA isn’t using a district playoff system. Instead it’s an eight-game regular season before all of the teams are seeded 1 through 16 for the ninth game — the first round of the playoffs. 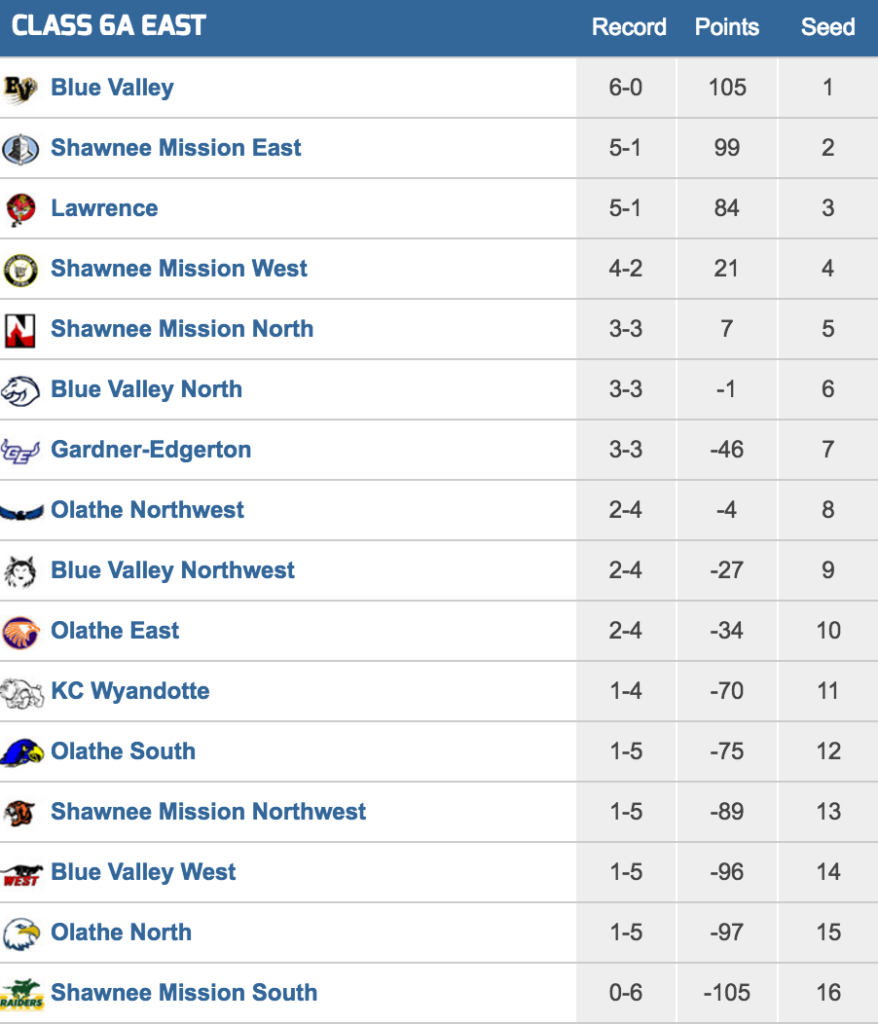 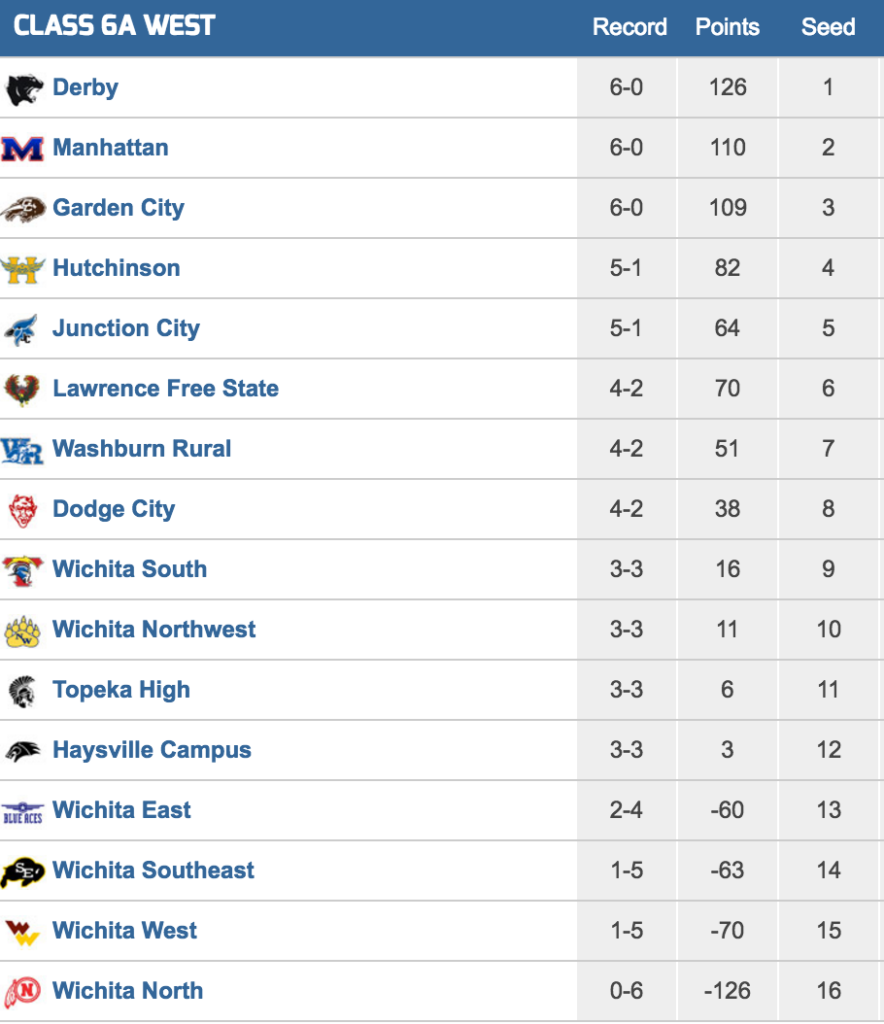 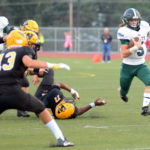 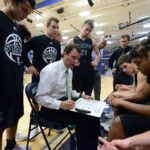 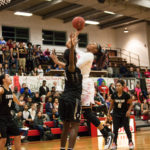 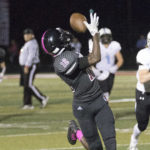 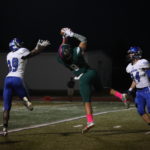 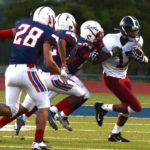