After three weeks, most impressive Big 12 team is … Nebraska? 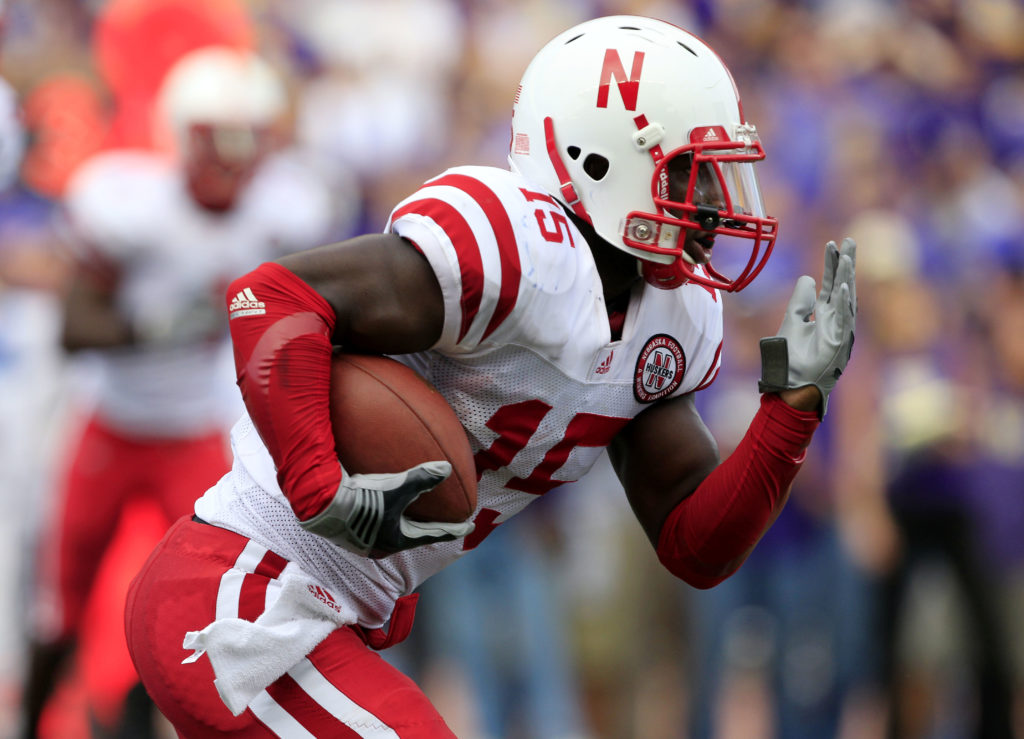 Nebraska's Alfonzo Dennard returns an interception against Washington 31 yards for a touchdown in the second half of an NCAA college football game against Washington Saturday, Sept. 18, 2010, in Seattle. Nebraska won 56-21. (AP Photo/Elaine Thompson)

These past few years, when thinking about the best football team in the Big 12, the mind immediately puts Texas in one corner, Oklahoma in the other corner and compares the two.

For the past six years, either the Longhorns or Sooners have hoisted the Big 12 Championship trophy.
With three weeks complete in 2010, however, inconsistent play has refrained me from instantly crowning Texas and Oklahoma as being dominant forces like they’ve been in the past.

That thought leads me to the question of the week: Which Big 12 team has been the most impressive after three weeks in 2010?

Bo Pelini and Nebraska, come on down.

Feels odd picking any team from the North as most impressive, but the Cornhuskers have displayed the most Big 12 style points so far.

No longer can it be said the Huskers haven’t played anyone. On Saturday, NU went on the road and destroyed Washington, 56-21.

Washington quarterback Jake Locker has a lot going for him. He has experience as a senior. He’s a Heisman hopeful (well, maybe not anymore). He’s a potential future No. 1 overall pick in next April’s NFL Draft.

Against Nebraska, Locker attempted 20 passes. He completed four. On his home field. Locker was picked off twice, one of which Alfonzo Dennard took back for a touchdown.

Nebraska's Alfonzo Dennard returns an interception against Washington 31 yards for a touchdown in the second half of an NCAA college football game against Washington Saturday, Sept. 18, 2010, in Seattle. Nebraska won 56-21. (AP Photo/Elaine Thompson)

Nebraska’s defense, first in the country last year in scoring defense, appears on the right path to being similarly dominant this season. The Huskers have allowed only 16 points per game, 24th in the country. Their eight interceptions rank second nationally. It’s no secret the Blackshirts are darn good.

NU’s offense appears more multi-dimensional this year with red-shirt freshman quarterback Taylor Martinez than it did in 2009, when Zac Lee led a rather punchless and anemic attack.

Martinez must be a quick learner. The freshman outplayed the senior Locker on Saturday, combining for 287 yards (150 passing, 137 rushing) and four total scores. 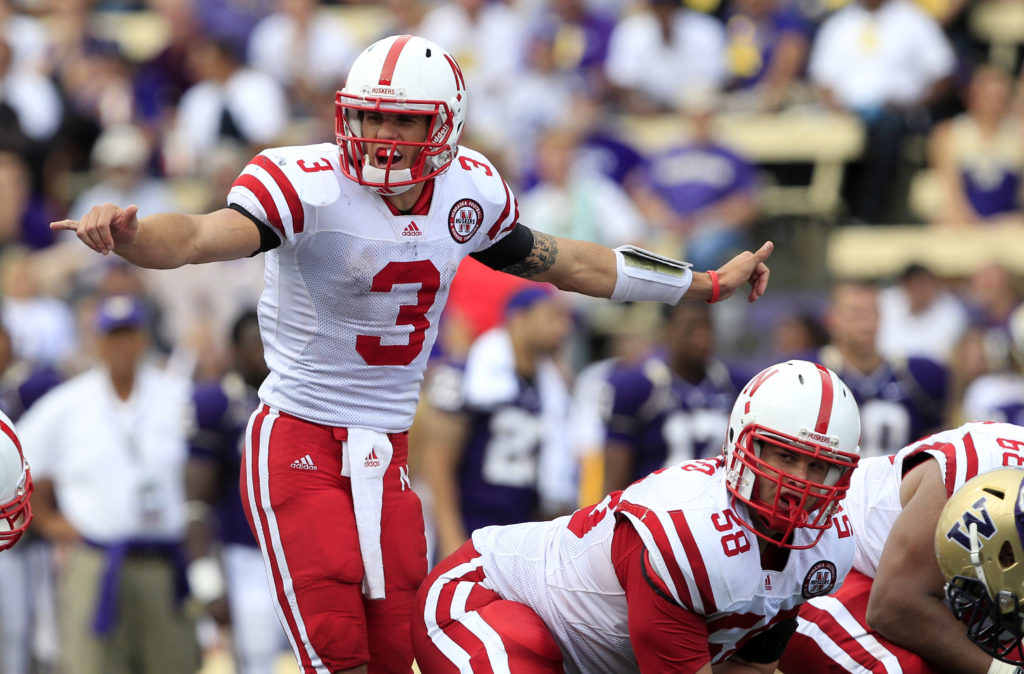 Nebraska quarterback Taylor Martinez directs his team from the line of scrimmage during the second half of an NCAA college football game against Washington, Saturday, Sept. 18, 2010, in Seattle. Nebraska won 56-21. (AP Photo/Elaine Thompson)

If Nebraska remains healthy and continues to see vast improvements from its offense — NU has won its first three games by an average of 31.66 points — it may put an end to six years of South dominance in the Big 12 Championship.

Texas and Oklahoma haven’t looked as mighty this season. The Longhorns let Rice hang around in their opener and appear to be less talented offensively than in years past, while the Sooners let one possession separate themselves from Utah State and Air Force at home.

Of course, it’s just three games. Things could change. Before the season, I picked Oklahoma to win the Big 12 because I thought it had the most talent. Could still be the case.

If Nebraska gets complacent, it won’t hold the best AP ranking in the Big 12 at No. 6 (in new poll that came out Sunday), ahead of No. 7 Texas and No. 8 Oklahoma.

But after three weeks, Nebraska has impressed me more than any other team in the conference.

Time for week 3 reaction from the picks I made on each Big 12 game. My upset pick (Hawaii over Colorado) didn’t work out too well, but I managed a 9-1 week to move my season record to 31-3. I’ll take it.

For my thoughts on the weekend’s games and reaction on my predictions, check out the latest episode of Conference ChatterTV:

Moving on to week 3 awards for those who went above and beyond in the Big 12.

The junior torched Tulsa for 409 yards and six touchdowns in Oklahoma State’s 65-28 romp on Saturday in Stillwater, Okla. The Cowboys currently rank second in the country with an absurd 57 points scored a game, second only to Oregon (63).

Kansas call of the week: It’d be interesting to see Daymond Patterson turned loose on some deep passes.

By now, everyone knows Patterson has serious speed. It seems he’s only been able to showcase that speed, though, on short screen passes. Since he’s a burner, why not occasionally keep defenses honest and throw deep more? Especially since Jordan Webb, a more decorated passer than Kale Pick, is at the helm. 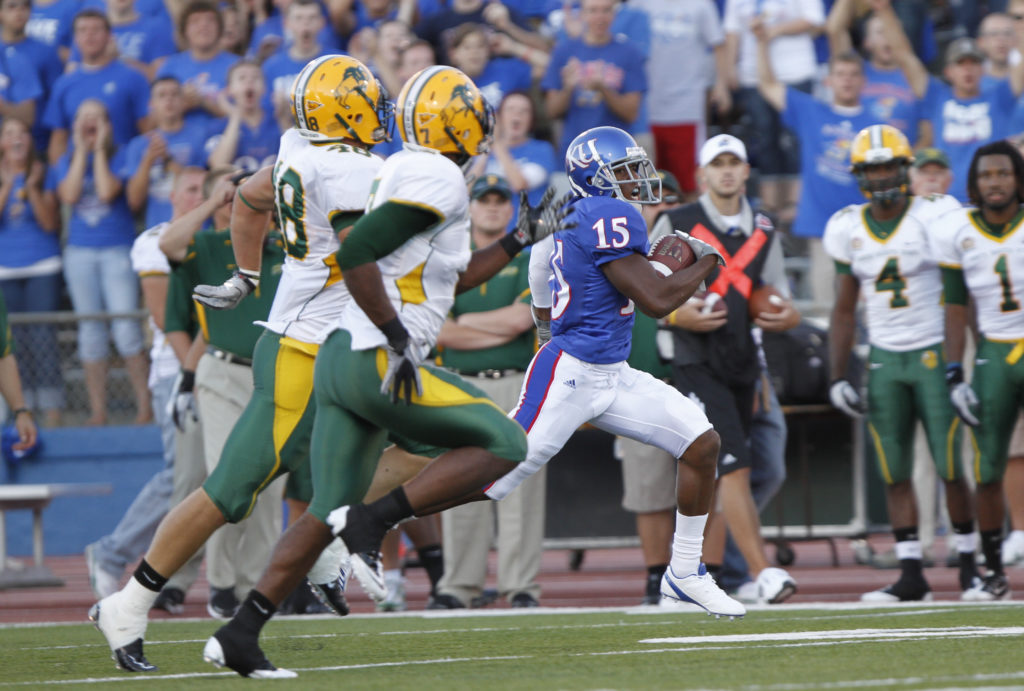 Take Patterson’s longest reception of the year, for instance. It was 32 yards against Georgia Tech on a screen pass. Patterson had to earn every one of those yards himself. Well, OK, there were blockers, etc., but you get the point.

I realize the idea is to get Patterson in open space, where he can make defenders miss and gain extra yardage on his own.

But if he’s so fast, wouldn’t it be interesting to have him fly down the field for an occasional deep ball, especially since opponents will scout KU and see Patterson utilized regularly on screen passes?

Against Southern Miss, Patterson had only five catches for 15 yards. The Jayhawks need to extend the field more.

Big 12 Tweet of the week: This is a new, weekly note here at Conference Chatter, where we’ll pick out something semi-interesting/funny from a Big 12 player’s Twitter feed.

This week’s Tweet of the week comes from Texas A&M quarterback Jerrod Johnson:

“@JerrodJohnson1: I just learned that it is illegal to go hunt whales on sundays in ohio?? Haha gotta love grad school.”

Couldn’t say I ever knew that. But Johnson is a really interesting guy. I had the chance to listen to him meet with reporters at this past summer’s Big 12 media days. Definitely deserves a follow on Twitter if you’re on there.

Looking ahead: Game of the week: No. 7 Oklahoma at Cincinnati.

The following is the latest edition of the Sorrentino Scale. The number that follows in parentheses is what the team was ranked last week:

1 (3). Nebraska (3-0): The scale could change at the top three spots from week to week, and all three top teams have reasons to be No. 1. Nebraska’s claim would be its dominant margin of victory, its balance on both sides of the ball and its impressive road stomping of Washington.
2 (1). Texas (3-0): UT’s claim would be that it’s already 1-0 in conference play after a 24-14 road victory at Texas Tech. That’s more than OU or Nebraska can say.
3 (2). Oklahoma (3-0): OU’s claim would be that it stomped then-No. 17 Florida State by 30 points. But that was at home, and OU hasn’t had to go on the road this season. The two other victories, both also at home, were one-possession games against teams OU should have probably beaten by more.
4 (7). Oklahoma State (3-0): Cowboys have looked electric on offense. I’m curious how this will translate against more difficult competition in Big 12 games, though.
5 (4). Texas A&M (3-0): Aggies may be 3-0, but I’m seriously concerned about them right now. Nine turnovers in last two games won’t get it done in Big 12 play.
6 (6). Missouri (3-0): Tigers also have a lot to clean up after barely escaping San Diego State.
7 (8). Kansas State (3-0): Daniel Thomas looks even more unstoppable than he did in 2009.
8 (5). Texas Tech (2-1): Tech’s offense didn’t play badly against UT, despite putting up only 14 points. UT’s defense is just really, really good.
9 (9). Baylor (2-1): Looked outmatched against TCU.
10 (12). Colorado (2-1): Buffs escape basement in defending home field vs. Hawaii.
11 (11): Iowa State (1-2): Played K-State tough, but fell to Wildcats for second straight year at Arrowhead Stadium.
12 (10): Kansas (1-2): Jayhawks back in basement after looking flat against Southern Miss.

That should be all for now, friends. As always, discuss. 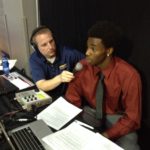 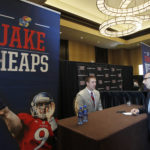 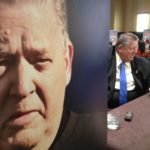 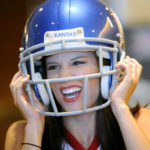 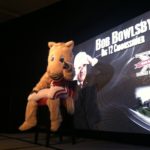 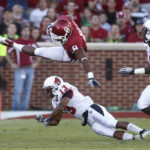 Week 6 Big 12 picks: A farewell and thank you from Conference Chatter