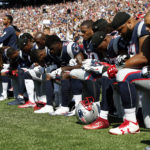 Kansas Secretary of State Kris Kobach, no stranger to the culture wars in America, dived headlong into another one Monday, calling NFL players who protest during the national anthem “unpatriotic” and “ignorant.”

In an opinion piece written for the conservative website Breitbart, the Republican firebrand who is now running for governor said the practice of some players kneeling instead of standing with their hand over their hearts during the anthem “has gone from being a stunt to a plague that is infecting the whole league.”

“They should be celebrating the American Constitution and the American system, not disrespecting it,” Kobach wrote. “If they want to protest incidents of police shootings, they should wear symbolic armbands naming the victims or put stickers on their warmup gear on the sidelines. That would be more specific and it wouldn’t disrespect our country.”

Kobach is a frequent paid contributor to Breitbart. On Tuesday, Kobach’s campaign committee sent out an email soliciting donations, quoting from the Breitbart column and saying he understands “the importance of respecting those who have fought and died for the freedoms you and I enjoy.”

Kobach’s column came on the heels of a speech Friday and a series of tweets over the weekend by President Donald Trump, who said NFL owners should fire any player who refuses to stand during the anthem. Kobach was an outspoken supporter of Trump during the 2016 election and now is vice chair of his Presidential Commission on Election Integrity.

The protest movement began last year when then-San Francisco 49ers quarterback Colin Kaepernick began kneeling during the national anthem as a sign of protest against racial inequality in America and especially police violence against African Americans.

Kaepernick became a free agent after the 2016 season but was not signed by any team this year.

Trump’s comments sparked a firestorm of controversy within the NFL, whose commissioner, Roger Goodell, said, “Divisive comments like these show an unfortunate lack of respect for the NFL, our great game and all of our players, and a failure to understand the overwhelming force for good our clubs and players represent in our communities.”

On Sunday, players and teams throughout the league engaged in various acts of solidarity. A number of Kansas City Chiefs players took a knee during the anthem before their game against the Los Angeles Chargers.

Chiefs quarterback Alex Smith said after the game that he had been upset by Trump’s comments.

“I don’t feel comfortable talking about this stuff. We are athletes playing football,” he said, according to post-game quotes released by the team. “I would be lying if I said the comment didn’t upset me. I have been in this league a long time. The league is not perfect, but I am proud of my teammates, coaches, trainers and owners. There are so many great things that go on in this league and this community. There is so much good intention and guys trying to do good things. It definitely struck a chord a little bit especially to see guys get attacked for a peaceful protest. It was frustrating for me.”

Chiefs head coach Andy Reid said he supported the players and recognized that many of them have different opinions.

“I think when you get deep down knowing the guys — and I don’t want to speak for them — that’s their privilege to do that, but just to make America a better place. That’s their primary thing,” Reid said. “I see the work that they do behind the scenes with kids and they want to make sure those kids grow up in a great place and make it even better than what we have. That’s a beautiful part of it. I understand there are two sides to everything. I get it. I’m a coach. I deal with a lot of two sides.”

Chiefs CEO Clark Hunt also issued a statement, as did most team owners, expressing support for the players who choose to protest.

“I believe in honoring the American flag and supporting all of those whose sacrifices protect the many freedoms we have in this country, including the right to have differences of opinion,” Hunt said. “Sports have long been a unifying force — especially in challenging times — and hatred and division have no place in our game. As a nation, we face serious challenges, and I believe as Americans, each of us has a responsibility to engage one another with empathy and humility to gain a better understanding of ways we can work together to solve these difficult issues.”