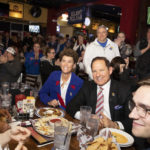 Newly-hired Kansas head football coach Les Miles sits next to his wife Kathy as they listen to Kansas athletic director Jeff Long tell a story about hiring Miles during the Hawk Talk radio show on Sunday, Nov. 18, 2018 at Johnny's West in Lawrence. Miles was announced as the head coach earlier in the day.

Has there ever been so much buzz surrounding a Power Five college football program that enters its final game of the season with a 3-8 record?

Nobody asked us that — at least I don’t think anyone did — over the past couple of days, but it would be a reasonable inquiry.

The Kansas football team, unlike in its primetime faceplant against TCU in 2017, looked relatively competitive this past weekend in a 55-40 loss at Oklahoma on national television.

And the very next day, KU hired Les Miles — he of LSU and 2007 national championship fame — to take over the program.

After year upon year of so many losses in the post-Mark Mangino era, it appears the football team’s supporters finally have a truly optimistic view of where the program is headed next.

Which leads us perfectly into our first actual question for today’s post.

@mctait #AskKUsports can you pass along this suggestion to KU ticket office; 2019 FB season tickets only available in person in Memorial Stadium between 11am-2:30pm next Friday #KUfball #ThankYouSeniors #RockChalk

What a strategy this would be.

If you’ve been paying attention at all to the message being pushed from KU’s athletic director, Jeff Long, and even Miles during his “Hawk Talk” debut earlier this week, the athletic department is wasting no time in trying to rally the fan base to invest in 2019 season tickets.

They’re already available online at KU’s website and the hope, of course, is that WAY more people will want to spend a chunk of their Saturdays at David Booth Kansas Memorial Stadium in the future, because they’re excited about watching the team being led by Miles.

Here’s how many people, according to KU’s numbers, have decided to attend a KU football game in Lawrence this season, which proved to be David Beaty’s last in charge.

That final number is the most appalling because it was clear that day more than half the crowd was there to cheer on Iowa State.

I’m not sure how close we are to KU football games reaching the stadium’s 50,071 capacity. But having Miles in place will definitely help.

Back to the question. If Bradley were in charge, KU football would surely see a ticket sale boost for this week’s Black Friday matchup with Texas. And if the Jayhawks got to play in front of a decent crowd, one feeling good about the program to boot, it would only help their upset bid.

WHERE IS THE PLANE GOING!!!

First off, let me say that the employees at the Lawrence Municipal Airport could not have been more friendly or helpful.

I wish it were possible to fly out of there to cover KU road games because it is so laid back at the tiny airport.

That being said, it’s not as if the people who covered this KU coaching search were camping out there around the clock — thankfully.

The fact that the jets were never headed to or from Baton Rouge, La., even though flight plans had been submitted for them was a bit maddening.

Long clearly had some fun with the search by creating these fake flights. But in doing so all he accomplished was making sure media would cover his trips on those days. If KU’s jet only had flight plans for Dallas and Colorado Springs, Colo., there wouldn’t have been nearly that amount of intrigue.

While staking out the airport isn’t exactly my ideal weekday night, at least it was a break from the norm, and there always was that fleeting chance that you would see a football coach getting off a plane.

Email from Sam Bruning: Have you heard anything about Lance Legendre keeping interest in KU and do you see Miles going after him or a trying to get Graham Mertz late?

Based on conversations I’ve had with those who cover recruiting, including Jon Kirby of Jayhawk Slant and Scott Chasen of 247 Sports, I don’t think there is any reason at this point to believe former KU commit Lance LeGendre will hop back on board.

It’s a good question, though, because LeGendre, a four-star dual-threat QB, is from Warren Easton High, in New Orleans, where KU running backs coach Tony Hull first made a name for himself as a high school head coach.  And LeGendre has offers from various SEC programs, including Alabama. Miles paid attention to the high school scene in Louisiana these past two years, often attending games. He surely knows of LeGendre and has opinions about the prep QB’s abilities.

We’ll have to see in the weeks ahead whether Miles has any interest in trying to get the Louisiana QB re-interested in KU.

As for Graham Mertz, even though he is from Overland Park, he has been committed to Wisconsin for more than a year. He chose the Badgers over KU back then and has since picked up offers from college football powerhouses such as Ohio State, Alabama and Clemson, among others. If he for some reason decided to back out of his pledge to Wisconsin, he would have better options than KU. I don’t see it happening.

Doug Stewart: What do you think the #kufball recruiting class looks like under new head coach? Best case? Worst-case?

If Miles can get his coordinators and assistants in place quickly, and all of them have been active college coaches this past season, I think that’s the best possible outcome for a 2019 recruiting class, which Miles told the Journal-World he expects to include 15 signees.

Miles already has gotten out in front with recruiting, too. Jayhawk Slant reported KU’s next head coach already reached out to three-star cornerback Jayden Russell, a top 2019 prospect in the Sunflower State, from St. Thomas Aquinas.

That’s a great place to start and, if all goes perfectly for Miles and his first staff, Miles’ reputation will make it easier for Kansas to land quality prospects, such as Russell.

Worst case scenario: There is such little time between now and the early signing period in late December that KU misses out on its biggest recruiting targets and has to settle for leftovers in the Class of 2019, because the players at the top of KU’s list already have longstanding relationships with other college staffs.

Will Clint Bowen stay on? Pros or cons of that?
Will Beaty stay on in any capacity? Isn’t he supposed to have Texas connections, if we have to pay why not give him a different job to do?
Perspective assistant coaches?
@askKUsports

It’s too early to know for sure whether Bowen would be retained by Miles.

But I think Bowen would be open to doing so. Miles most likely wouldn’t ask Bowen to remain defensive coordinator, though. If Bowen sticks around and helps with the transition, he would probably be a position coach — cornerbacks, safeties or linebackers.

David Beaty is out of here. I’m sure he will be happy to join the staff of some other Power Five program, even if it is just as an analyst or recruiting coordinator in 2019.

In the meantime, I don’t think we should completely rule out the idea of Jedd Fisch, who met with Jeff Long during his coaching search, being an offensive coordinator with Miles. And Jon Kirby of Jayhawk Slant had an interesting defensive coordinator to consider: John Papuchis, currently the D.C. at UNC. Papuchis worked with Miles for a few years when he first took over at LSU.