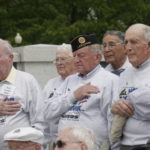 Veterans listen as the national anthem is sung during a ceremony at the World War II Memorial April 30 in Washington, D.C.

He runs his fingers over the letters: “Battle of the Bulge.”

The sun makes the granite sparkle, and a flag snaps to attention in the wind.

This, Jones says, is a peaceful place.

The Lawrence resident has waited more than 60 years for this moment. This is the National World War II Memorial in Washington, D.C. – a memorial for his war, the one he fought in and the one in which he was captured during the Battle of the Bulge. He spent four months as a prisoner of war in Germany.

Jones, 85, is here because of a small town and a physician’s assistant.

The small town is Lyndon, about 55 miles southwest of Lawrence in Osage County. Brian Spencer, the school superintendent there, started thinking last year about the number of World War II veterans who would never see the national WWII memorial, which was completed in 2004.

“As a society, as a country, we haven’t done a very good job of taking care of our World War II veterans and rewarding them and thanking them for what they did,” Spencer says. “I thought right here in Osage County, we can do better than that.”

It was around that time he heard about the physician’s assistant.

Earl Morse routinely works with veterans through his job at a medical clinic in Springfield, Ohio. In 2004, the retired Air Force captain, offered to personally fly one of his veteran patients to Washington to see the memorial.

When the veteran started crying, Morse knew what he had to do. He took the man to the nation’s capital, then started a national program to get more veterans to Washington.

To date, Honor Flight has flown some 7,000 veterans to see the war memorial, free of charge. Private donations fund the organization. So far, the focus has mainly been on World War II veterans, though Korean and Vietnam war vets who have terminal illnesses are moved to the front of the line.

Spencer signed up the Lyndon school district to be the first Honor Flight hub in Kansas. Students accompany the seniors on the flights, allowing them to get a first-hand look at history.

This April 30 trip is the second Honor Flight trip from Kansas. The first came in November, and the third was May 3. (Two more Lawrence residents were aboard that flight.)

The day started early, with the bus boarding in Lyndon at 3:45 a.m. Other veterans met the bus along the way, and some met at the Kansas City airport.

On board the flight, from the middle seat, Virginia Visser looks out the plane’s window. An employee at Kansas City International Airport is standing on the tarmac with two American flags in her hands, paying tribute to the 35 World War II veterans, mostly from Kansas, on this April 30 flight.

She looks around the plane. Tufts of white hair peek out from ballcaps announcing the men’s service branch.

Visser, 85, was an Army nurse during World War II. She now lives in Lawrence.

Arriving at Baltimore, the veterans walk out – and some roll out in wheelchairs – to a standing ovation from those in the terminal.

“Ladies and gentlemen, this flight out of Kansas City has 35 World War II veterans on board,” an airline employee announces. “We’d like you to show your appreciation for their service as they deplane.”

Sure, this day is about seeing the memorial, trip organizer Angie Payne, of Lyndon, says. But it’s about more than that.

“They finally get that feeling of appreciation and gratitude they’ve missed out on before,” she says.

One by one, the veterans get off the bus and walk slowly toward the memorial.

They’re greeted by a familiar face: former U.S. Sen. Bob Dole, the Kansas Republican and World War II veteran who served as fundraising chairman for the memorial. Dole staffers say he perks up whenever there are veterans from Kansas in town.

Inside the memorial, the veterans sing “God Bless America” and lay a wreath at the Kansas pillar, one of 56 representing states and territories involved in the war.

Before the trip, Visser said she wasn’t sure what her reaction would be when she finally saw the completed memorial.

“To see this completed, it’s just overwhelming,” she says. “You think of all the veterans who are here, who have come here. We placed a wreath, and it has great meaning.”

“This visit fits in very well with what I experienced in World War II, and sort of puts a cap on it by visiting this wonderful memorial,” he says.

The stop is brief, maybe an hour in all, as are stops at the Vietnam, Korean and Iwo Jima memorials. Then, it’s dinner and time to fly back to Kansas City.

A whirlwind trip, yes. But these veterans fought for the memorial.