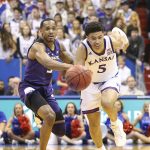 With the days remaining in the regular season numbered, so, too, are the opportunities for the Kansas basketball team to finally turn a corner and — just maybe — win at least a share of the Big 12 title.

A foregone conclusion most years under head coach Bill Self, a conference championship is a mere possibility for his Jayhawks right now.

Tied for third place in the league standings with Baylor and one game back of co-leaders Texas Tech and Kansas State with three games remaining for each of the contenders, wins are now a necessity for KU in order for the 14-time defending champs to extend the program’s historic run.

Self has preached the importance of this group of Jayhawks chasing the 2019 title as opposed to them worrying about extending the streak. Even so, he thinks the gravity of their current situation — to reach first place they have to win out and hope both Texas Tech and K-State lose another game — could provide additional fuel to their final push.

In their uphill pursuit of a league title, two glaring obstacles remain. This Kansas team (21-7 overall, 10-5 Big 12), which is 2-7 on the road, must win back-to-back road games: Saturday at Oklahoma State and Tuesday at Oklahoma.

Now that there’s a palpable urgency to their circumstances, will that spark the Jayhawks on the road?

“Maybe. I don’t know,” Self admitted on Thursday, during his weekly press conference. “We haven’t really talked about that a lot, but our back is against the wall. It’ll be against the wall until the regular season’s over, and then everybody’s backs are against the wall in the postseason, because it’s potentially one and done.”

In the meantime, KU’s relatively dire outlook in the Big 12 title race may not end up being detrimental to its players.

“I would say if anything it should bring out a sense of urgency,” Self said, “that maybe hasn’t been very consistent for the most part during conference play.”

The Jayhawks’ imperative to improve felt like a now or never venture after Texas Tech decimated them, 91-62, in Lubbock, Texas.

KU junior forward Dedric Lawson said from a personal standpoint he returned to Lawrence intent on playing better defense after that drubbing at Tech.

“Those guys, they made so many shots,” Lawson said of the Red Raiders’ 60.7-percent performance. “You could say that they were on fire, or you could say a couple other things — we gave them open shots to get confident. When they got confident the basket got big and they made those shots.”

It appeared Lawson wasn’t the only Jayhawk to use a disappointing defeat as motivation. KU turned in one of its best team defensive efforts of the season two nights later with K-State visiting Allen Fieldhouse.

The Wildcats shot just 31.6 percent from the field — the lowest mark by a Big 12 opponent of KU this year.

Of course, Self enjoyed coaching a team that played with some tenacity.

“Oh, God, we saw a ton of it. Everybody that watched I’m sure saw that was definitely a different energetic type team,” Self said of the Jayhawks’ play in a must-win Sunflower Showdown. “Didn’t matter that we — it looked like we played well, when we really didn’t play that well. It’s just that we made them not play well at all offensively. That’s the key right there. I think it shows up more on the defensive end than anything else.”

In fact, it will be KU’s defense that it must be sure to pack and bring with it on its two trips south in the next five days. In going 2-5 in Big 12 road games so far, the Jayhawks have allowed the home team to shoot 43 percent or better in four of those defeats.

“We just have to find that mode,” Dotson said of playing high-level defense away from Allen Fieldhouse, “and find what it takes for us to really just lock in and get defensive stops, carry that on the road or wherever that is.”

Given their struggles, do the Jayhawks feel as though they have played well defensively on the road at some point this season?

“On the road, I mean, are you counting neutral sites games?” Dotson wondered.

No. Let’s stick to games that were played in true road environments.

“I thought Baylor,” Dotson responded. “That first half we really shut them out pretty good. We just need to carry that over every game.”

Kansas won in Waco, Texas, on Jan. 12 in large part by limiting the Bears to 33.3-percent shooting. It was one of only two times this year that the Jayhawks have gone on the road and kept an opponent under 40 percent.

The Jayhawks feed off the crowd in home games, Self said, for defensive energy. The coach pointed out they will need a “workman like attitude” to match in the days ahead the type of effort they showed against K-State on Big Monday.

“You can’t get giddy because you did it one game in a row. You’ve got to string a series of games in a row to say that you’re actually becoming elite defensively. We’re not close to being there yet,” Self said of a KU team that entered Thursday ranked 16th nationally in adjusted defensive efficiency by KenPom.com.

“But I do think that, you know, the sense of urgency, back against the wall and the understanding that the road hasn’t been good to us this year,” Self added, “we’ve got to be different from what we have been.”