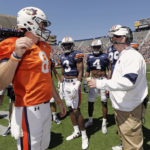 Hired Dec. 3 to become the first offensive coordinator under new Kansas football coach Les Miles, Chip Lindsey is reportedly already on his way out of town.

After a couple of previous reports linked Lindsey to the head coaching job at Troy, both Football Scoop and Pete Thamel of Yahoo Sports reported Wednesday evening that Lindsey, KU’s OC and quarterbacks coach, will be named Troy’s next coach.

A KU spokesperson said Miles had no comment on the reports at this time.

In the day leading up to the news of Lindsey’s reported departure, Adam Rittenberg of ESPN and Justin McNelley of WDFX/WSFA in Alabama, reported Lindsey, once the quarterbacks coach at Troy, had spoken with the university during its search for a new head coach.

Former Troy head coach Neal Brown left the program this past week to take over at West Virginia, once former Mountaineers coach Dana Holgorsen moved on to coach at Houston.

Lindsey only spent the 2010 season at Troy, serving as the QBs coach on Larry Blakeney’s staff, but the Sun Belt Conference football program is located in Lindsey’s home state, and Lindsey spent the majority of his early coaching career as a high school coach in Alabama.

Upon joining Miles’ staff just more than five weeks ago, Lindsey signed a four-year term sheet with KU, with Kansas Athletics holding an option for the final year of the deal. However, the terms state Lindsey can leave to become an FBS head coach without being bought out.

Miles hired Lindsey away from Auburn, where he was the offensive coordinator and QBs coach the previous two seasons.