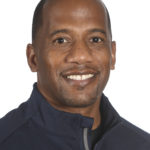 In his brief time as the wide receivers coach at the University of Kansas, Emmett Jones has been active on the recruiting front, telling prospects about the program now being run by head coach Les Miles.

So how does Jones sell players on the idea of joining the Jayhawks?

Let him stop you right there.

“I never call it a sales pitch. I like to just speak the truth,” Jones said recently, during an interview with Brian Hanni, KU director of broadcasting and play-by-play voice of the Jayhawks.

Jones, who has not yet been made available for interviews with local media outlets, explained that when he was a high school head coach in Dallas, he used to be on the other end of such recruiting encounters. Jones, who would go on to become the outside receivers coach at Texas Tech before joining KU, decided back during his days working in the prep ranks how he would handle conversations with a recruit.

“When those guys used to come in and visit me, if they ever gave me the vibe they were trying to sell something, that wasn’t a good vibe that I liked. So I just like to speak the truth,” Jones said of his style as a recruiter.

One of the facts about KU football that Jones won’t run away from is the program’s recent struggles. The team’s new receivers coach points to the future when telling prospects about KU.

“Everybody knows about the University of Kansas and where it’s been the last few years. It’s not always going to stay like that,” Jones predicted. “They know everything about Les Miles and where he comes from, and the success he had at Oklahoma State, the success he had at LSU, the type of players he’s been around. And he’s just a good guy, man. He wants to succeed and he’s going to surround himself with a great staff.”

Of course, one key Miles assistant, Chip Lindsey, will be in charge of catching the Jayhawks’ offense up with the rest of the Big 12.

So Jones feels genuine when telling players about the positives of becoming a Jayhawk.

“Being in the Big 12, leaving your legacy here at Kansas, just speaking the truth about those guys and the direction we’re going from an offensive standpoint, and having the chance to play for somebody like coach Miles, it’s all up-and-coming,” Jones said, adding that KU’s facilities “blew me away.”

At Texas Tech, Jones built a reputation as a successful recruiter in the Dallas-Fort Worth Metroplex. The former Dallas Skyline and South Oak Cliff high school coach said the relationships he developed back then allow him to be viewed as a trustworthy recruiter and college assistant.

Before high school coaches and families of players feel comfortable sending an athlete off somewhere, Jones explained, they need to feel contented with members of a college football staff.

“You want those guys to take care of your players, off the field, especially. So that’s a sense of comfort when they’re dealing with me as a coach,” Jones said, “because they know exactly what I’m about.”