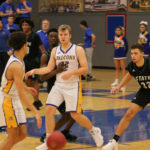 OLATHE — More often than not, college freshmen from the visiting teams miss late-game shots in Allen Fieldhouse thanks to the loud, crazy atmosphere that makes it so historic.

On Tuesday, the main gym at Olathe South was as close to that as you might get. With the game tied, sophomore Andrew Piper found himself at the free-throw line, with the Firebirds tied at 58 and 3.4 seconds left on the clock.

“It was really crazy,” Piper said.

After missing his first shot, Piper silenced the home crowd with a free throw to put the Firebirds ahead by a point, as they went on to win 59-58.

“Helping a team win is the best thing,” Piper said. “We played pretty well, we got the win and we still have work to do.”

Before being fouled, Piper had started, but only scored a basket on two shot attempts. Heading to the line, FSHS head coach Sam Stroh felt confident knowing he was in a position to give the team success.

“He’s a good shooter,” Stroh said. “He’s a young, inexperienced player, but it’s good for our team, not just for Andrew, but for anyone to be in that situation.”

Thanks to consistent shooters in senior Noah Butler and junior DK Middleton, the Firebirds (4-1, 3-1 Sunflower League) were able to trade baskets and stay within a reach on the road. Off the bench, senior Jaxon Malone’s first shot of the game, a made 3-pointer, put the Firebirds ahead in the third quarter after battling a halftime deficit.

“(Jaxon) is a guy that hasn’t gotten a lot of playing time, and I told him his opportunity would come and he maximized it,” Stroh said. “We don’t win the game without him. Big shot from him.”

Butler got into foul trouble by the half, but stayed in the game even after drawing his fourth in the fourth quarter. Ethan Lincoln also was on the court with four fouls at a crucial time.

Forwards Turner Corcoran, Ryan Stacey and Jaxson Webb came in and added pressure on South’s standout guards Branden Eckles and Kobe McKinney, who both finished with at least 15 points. Eckles fouled out with a minute to go in the fourth quarter.

Middleton finished as the leading scorer with 18 on 8-of-11 shooting. Butler added 15 points, and Downing added 12 points on solely free throws.

“I just focus on the rim, everything else is just a distraction, and I don’t worry about distractions,” Downing said. “We practice (free throws) a lot, at the end of practice, middle of practice. When we have nothing to do in between drills, we shoot free throws.”

Free State will travel to Olathe Northwest at 7 p.m. Friday.