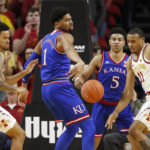 Following its second loss of the season, Kansas dropped two spots in the latest AP poll, which was released Monday afternoon.

The Jayhawks (12-2, 1-1 Big 12) are No. 7 in the latest rankings, falling from No. 5 after splitting their two games last week. Kansas defeated Oklahoma by a 70-63 margin in the Big 12 opener before dropping a 77-60 decision at Iowa State this past weekend.

One day after its loss to ISU, Kansas announced that starting center Udoka Azubuike would be out for the rest of the season. In addition, the No. 7 ranking is KU’s worst of the season, meaning this has been a pretty forgettable three-day stretch for the Jayhawks.

With that being said, let’s dive into this week’s top takeaways from the latest AP poll:

No first-place votes for Kansas

For the first time all season, Kansas did not receive any first-place votes in the latest AP poll. KU’s highest ranking this week was actually No. 5, which was courtesy of two different AP voters.

A total of four teams were given first-place votes, including 37 for No. 1 Duke. Despite being No. 3, Tennessee actually received the second-most votes with 13. No. 2 Michigan was given nine such votes, while No. 4 Virginia earned five.

Since falling from No. 1 after its loss at Arizona State, Kansas had received four first-place votes in each of the previous two polls. Prior to that, the Jayhawks had earned 57 and 56 first-place votes in Week 6 and Week 7, respectively, during their two-week stretch at No. 1.

KU had double-digit first-place votes in all but one week between the preseason poll and Week 5.

But this is the first time since last season that Kansas did not get any consideration for the top team. In fact, Kansas earned only three first-place votes all last year, two of which came in the second week in the season. The lone other first-place vote was given to the Jayhawks in the preseason poll.

It remains to be seen whether or not Kansas will earn another first-place vote this season, though that may be difficult given how top-heavy college basketball is this year. Still, the nine weeks of first-place recognition marks the most for the Jayhawks in a single season since they earned first-place votes in 14 of the 19 weeks during the 2015-16 campaign.

TCU enters AP poll ahead of tilt with KU

There are no easy nights in the Big 12, particularly for the start of the conference play for the defending champs.

Following its first league loss of the year, Kansas will get its third ranked foe in as many games to start Big 12 play when it plays host to TCU at 8 p.m. Wednesday. The Horned Frogs returned to the poll Monday, earning a No. 25 ranking following their win over Baylor this past weekend.

TCU is a nine-game win streak since dropping a 73-64 decision to Lipscomb at home, which dropped the Horned Frogs from No. 18 to unranked in the AP poll. This week, TCU is back and was even listed as a high as No. 17 on one ballot.

Computers or sports writers? Which side are you on?

Just hours before the newest AP poll came out, I chose to look at the different rankings in the advanced metrics world. It is no secret that this particular KU team can be hard to figure out, which was evident in all the different analytical rankings.

The Jeff Sagarin rankings had the Jayhawks the highest among the computer rankings at No. 9. Ken Pomeroy has dropped his preseason No. 1 team all the way down to No. 10 over at KenPom.com.

Bart Torvik has KU at No. 16 in his most recent update, while Haslametrics is the lowest on Kansas with a No. 30 ranking on its website. All this is to say that not even the computers can quite pinpoint where Kansas belongs in college basketball.

None of this means much for which team is going to cut down the nets in April, of course. To me, it is just fascinating that the AP voters are higher on the Jayhawks than the computers at this point in the season.