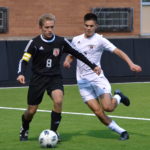 Lawrence High senior Will Yanek fights for possession with a Free State player during the City Showdown on Wednesday, Oct. 10, 2018. The Lions claimed a 2-0 win over the Firebirds.

As soon as the match ended, the Lawrence High boys soccer team rushed over to the student section.

Lawrence celebrated with its fanbase in the moments following a 2-0 victory over Free State High School Wednesday at LHS. It was an impressive win for the Lions, who had notched two ties and one loss in the previous three meetings with the Firebirds.

“This is such a great atmosphere,” LHS head coach Mike Murphy said. “These kids have known each other their whole lives. It’s a lot of bragging rights when you play this team. I’m just so proud of them, and hopefully we can build off this to finish the season strong.”

The Lions (6-5-2) jumped out to an early lead and never looked back against the Firebirds (4-6-1) during the latest installment of the City Showdown.

In the 18th minute, LHS scored on a set piece via a corner play. Senior Cole Shupert lofted the ball up near the net, and senior Nathan Stoddard came through with a header to notch his second goal of the season.

“I just knew something good was going to happen,” Stoddard said. “The team has been working hard for this. Our motto here at Lawrence High is that we play with heart. We wanted to win this game.”

The rest of the first half was a defensive battle, which was really on display for much of the night.

LHS senior Ross Brungardt tallied multiple saves en route to another clean sheet, while Free State’s Will Davis made multiple stops in the net. Senior Jack Anderson and sophomore Tanner Glanton contributed to a flawless defensive performance for the Lions.

However, the Firebirds played a strong defensive game, as well. Junior Hayden Robinson, along with seniors Emil Ivanov and Landon Sloan, stalled multiple attacks by the LHS offense, which were mostly created by senior Will Yanek, along with sophomore forwards Wheeler Battaglia-Davis and Mason Anderson.

“On defense, we are really solid,” Sloan said. “We got very unlucky twice, which is unfortunate. I think we need to work on finishing as a team. We have been working on creating more chances.” 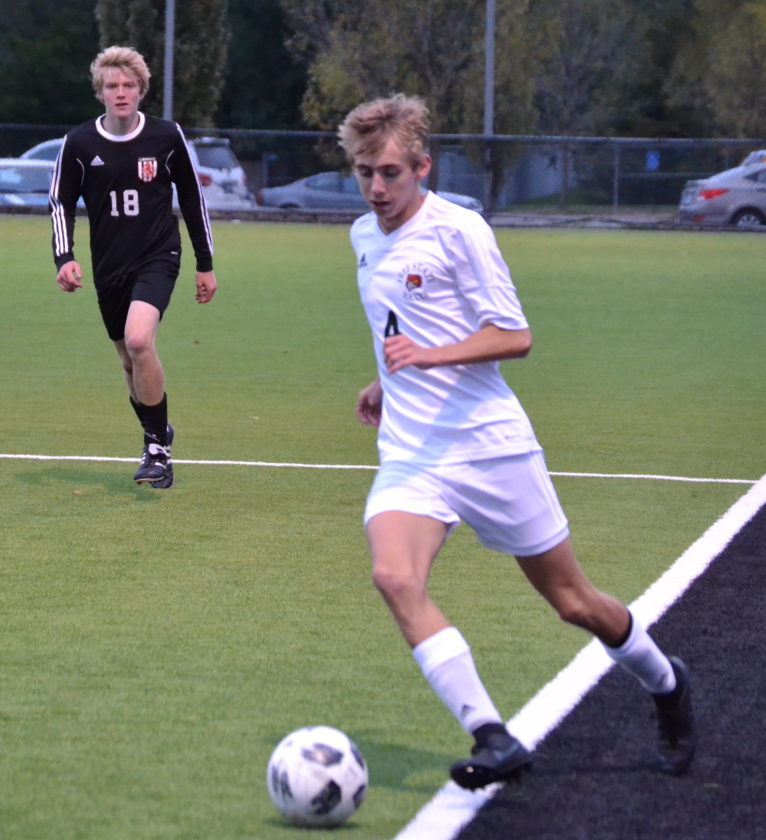 Free State senior Landon Sloan saves the ball during a match with Lawrence High at LHS on Wednesday, Oct. 10, 2018. The Lions recorded a 2-0 win in this year’s City Showdown.

LHS added some insurance with 23 minutes left on a strike by junior Kanak Masten on the assist by Stoddard. Masten then ran to the corner of the field, where he was mobbed by his teammates.

“That goal saved us the game,” Stoddard said. “We were working really hard on defense. After that goal, we just had it in the bag.”

Free State had some decent looks down the stretch, as junior Pete Junge and senior Everett Waechter misfired on their attempts in the final minutes.

But the Firebirds will be forced to move on from this loss quickly, as they enter a rough stretch. Free State plays three more matches over the next three days, including a road tilt with Gardner Edgerton at 7 p.m. Thursday.

“We have to stay focused,” Sloan said. “We can’t really sit on this one for too long. We still have some pieces to fix, we just don’t have the time to fix it.”

“We have made a few subtle changes,” Murphy said. “We haven’t changed formations or anything, just moving guys around a little bit. I think we feel really good about where we are at right now.”