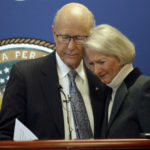 Sen. Pat Roberts, R-Kan. and his wife Franki hug after making an announcement at the Kansas Department of Agriculture in Manhattan, Kan., Friday, Jan. 4, 2019. Roberts will not run for re-election in 2020. (AP Photo/Orlin Wagner)

MANHATTAN — Republican Sen. Pat Roberts, the longest-serving member of Congress in Kansas history, announced Friday that he won’t run again in 2020, setting up a scramble to replace him in a GOP-leaning state where Democrats are energized by key victories in last year’s midterm elections.

The 82-year-old, four-term senator was likely to have faced grueling primary and general election contests next year, just as he did in 2014 when his longevity on Capitol Hill became a political liability for him.

Democrats haven’t won a Senate seat in Kansas since 1932. However, Democrat Laura Kelly won the governor’s race in November and the state’s previously all-GOP congressional delegation gained a Democrat when Sharice Davids was elected in a Kansas City-area district.

Roberts was facing some pressure to step aside, though he said after announcing his decision that he did not feel pushed out.

“No, no, just the opposite,” Roberts said. “As I talked to people who helped me, they said, ‘Oh, you could give it another shot — and I could — but I think it’s just time.”

Roberts is the second veteran GOP senator to announce plans not to seek re-election in 2020, after Tennessee’s Lamar Alexander. Roberts promised “a sprint to the finish line” of his last term and touted a long list of accomplishments that included serving as chairman of both the House and Senate agriculture committees and passage of a massive farm bill last month.

He made his announcement at the Kansas Department of Agriculture’s headquarters near the campus of his alma mater, Kansas State University. K-State is the site of the under-construction, $1.25 billion National Bio and Agro-defense Facility, a new biosecurity lab due to open by 2023 and a project Roberts championed.

Though Roberts saw the passage of the farm bill as a major accomplishment and touted his work with Democratic Sen. Debbie Stabenow of Michigan, he drew criticism from some GOP conservatives because the legislation reauthorized agriculture and conservation programs worth $400 billion over five years but failed to tighten work requirements for recipients of food stamps as some Republicans wanted. He touted his ability to build trust with Stabenow and between their staffs and lamented that bipartisanship is becoming less common.

“I’ve always tried to be friends with everybody, and it certainly paid off in the farm bill,” Roberts said. “Politics has changed, rather dramatically.”

Roberts’ career on Capitol Hill began in 1967 as a congressional aide. He won a House seat representing western Kansas in 1980 and was elected to the Senate in 1996, when popular moderate Republican Sen. Nancy Kassebaum Baker decided not to seek re-election.

Roberts will leave office never having lost a race.

Through much of his career, Roberts had a knack for corralling the support of both conservative and moderate wings of the Kansas GOP. He’s scored easy election victories throughout his career. But his seat was in play in 2014 as Republicans sought to reclaim a Senate majority, after opponents on both the right and left painted him as an out-of-touch Washington insider.

Critics mocked him for claiming his home was in Dodge City, the iconic former Wild West town, even though he maintained a residence in the Washington area. Roberts hurt his re-election bid by joking that renting space in the home of two Dodge City supporters gave him full access to a recliner. He bought a home in Topeka in 2016.

In 2014, Roberts captured less than 50 percent of the vote in a four-person primary after a spirited challenge from tea party candidate Milton Wolf, a Kansas City-area radiologist. The Democratic nominee dropped out, giving independent candidate Greg Orman, a Kansas City-area businessman, a cleaner shot at Roberts. The national GOP quickly retooled Roberts’ campaign.

The resulting national spotlight was unlike anything Roberts had seen during his previous campaigns.

Roberts also served four years as the Senate Intelligence Committee chairman, presiding over intensely partisan hearings over the intelligence before the 2003 invasion of Iraq. He left the chairmanship in 2006, after anger over the war cost Republicans their Senate majority.

Rep. Roger Marshall, a Republican who holds the same western Kansas seat Roberts once did, is seriously considering running for Roberts’ seat, a spokesman said Friday. Other potential GOP candidates include departing Gov. Jeff Colyer and outgoing Kansas Secretary of State Kris Kobach, who lost to Kelly in the governor’s race.