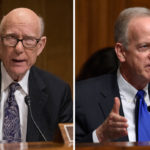 Meanwhile, a University of Kansas law professor who specializes in international trade law called it a significant improvement over the original NAFTA, although not as significant as the broader Trans-Pacific Partnership, which included 11 additional countries, but which President Donald Trump withdrew from early in his administration.

The new agreement, which still needs approval from Congress, is intended to replace the 24-year-old North American Free Trade Agreement, or NAFTA, which President Donald Trump had threatened to withdraw from if the other two countries didn’t renegotiate its terms. Although many are calling it “NAFTA 2.0,” it is officially known as the U.S.-Canada-Mexico Agreement, or USCMA.

Bhala said the proposed new deal made a number of significant changes and updates to the original NAFTA, including stronger protections for workers’ rights to organize, stricter environmental requirements and more protections for women and LGBT individuals from workplace discrimination in the three countries.

According to information from the White House, the proposed new trade pact also contains a number of new provisions important to Kansas, including:

• An agreement by all three nations not to use export subsidies for agricultural products exported to one another’s markets.

• An agreement by Canada to grade U.S. wheat imports in a manner no less favorable than it accords Canadian wheat and not to require a country of origin statement on its quality grade or inspection certificate.

• A requirement that 40-45 percent of automobiles produced within the three nations be made by workers earning the U.S. equivalent of at least $16 an hour.

• And another requirement that at least 75 percent of the content of all automobiles produced within the three nations be produced in North America.

Mexico signed onto the agreement with the U.S. last month, but Canada had withheld its support, which had prompted fear among some in Kansas that the new agreement would leave Canada out. Canada, however, agreed to sign onto the deal late Sunday night, just before the Trump administration’s midnight deadline.

Speaking on the floor of the Senate Monday afternoon, U.S. Sen. Jerry Moran, of Kansas, said he was relieved that the administration finally reached a deal with Canada.

“As I conveyed to the president when a bilateral U.S.-Mexico agreement was announced, a final agreement without Canada would be a significant step backward from the agreement in place today,” Moran said.

“A trilateral agreement is also critical for aerospace, auto and other manufacturers in Kansas who rely upon an integrated supply chain,” he said. “Withdrawing from NAFTA and excluding Canada would have disrupted markets and cost Kansas jobs.”

In a separate statement released Monday morning, Kansas U.S. Sen. Pat Roberts, who chairs the Senate Agriculture Committee, said he also believes the deal will be good for Kansas.

“I’m pleased to see the U.S., Canada, and Mexico have successfully delivered a renegotiated NAFTA for consideration, and I am eager to review the details,” Roberts said in the statement. “This trade pact will provide our farmers and ranchers with much needed export market certainty and will strengthen the relationship with two of our most important trading partners.”

Congress is not expected to vote on ratifying the agreement until sometime after the first of the year, which means its fate will be determined by the winners of this year’s midterm elections.

Paul Davis, the Democratic candidate in the 2nd District congressional race, said through a spokeswoman that he wanted to learn more about the details of the proposed agreement.

“Paul is dedicated to trade deals that are in the best interest of American workers,” his spokeswoman Kelsi Browning said in an email. “He looks forward to reviewing the agreement and ensuring it meets adequate labor and environmental standards while putting Kansas and Americans first.”

“Early reports suggest this is a positive step forward,” Watkins said in an email statement. “Obviously, I am pleased that Canada and Mexico have agreed to join the new agreement with the United States. The improvements related to expanding access to Canadian dairy markets appear to be promising for Kansas dairy farmers too. Moving forward, it is critical that additional steps be taken regarding the recent tariff escalation as we work towards bringing those down as quickly as possible.”

Bhala, the KU law professor, said he thought it was unlikely that Congress would reject the deal, even if Democrats took control of the House after the 2018 elections, because most Democrats, and their financial backers, are supporters of free trade.

“I think the bigger problem is that the U.S. administration is going to try to oversell this deal,” he said. “Because that’s what the Clinton administration did back in 1994, when they went on ‘Larry King’ touting NAFTA and we all thought it was going to create many jobs, raise our incomes, stop illegal immigration and narcotics trafficking, and Mexico would become a developed country within a few years. Well, a lot of that didn’t happen.”