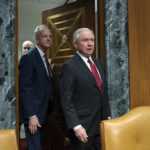 In this file photo from April 25, 2018, Attorney General Jeff Sessions, center, is escorted by Sen. Jerry Moran, R-Kan., as he arrives at a Senate Appropriations subcommittee on Capitol Hill in Washington. (AP Photo/J. Scott Applewhite)

“I expect that during this transition period, the (Justice) Department will make certain federal law enforcement agencies continue to protect our country, carry out the rule of law and allow the Special Counsel investigation to continue unimpeded,” Moran said in a statement late Wednesday.

Moran, a Republican, chairs an appropriations subcommittee that oversees the budget for the Justice Department.

Meanwhile, Kansas’ other senator, Republican Pat Roberts, offered words of support for Sessions without commenting on his ouster or its possible implications for the independent investigation.

“Jeff Sessions has served our nation honorably as Attorney General,” Roberts said in a separate statement. “I am privileged to call him a friend and thank him for a lifetime of public service and an unwavering respect for the rule of law. I wish him well in future endeavors.”

Sessions, a former senator from Alabama, was an early supporter of Trump’s candidacy in 2016 and was named attorney general when Trump took office in 2017. The Senate confirmed him on Feb. 8, 2017. Both Moran and Roberts voted for his confirmation.

During his confirmation hearings, Sessions denied having any contact with Russian officials during the campaign. But a few months later he was forced to recuse himself from overseeing Special Counsel Robert Mueller’s investigation after the Washington Post revealed he had met twice with Russian Ambassador Sergey Kislyak in 2016.

Since then, Trump has railed against Sessions in public and on Twitter. He has also criticized the investigation itself, saying it should be ended and calling it a “hoax” and a “witch hunt.” He has also repeatedly denied any “collusion” between his campaign and Russian officials.

But Trump had stopped short of firing Sessions until Wednesday, the day after the midterm elections.

Although Sessions submitted a letter of resignation on Wednesday, it began with the sentence, “At your request, I am submitting my resignation.”