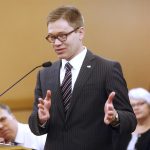 The Senate Commerce committee, on Wednesday March 20, 2019, heard from David Toland during his confirmation hearing before the committee for Secretary of Kansas Department of Commerce. A Senate committee is recommending against confirmation of Toland, Democratic Gov. Laura Kelly's choice for commerce secretary amid Republican concerns about his social media use and past comments criticizing lawmakers. (Thad Allton/The Topeka Capital-Journal via AP)

A two-day Senate Commerce Committee confirmation hearing for Acting Commerce Secretary David Toland turned bitter and partisan as some Republicans questioned his credentials and criticized him over social media posts and comments he made during a Statehouse rally last year.

Toland, from Iola, served as the unpaid treasurer for Kelly’s successful campaign for governor. He also earned praise during his 11 years as executive director of an economic development group, Thrive Allen County, and some credit for helping to attract a new grocery store and gain voter approval for building a new community hospital.

The Senate’s rules require the full chamber to vote on Toland despite the Commerce Committee’s 6-5 vote against him. It’s not clear whether GOP critics can block his confirmation and force him out, but Republicans hold 28 of 40 seats in the chamber.

Several Republicans questioned whether Toland has the right temperament for the job. During a rally in favor of Medicaid expansion last year, Toland criticized its foes, saying he “was not proud of people protecting political fortune over protecting people’s lives.” He was quoted in The Topeka Capital-Journal this week as being “mad as hell” about what he views as distortions of his record.

“We’re talking about tone here and the importance of maintaining tone with the Legislature, specifically those that you ask now to support you,” Rucker told Toland.

Toland said he had worked successfully as a conservative Democrat in a Republican county and “that is reflective of my values.”

Democratic Sen. Tom Holland, of Baldwin City, said some Republicans had “smeared” Toland. Kelly stood by her nominee, calling him “the best and brightest our state has to offer.”

Questions about online posts deemed critical of Republicans surfaced Wednesday, a day after Kelly withdrew a nominee for the state Court of Appeals over political tweets and retweets in 2017. The posts included vulgar language, criticized President Donald Trump and expressed support for gun control and abortion rights.

Photos last year showed Toland’s two children reading to him, with framed pictures of former Republican Gov. Sam Brownback and Sen. Caryn Tyson, a conservative Parker Republican, on the nightstand. The website text urged visitors to check out the lab “if you’re having issues sleeping.”

Toland told the committee Wednesday that the nightstand photos were a “juvenile prank” by his staff that he should not have allowed and apologized.