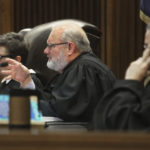 Kansas Supreme Court Justice Lee Johnson asks questions Thursday, March 16, 2017, during oral arguments in a legal fight over a state law banning a second-trimester abortion procedure and the larger question of whether the state constitution's Bill of Rights offered a fundamental right to an abortion. (Thad Allton/The Topeka Capital-Journal via AP, Pool)

TOPEKA — Abortion opponents in Kansas have been bracing themselves for nearly two years for a ruling from the state’s highest court that protects the right to have an abortion and potentially upends politics in a state long at the center of the national debate.

The Kansas Supreme Court is relatively liberal in a state with a Republican-dominated Legislature that has strong anti-abortion majorities.

Court watchers also are asking: Why is it taking so long for the justices to rule?

No one outside the court knows for sure and the justices are not saying, as is their long-standing custom. One educated guess is that they still are wrestling with the implications of declaring that the state constitution protects abortion rights.

That was the core legal issue when the court heard attorneys’ arguments in March 2017 in a major abortion lawsuit . An abortion-rights decision could allow state courts in Kansas to chart their own course on abortion and invalidate restrictions that the federal courts would uphold.

“What’s the test for that?” said Jeffrey Jackson, a Washburn University of Topeka law professor. “There’s any number of weird possible decisions that you can get to.”

GOP conservatives’ power in the Legislature surged following “Summer of Mercy” protests in 1991 against the late Dr. George Tiller’s clinic in Wichita, among a few in the U.S. known to do late-term abortions. An anti-abortion zealot shot Tiller to death in 2009.

“It’s more important than ever for Kansas to recognize that women have protections under the state constitution,” said Genevieve Scott, a Center for Reproductive Rights attorney. “Any time that a court recognizes women’s rights, it has an important impact in shaping our national discourse.”

In 2016, abortion opponents, GOP conservatives and others upset with capital punishment decisions tried unsuccessfully to oust four of those justices when they faced a yes-or-no statewide vote on whether they would remain on the court for another six years. Anti-abortion leaders cited the case now before the court as one reason.

During arguments in the abortion case in 2017, four justices peppered the state’s solicitor general with skeptical questions when he argued that the state constitution cannot protect abortion rights because abortion generally was illegal when it was drafted in 1859.

Mary Kay Culp, executive director of the anti-abortion group Kansans for Life, worries that the decision will make it impossible for legislators “to pass pro-life bills.”

“That’s worst-case scenario, and that’s kind of what we expect,” she said.

Her fears are not unfounded. California voters added a right to privacy to their state’s constitution in 1972, and courts there have struck down even restrictions on public funding for abortions. In 2000, Tennessee’s highest court declared that the state constitution protected abortion rights; abortion foes did not pass an amendment until 2014.

The Kansas case involves the state’s first-in-the-nation ban on a common second trimester procedure. Two abortion providers sued just before the law was supposed to take effect in 2015. It has been on hold since.

A district court judge agreed with their arguments that that broad language in the state constitution’s Bill of Rights implies a right for a woman to obtain an abortion.

The Kansas Supreme Court decision has taken so long that it is compared to a small number of heavily litigated capital punishment cases. Spokeswoman Lisa Taylor said the Supreme Court’s goal is to have 95 percent of its cases decided within nine months of oral arguments.

“It’s a groundbreaking case of first impression, but my goodness, two years?” said Kansas Attorney General Derek Schmidt, a Republican whose office is defending the 2015 law.

The state’s Bill of Rights says Kansas residents have “natural rights,” including “life, liberty and the pursuit of happiness” and that “free governments” are created for their “equal protection and benefit.” Abortion opponents argue that the “life” clause protects the fetus in the womb — not the right to abort it.

“Maybe the fact that it takes so long to figure out whether there’s a previously undiscovered right in the Kansas Constitution suggests they’re having to look awfully hard,” Schmidt said.

Culp believes the Supreme Court didn’t want to issue its decision during the governor’s race last year because it would have hurt Kelly’s campaign by energizing angry anti-abortion voters.

But Jackson said if the justices have concluded that the Kansas Constitution does protect abortion rights, they still must consider how far such protections go. He said they might not have a majority yet for “any single opinion.” He worked for the court several times between 1992 and 2003 and said he saw cases sometimes “going back and forth.”

Abortion rights advocates appear to be less frustrated with the delay because the 2015 law is blocked. Several declined to speculate on what is taking the court so long.

“If the Supreme Court finds a right to abortion in the state constitution — I mean, that is huge,” said Rachel Sweet, policy director for the political affiliate of Planned Parenthood Great Plains.