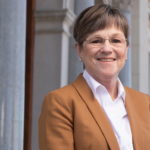 Many locally owned Douglas County businesses will contribute in some way to the festivities when Democrat Laura Kelly is officially sworn in as the state’s governor next week.

Communities from all over the state are providing goods — including flowers, food and music — for Kelly’s inauguration, which will take place Monday in Topeka. Of the 35 businesses contributing, 11 are located in Lawrence, the most of any single town in the state, and one is in Eudora, according to a news release.

“Part of what makes Kansas so special is the immense talent of local farmers, merchants, restaurants and entertainers in our communities,” Kelly said in the news release. “We knew immediately that we wanted to highlight the best that Kansas has to offer through the local vendors featured in the inaugural festivities.”

Ashley All, communications director for Kelly’s transition team, said the local businesses are providing many different type of goods — for instance, the Lawrence restaurant Bon Bon will be providing appetizers.

All said that there was not a specific reason so many Lawrence businesses were selected but that they were businesses that Kelly fostered relationships with during her run for governor.