Kansas bill would crack down on robocalls, fake number spoofing 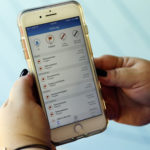 This Tuesday, Aug. 1, 2017, file photo shows a call log displayed via an AT&T app on a cellphone in Orlando, Fla. The app helps locate and block fraudulent calls, although some robocalls do get through. (AP Photo/John Raoux, File)

WICHITA — Shady telemarketers would face a tougher time operating in Kansas under a new bill.

Incoming Republican Rep. Bill Rhiley, of Wellington, says he pre-filed the bill after getting complaints about calls that appear to be from Kansas, but instead are automated sales pitches from telemarketers in other states or overseas.

The Wichita Eagle reports that the bill would set limits on the use of robocalling equipment and crack down on “neighbor spoofing,” the practice of making distant calls display as local numbers on caller ID. Rhiley says he’s recently had telemarketers spoof his own phone number.

One provision of the bill would prohibit anyone, including a phone company, from providing local phone numbers to an out-of-state entity unless the number is openly listed. Rhiley wants consumers to share their stories.