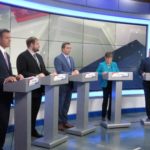 Republican Kris Kobach stood out Tuesday as the only candidate for Kansas governor who would not reinstate an executive order protecting state workers from job discrimination based on sexual orientation or identity.

In a televised debate from KWCH-TV in Wichita, all five candidates for governor were asked whether they would reinstate the executive order that was first issued in 2007 by Democratic Gov. Kathleen Sebelius but that was rescinded in 2015 by Republican Gov. Sam Brownback.

“I will not reinstate the order,” Kobach, the current Kansas secretary of state, said without offering further explanation.

State Sen. Laura Kelly, the Democratic candidate, said she would reinstate the order and that she would take additional actions to prevent discrimination against the LGBT community.

“Further than that, I will try to actually get that into statute so that we don’t have to deal with this with every new administration,” Kelly said. “I’ll also look at laws that we’ve passed that provide for discrimination in adoption situations and see what we can do about getting those off the books.”

That was a reference to a law enacted this year that allows faith-based child welfare agencies to qualify for contracts to provide adoption services, even if they refuse to work with same-sex couples.

“And furthermore, I wouldn’t sign any legislation that discriminates against anybody on any basis,” he said. “I’ve got family members who are gay. I wouldn’t want to tell them that they can’t build a full and complete life in Kansas or that they should in any way be subjected to discrimination.”

“The state should have no right whatsoever to discriminate against individuals,” Caldwell said, adding that reinstating the order would be the second thing he would do as governor, after pardoning all individuals convicted of nonviolent cannabis-related offenses.

Kloos said, “When it comes to the state and state jobs, I don’t believe we should discriminate against people.”