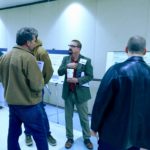 Kris Norton, Kansas Department of Transportation engineer, explains the difference between the current Kansas Highway 10 west leg and the features that will be part of the upgrade of the highway to four lanes from the U.S. 59/Iowa Street interchange to North 1800 Road at a public informational meeting Wednesday, Nov. 14, 2018, at Southwest Middle School.

Notes left on a comment board Wednesday at a public informational meeting on proposed upgrades for Kansas Highway 10 left no doubt about what was on attendees’ minds: “No tolls.”

At the meeting at Southwest Middle School, which the Kansas Department of Transportation hosted to get public feedback on a proposal to expand K-10 to four lanes from the U.S. Highway 59/Iowa Street interchange to North 1800 Road, that sentiment was written on 17 of the 32 notes on the comment board.

According to materials provided at the meeting, which Arellano estimated drew more than 200 people, other funding options include sales taxes, fuel taxes, the use of state general funds, bonds and per-mile road user fees charged to vehicles through electronic monitors.

Aaron Frits, KDOT K-10 west leg project director, said the funding picture would become clearer by the end of the 2019 legislative session in April or May. A Joint Legislative Transportation Vision Task Force is to make its recommendations in January to the Kansas Legislature about what should be included in the next state transportation plan and how improvements should be funded. Additionally, Gov.-elect Laura Kelly could be expected to make transportation funding recommendations, he said.

Although objections to tolls may have dominated the comment board, Frits said the most frequent concern mentioned to him was the need for safety improvements at the K-10/Wakarusa interchange, which is now an at-grade intersection controlled by a traffic signal.

Frits said KDOT engineers were working with Douglas County Public Works director Keith Browning on a plan to make short-term safety improvements at the K-10/Wakarusa Drive intersection and the other four at-grade intersections on the west leg of K-10. Those plans should be released in the coming months, he said.

However, KDOT officials have said there will be no major interchange improvements on the K-10 west leg until the overall improvement project gets underway. That will be at least three years, because that is how long it will take KDOT to complete the environmental impact study, Arellano said.

Daryl Craft, of Lawrence, said he attended the meeting to learn more about the project, but also because he was concerned about congestion and safety with the increased traffic since the opening of the K-10 east leg. He and his wife use the K-10 west leg three to four times a week, he said, but they avoid it during morning rush hours when westbound traffic can be backed up more than a mile from the Wakarusa Drive intersection east to Kasold Drive.

Craft said he also wants to see improvements to the Clinton Parkway interchange.

“That never should have been designed like it is,” he said. “They need to get it right this time.”

Arellano said the public will have further chances to comment as the study moves along. She did not share specific dates, but she said the next public meeting would likely happen in April.

The public can view information on the proposed K-10 west leg improvements and leave comments on the project at slt-ks.org, Arellano said.