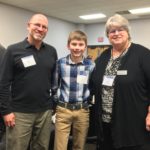 Billy Mills Middle School seventh-grader Jack Tell, center, is shown with his English language arts teacher, Dave Olson, left, and Lawrence Mayor Lisa Larsen at the Kansas League of Municipalities Local Government Day event on Jan. 23, 2019, in Topeka. Jack was a regional winner in the league's annual "If I Were Mayor" memo contest.

If Jack Tell were mayor, Lawrence residents might have to deal with a lot of construction and noise for a little while — but the payoff would be improved bike infrastructure citywide.

The Billy Mills Middle School seventh-grader recently finished as a regional winner in the annual Kansas League of Municipalities “If I Were Mayor” memo contest.

Jack’s plan to make Lawrence more bike-friendly would include “adding bike paths, bike lanes, bike racks, a bike park” and more, he wrote in his memo.

His entry mentioned the health benefits of biking — “It helps your cardiovascular fitness, makes you stronger, decreases stress” and much more, he wrote — plus it’s cheaper than driving, and fewer cars would mean less wear and tear on the roads.

The city might have to raise taxes a bit to pay for the expensive project, he wrote, but it could also seek grants to help cover costs.

“The timing would have to be good and the construction would obviously take a while, and so that would be a drawback of it,” Jack, 12, acknowledged in a phone interview.

The league, a nonprofit organization representing Kansas cities, receives hundreds of entries from seventh-graders statewide for its “If I Were Mayor” memo contest. Jack is one of six regional winners, five of whom traveled through ice and snow to be honored at the league’s Local Government Day celebration on Jan. 23 in Topeka.

Jack said he got to meet several mayors at the event. He also received a plaque and a check for $125.

Jack’s mother, Hannah Tell, said she thinks part of her son’s inspiration came from a recent trip to Boulder, Colo., which the national bike advocacy group PeopleForBikes has ranked as the third-best city for riding in the U.S. She said the family — which includes Jack’s father, Dave Tell, and sister Ashlyn Tell, 11 — biked around the whole city, “and it was so easy.”

“We just had a blast, so I think that may have been in the back of his mind when he was writing that,” she said.

It may also have helped that Hannah works at downtown Lawrence’s Sunflower Outdoor and Bike Shop, Jack’s father added. 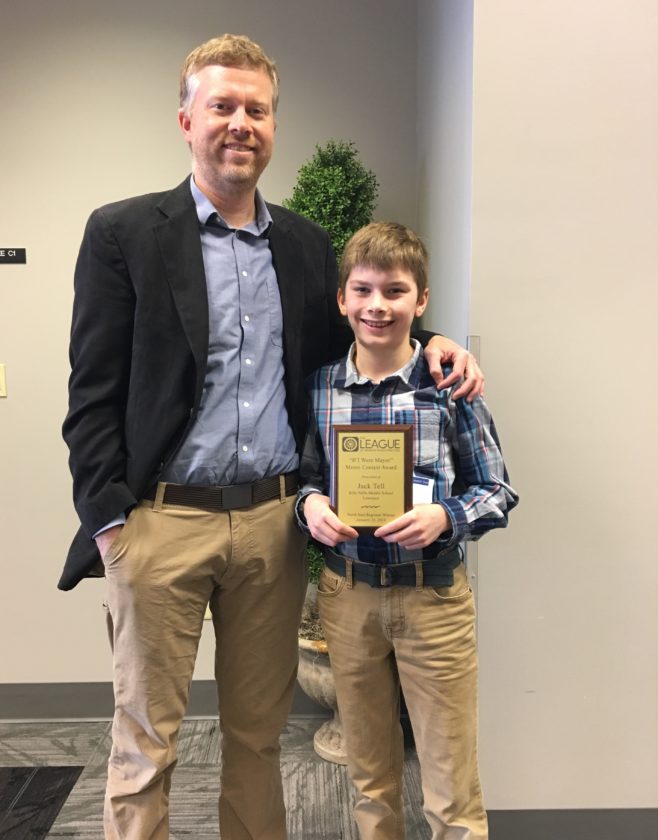 Billy Mills Middle School seventh-grader Jack Tell, right, is shown with his father, Dave Tell, at the Kansas League of Municipalities Local Government Day event on Jan. 23, 2019, in Topeka. Jack was a regional winner in the league’s annual “If I Were Mayor” memo contest.

“He has bikes on the front of his mind a lot,” Dave, a professor of communication studies at the University of Kansas, said.

“He had picked his improvement all on his own, and so I was obviously happy that he chose that one,” Hannah said.

The overall contest winner, according to a news release from the league, was Brent Henry, of Dwight D. Eisenhower Middle School in Goddard. His memo focused on building more accessible and inclusive playgrounds, the release said.

“I thought that was really cool,” Jack said of his peer’s idea.

Hannah said she and Dave are very grateful to Jack’s teachers at the middle school for teaching him so well, and his English language arts teacher, Dave Olson, in particular, for giving Jack this opportunity.

Jack said he approves of the city’s current plans and projects to improve the riding infrastructure around Lawrence, such as the new bike lanes on Massachusetts Street.

So, would Jack want to be mayor for real someday?