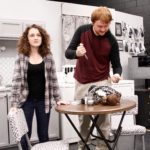 At right, Colton Smith, as bad-guy Harry Roat Jr., prepares to cut open a doll containing heroin that accidently came into the possession of the blind Susy, played by Brynn Kelly, in a scene from Free State High School's fall play, "Wait Until Dark." The two seniors said Wednesday, Dec. 5, 2018, that they were among the 31 students who will stage the play, which was chosen to be performed in January at the Kansas Thespian Festival in Wichita.

Free State High School senior Colton Smith teases that he knew how convincing he was in his performance as knife-wielding felon Harry Roat Jr. from the reaction of faculty.

“My teachers all keep their distance from me,” he said.

Colton, senior Brynn Kelly, who played the blind and resourceful heroine Susy, the rest of the cast and the play’s production crews did more than impress the faculty when they staged the school’s production of “Wait Until Dark” in September. They also impressed judges from Kansas Thespians, who were in the audience evaluating the production as part of the organization’s annual high school adjudicated competition.

The FSHS play was one of three high school productions chosen to be performed at the Kansas Thespians Festival Jan. 3 through 5 in Wichita, said Ericka Waller, FSHS theater instructor. The 31 students making the trip will stage the play at 7 p.m. Friday, Jan. 4 at Wichita’s Century II Performing Arts & Convention Center.

It is the first time a Lawrence school district production has been selected to be performed at the annual event, Waller said. One reason for that is the $500 required to enter the adjudicated competition, which puts a big dent in a high school theater program’s annual budget, she said. Also, Lawrence schools traditionally stage musicals or comedies for fall productions rather than the dramas that turn the heads of judges.

Now in her second year at FSHS after 10 years at Billy Mills Middle School, Waller decided to risk the $500 entry fee because of her confidence in the talent returning this year at FSHS.

“I had a really good feeling about it,” she said. “The quality of the script was good enough. We just had to have actors who were good enough, and we did.”

Waller is also familiar and a fan of the Frederick Knott play, which was first performed on Broadway in 1966 and adapted into a 1967 movie starring Audrey Hepburn as Susy. The plot involves Roat’s murderous determination to retrieve a doll filled with heroin that has fallen into Susy’s possession.

“I’ve been in two productions of the play, once as a professional actor and at South (Billy Mills) Middle School,” she said.

The play’s cast and understudies, the set design and costume design teams, and sound and lighting crews are going to Wichita, Waller said. It’s appropriate, she said, because all aspects of the production were evaluated in the adjudicated competition. One thing that really caught the judge’s attention was the set design of all black, white and shades of gray, which mimicked a black-and-white movie or 1950s TV show — except for a pool of bright red blood at the play’s end.

“That’s one of the things the judges liked,” she said. “They commented on its dramatic effect.”

The play’s two leads were determined to land parts in the production after Waller introduced them to the play and script last spring.

“When I learned what we were doing, I researched and read what it was about and thought, ‘I have to be a part of this,'” Brynn said.

Colton saw the role of Roat as an opportunity to stretch himself as an actor.

“I’ve played a lot of comedic relief parts,” Colton said. “I always wanted to do a dramatic role. This was my chance to step out of my comfort zone.”

Brynn said she watched the movie and got insights on how to move onstage and interact with other actors from a blind man who visited the set.

Olathe West and Maize high schools will also perform plays in Wichita, and students from many other schools will give presentations of various kinds, Waller said. The Wichita performance is the Free State students’ reward, and its production won’t be in competition against the two other plays, she said. The three schools giving performances of their entire plays were selected from 17 schools that each paid the $500 fee to enter the competition.

“We were up against schools with big budgets that bring in Broadway actors to coach students, but when you have talent and present something of quality, good things are going to happen,” Waller said.

The play could have been adjudicated for a national competition, but that required another $1,200 entry fee, Waller said.

Brynn and Colton are both planning to build on the experience they earned at FSHS as they continue their educations. Brynn said she will study theater at an as-yet unselected local university and then move to America’s theater capital of New York to complete her master’s degree. Colton said he plans to enroll in the Savannah (Ga.) College of Art and Design and will study film while remaining active as an actor.

The two seniors are confident the FSHS theater program will remain strong in Waller’s hands. She has an inclusive approach to the program and actively encourages the recruitment of minority and special needs students, they said. The central tenet of the theater program is that anyone can learn to act, they said. Once in the program, all students are part of a big family, Colton said.

“Of all the communities I’ve been involved with, the Free State theater community is the most welcoming,” he said. “I’ve never felt more at home.”