Police investigating reported armed robbery near 23rd and Louisiana; nearby schools on lockdown for about half hour 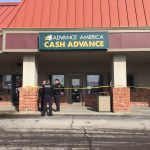 Lawrence police are investigating a report of an armed robbery Thursday morning at a payday loan business near 23rd and Louisiana streets.

Around 10:30 a.m., a man entered Advance America, 2223 Louisiana St., and demanded cash, a spokeswoman for the Lawrence Police Department, Kim Murphree, said in an email. She said the suspect was last seen fleeing westbound on foot.

A complete description of the suspect was not available, and Murphree did not confirm whether he reportedly used a gun during the incident, as initial emergency radio dispatches included.

Police ask anyone with information about the robbery to call the department at 785-832-7501 during regular business hours, or call Douglas County Emergency Communications at 785-832-7509 after hours.

An ambulance was called to the scene, but police there confirmed that no one was injured during the course of the robbery.

“All students and staff are safe,” Julie Boyle, district spokeswoman, said in an email to parents at 11:15 a.m. “We are awaiting the all-clear from the Lawrence Police Department to resume our regular school activities.”

Parents were not informed of the lockdown until nearly a half hour after students and staff at LHS. Reports on social media indicated that during that time, concerned students and parents were texting each other for information about the situation.

LHS staff were told of the security procedures at 10:48 a.m., according to an email from LHS administration to staff.

“Lawrence High is initiating lockdown procedures at this time. There is a report of an armed robbery at 23rd and Louisiana with a suspect possibly in the neighborhood. Because of an abundance of caution, students are not participating in passing periods and are remaining in classrooms,” according to the email from LHS administration to staff.

“There is no immediate threat to any students or staff,” the email said.

The official Lawrence High athletics social media account tweeted at 11:18 a.m. that the school had been given an all-clear from law enforcement.

Boyle sent an email to parents at 11:25 a.m. saying that schools had resumed normal activities “upon receiving additional direction from the Lawrence Police Department.” All students and staff were safe, Boyle said.

In an email at 11:29 a.m. informing media of the end of the lockdown, Boyle noted that Lawrence elementary schools were not in session Thursday because of parent-teacher conferences.

No updates about the initial lockdown or any all-clear were posted to the school district’s social media accounts until 11:35 a.m.

Following multiple weapons- and threat-related incidents in Lawrence schools over the past couple of weeks, Superintendent Anthony Lewis will be hosting a community conversation about public safety at 6:30 p.m. Thursday in the cafeteria of Lawrence High, 1901 Louisiana St.

Check back as this story develops.