For the poor, the safety net in a shutdown doesn’t feel safe 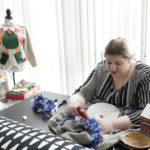 Doris Cochran works on "an ugly sweater," which she is planning to sell, Friday, Jan. 18, 2019 in her apartment in Arlington, Va., Cochran is a disabled mother of two young boys living in subsidized housing in Arlington, Virginia. She’s stockpiling canned foods to try to make sure her family won’t go hungry if her food stamps run out. She says she just doesn’t know “what’s going to happen” and that’s what scares her the most. (AP Photo/Sait Serkan Gurbuz)

WASHINGTON — Doris Cochran, a disabled mother of two young boys, is stockpiling canned foods these days, filling her shelves with noodle soup, green beans, peaches and pears — anything that can last for months or even years. Her pantry looks as though she’s preparing for a winter storm. But she’s just trying to make sure her family won’t go hungry if her food stamps run out.

For those like Cochran who rely on federal aid programs, the social safety net no longer feels so safe.

As the longest government shutdown in U.S. history stretches into a fifth week, millions of poor Americans who depend on food and rental assistance are becoming increasingly worried about the future. Most major aid programs haven’t dried up yet. But each day the stalemate in Washington drags on, the U.S. inches closer to what advocates call a looming emergency. Those dependent on the aid are watching closely under a cloud of stress and anxiety.

“I just don’t know what’s going to happen,” Cochran said, “and that’s what scares me the most.”

With no indication of an imminent compromise, the Trump administration in recent weeks has scrambled to restore some services across the government. But two agencies crucial to the federal safety net — the U.S. Department of Housing and Urban Development and the U.S. Department of Agriculture — remain largely shuttered.

The USDA announced earlier this month that the Supplemental Nutrition Assistance Program, which provides food aid to roughly 40 million Americans, will be fully funded through February. But should the shutdown stretch into March its status is unclear: With just $3 billion in reserves, the USDA won’t be able to cover the roughly $4.8 billion it pays in monthly benefits.

The department was able to stretch the program for another month based on a loophole in a spending bill. But as a result of congressional rules, food stamp benefits allotted for February are being given out early, before Jan. 20. There is no guarantee recipients will get food stamps for March, but if even if the program continues without a lapse recipients would have to stretch their current allotment for at least six weeks, rather than four.

The impact of any lapse in these programs would be dramatic and unprecedented: The USDA says there has never before been a break in food stamp benefits since the program was made permanent in 1964.

Food banks are already stretched thin thanks to a notable spike in demand from furloughed federal employees, contractors and others out of work due to the shutdown, said Carrie Calvert, the managing director for government relations at Feeding America, a hunger relief organization. For every meal Feeding America’s network of food pantries serves, federal food aid provides 12.

“This is a potentially catastrophic situation,” Calvert said. “This could be an immediate emergency that grows exponentially.”

Since the shutdown began, HUD has been unable to renew hundreds of contracts with private building owners who receive significant federal subsidies to provide housing to low-income families, the elderly and people with disabilities. Under these contracts, tenants pay a portion of the rent and the federal government covers the rest. But between December and the end of February, roughly 1,700 contracts are slated to expire, meaning that HUD won’t be able to make their payments. The agency has asked landlords to dip into their reserves to cover rental costs until the government reopens, with a promise of reimbursement.

Similarly, come February, 700 rental assistance contracts administered through a USDA program that offers aid to low-income people in rural areas also will expire. A spokesman said the office “is exploring all options to mitigate any potential negative impact” to tenants.

Those unknowns are causing anxiety and anguish among America’s most vulnerable.

Eneaqua Lewis, 36, lives in a HUD-subsidized apartment on Roosevelt Island in New York City. She said she found out earlier this month her building’s HUD contract expired Jan. 9. Lewis, a single mother raising a 10-year-old, was laid off from a construction job in December. Without an income or any significant savings, Lewis said she’d be forced to drain her meager retirement fund to cover the full amount due with no rental assistance subsidy offsetting the expense.

“People are really afraid right now and just don’t know what to do,” Lewis said. “I can’t afford market rate rent here. Where would I go? Where would everyone go? One side of the building is all elderly or handicapped. The other side is all families. Where would we all go?”

For Cochran, the mother stockpiling food, a disruption could throw her life into chaos.

She lives in subsidized housing in Arlington, Virginia, with her 6- and 8-year-old sons. She used to drive a truck, but recent health issues have left her unable to work. She relies solely on government subsidies to survive, cobbling together just enough to support her children using social security payments, food stamps and cash assistance payments. If any one of those federal programs were to stall, Cochran could end up on the street.

Cochran said she’s trying to sell some homemade crafts and clothes to secondhand stores to squirrel away a few extra dollars. She returned the toys she’d bought for her sons for Christmas — a Hot Wheelz racetrack for the 8-year-old, a Mighty Beanz game for the younger boy — so she could buy them shoes.

“It was hard, but you have to make choices,” she said. “I’m experiencing quite a bit of anxiety.”