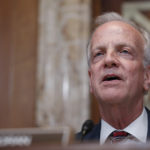 WICHITA — Kansas Sen. Jerry Moran says he wants the government shutdown to come to end, saying it will soon start to affect farmers and aircraft manufacturers.

The Wichita Eagle reports that Moran said Friday after touring three Wichita businesses that he’s “sorry” about what’s happening. He added that people who are dissatisfied with the government sometimes say, “Shut her down, it doesn’t matter.” But Moran says “the things that government does are important to many people.”

He says one effect of a protracted shutdown will be that aircraft manufacturers will be unable to deliver planes because the Federal Aviation Administration office in Oklahoma City that issues aircraft titles is closed. He says farmers hurt by the trade battle with China also will have to wait for federal aid.