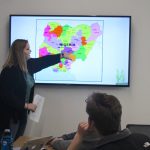 KU student Kara Fort shares her research on the geography of Nigeria to her classmates on Friday, March 22, 2019. The class is researching many aspects of the African nation for the U.S. Intelligence Community.

University of Kansas student Kara Fort finds her most recent research project has a little more at stake than her other, standard assignments, she said Friday before giving a presentation on how climate change is exasperating the agriculture environment in Nigeria.

Her research into one of the African nation’s largest economic industries is not just a project she wants to ace for her college grades. It also will be used by the U.S. Army when it deploys soldiers in Nigeria in the near future.

“It’s exciting but a little nerve wracking because I feel like you are judging your work a little more while you’re doing it,” Fort said. “It’s a testament to the strength of KU faculty for their guidance of students. They’re trusting us to put together materials that will be used in an official capacity.”

Before the U.S. Army Training and Doctrine Command deploys soldiers for a training mission with the Nigerian Armed Forces, the army needs to know what the country’s security environment will be like when their soldiers arrive, said Mike Denning, Director of KU’s Office of Graduate Military Programs.

Through researching many different facets of the African nation, a group of six KU students are getting real-world experience working for the U.S. Intelligence Community and the U.S. Army, and providing them with the information they are going to use on the ground, he said.

“It’s really pretty unique,” Denning said. “I don’t think there are a lot of undergraduate students who can say they are having such an immediate impact in an area around the world.”

KU student Joseph Hartung, who is researching Nigeria’s food, water and energy security for the class, said the project’s purpose gives him a little more motivation to do thorough work.

“It’s nice to be doing an assignment with practical application, rather than just writing because a teacher would like you to for a grade,” he said.

Denning said KU is using a grant it received from the U.S. Intelligence Community to fund the program. He said the government federation awarded the grant to KU in an effort to attract more diversity among those interested in government intelligence careers.

Denning said the university also has a relationship with U.S. Training and Doctrine Command located at Fort Leavenworth, which is a Kansas army base located near the Kansas City metro. The command already has an “e-intern” program that allows college students to gain work experience through researching areas of need for the Army and it is used as a model for the project.

Denning said the command needed research on Nigeria, which lined up well with KU’s African and African-Americn Studies and Geography departments.

“So it worked out perfectly,” Denning said. 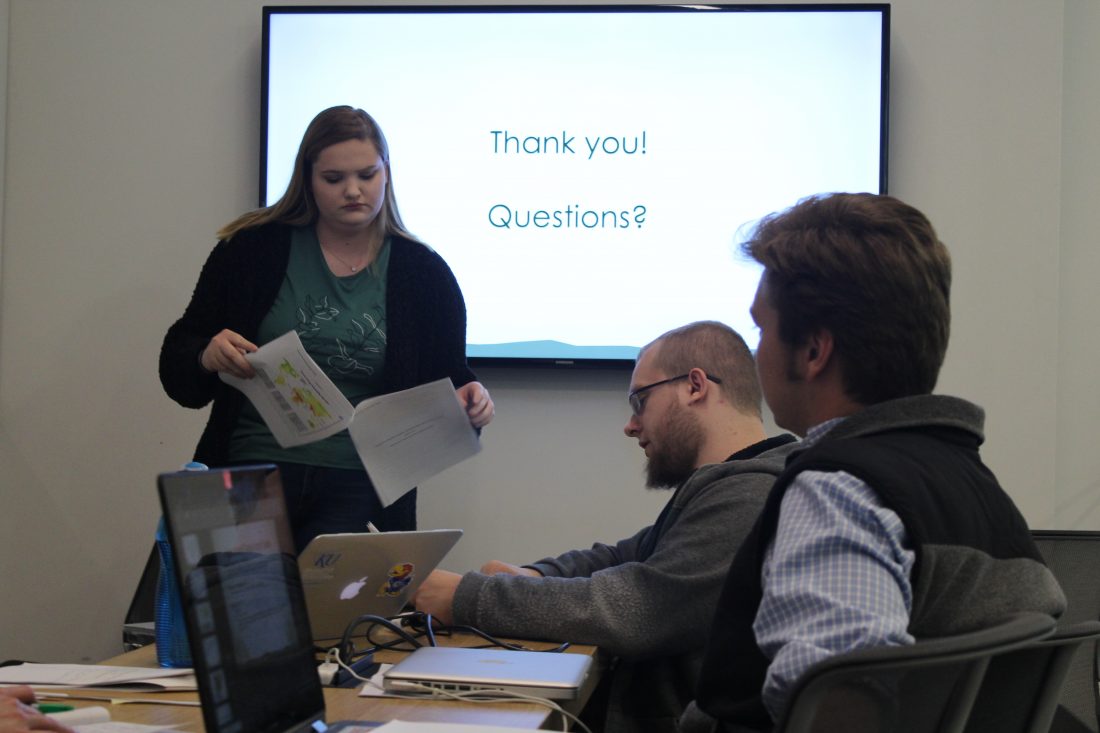 Kara Fort, left, answers questions from Alex Rawson, center, and Joseph Hartung during class on Friday, March 22, 2019. Fort presented her research on Nigeria’s environment for a class project that will provide intelligence for the U.S. Army.

Through the grant, the six students in the program received a scholarship to take the course and the instructor, Abel Chikanda, received a stipend to teach the class.

He said the other research topics students are producing include population and demographics, violent extremist organizations in the country, economic development funding from China, gender and women’s issues and health, diseases and pandemics.

But the class isn’t just work for the Army to use, said Chikanda, who is an assistant professor of African and African-American Studies and Geography. The class research also focuses on information the students would study in other geography courses.

“I thought they were topics that would allow students to develop their expertise in an area they are working on but now specializing in a certain geographic region, in this case Nigeria,” he said. “That way we are able to deliver a product to (the Army), but at the end of the day the students can say they were able to learn how climate change is affecting the people’s lives in Nigeria and so forth.”

The students mostly work on the research in their own time and then meet once a month to present what they have learned.

In their most recent class on Friday, the students gave 10 minute individual presentations on their topics. But at the end of the semester, the students will begin working on a group project that brings together all of the information they researched to present a product to the army.

“We’ll want to see the links between some of the topics these students are studying,” Chikanda said.