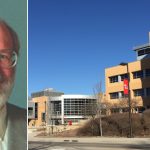 A University of Kansas engineering professor says administrators have suspended him from teaching a course for the rest of the semester after comments he made in class.

Gary Minden, a professor of electrical engineering and computer science, said administrative leaders of KU’s School of Engineering informed him Thursday morning that he is suspended from teaching the course because he told a student to “learn English,” which upset other students and started an “hourlong discussion” on the matter.

Minden said he will not teach the course — EECS 388, a course on embedded systems in engineering — for the rest of the semester.

“A number of students have raised concerns about events that occurred in their engineering class. In response to these concerns, the university has assigned a different instructor to teach the course while the matter is reviewed,” university spokeswoman Erinn Barcomb-Peterson said in email when asked about the incident by the Journal-World.

Minden said the incident occurred at the beginning of a recent class, and he said he made the comment because a student was using a translator on their cellphone.

“Other students, from my perspective, took offense to that,” Minden said. “Not the student I addressed, but other students.”

Minden and the class then had an “hourlong discussion” about what occurred, but students were still upset, he said.

“As the discussion evolved, I started asking simple questions, ‘What would you do? How would you do it?’ Things like that,” he said. “Unfortunately I didn’t manage the class and many students were upset.”

Minden said he didn’t want to comment much more other than what occurred, but he said, in a word, he’s “frustrated.”