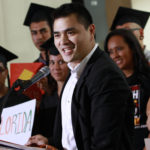 Jose Antonio Vargas, a Pulitzer Prize-winning journalist and Emmy-nominated filmmaker, will give the annual Kenneth A. Spencer Lecture later this month at Lawrence’s Liberty Hall.

As a journalist, Vargas wrote a New York Times Magazine article in 2011 revealing his life in America as an undocumented immigrant. A year later he appeared on the cover of Time magazine with fellow undocumented immigrants as part of a follow-up story he wrote. That was followed by the film “Documented,” which he produced and directed.

The documentary chronicles his journey to America from the Philippines as a child. It explores his public struggle as an immigration reform activist and a voice for the human rights of immigrants. The film also explores his journey inward as he reconnects with his mother.

Vargas is the founder of Define American, a nonprofit media and culture organization that fights injustice and anti-immigrant hate through the power of storytelling. His memoir, “Dear America: Notes of an Undocumented Citizen,” was published by HarperCollins in 2018.

Leading up to the lecture, a free screening of “Documented” will take place at 7 p.m. Tuesday, Jan. 15, at the Lawrence Public Library, 707 Vermont St. A short film made by KU students featuring local immigration stories will also be shown.

The event is sponsored by The Commons at KU, the College of Liberal Arts and Sciences, the KU Office of Research, Lawrence Interfaith Refugee and Immigrant Ministry, Center for Latin American and Caribbean Studies, and the Lawrence Public Library.

The following week, at 7 p.m. Thursday, Jan. 24, Vargas will give the Spencer Lecture at Liberty Hall, 644 Massachusetts St. The event is free, but tickets may be reserved through Liberty Hall.