For Your Ears Only sale vital to Audio-Reader’s future 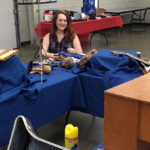 Beth McKenzie, development director at Audio-Reader, prices musical instruments that will be available at the weekend's For Your Ears Only benefit sale on Thursday, Sept. 13, at the Douglas County Fairgrounds.

Janet Campbell said she discovers something she can’t live without while perusing the items every year at Audio-Reader’s benefit sale, For Your Ears Only.

“We have found DVD players, an old turntable, a sound mixer, and last year I bought a keyboard for my grandkids,” said Campbell, the former director of Kansas Public Radio and Audio-Reader.

Those who love music — whether creating or listening — will find bargains, Campbell said.

This year, the sale is more vital than usual for Audio-Reader, which provides audio recordings of daily newspapers, magazines and best-sellers to the visually impaired. In August, the University of Kansas announced it is phasing out direct funding to Audio-Reader over the coming three years, and eventually will stop its $330,000 in annual support for the program.

But Meredith Johanning, Audio-Reader’s assistant development director, advised bargain hunters to show up a little early. Johanning said she expects that the line will begin forming at 3 p.m. Friday afternoon, and that by the time the doors open at 6 p.m., people will be lined up around the building.

Beth McKenzie, development director at Audio-Reader, prices musical instruments that will be available at the weekend’s For Your Ears Only benefit sale on Thursday, Sept. 13, at the Douglas County Fairgrounds.

That’s the length some will go to just to check out the thousands of vinyl records and CDs, along with vintage audio equipment, that will be sold below market prices, Johanning said.

On Thursday, volunteers were finishing up slipping plastic sleeves over records — 7,000, to be exact, including everything from classical music to tunes from modern artists like the New Riders of the Purple Sage and Duane Allman.

The weekend sale generally nets $30,000, which goes directly into helping Audio-Reader listeners stay connected with their communities and live as independently as possible, Johanning said.

“We are hoping to raise that amount again, if not more,” Johanning said.

Tickets are required to enter the sale on Friday, and cost $10 in advance or $15 at the door. Admission is free Saturday, with the prices of many items significantly reduced at noon.

Along with the vinyl albums, the tables will be filled with 11,000 CDs and DVDs and more than 400 pieces of audio equipment, including more than 40 turntables. There will also be several instruments for sale, including guitars, saxophones, keyboards and even a South American charango, a stringed instrument that is shaped like a lute.

For more information about the sale, go to reader.ku.edu.

• Aug. 17 — KU to cut funding to Audio-Reader program; all university funds to be eliminated by 2022