Specimen belonged to a brachiosaur 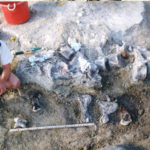 photo by: Photo courtesy of the KUVP archives

This photo from the excavations in 1998 shows brachiosaur foot bones below a tail of a Camarasaurus. A University of Kansas expedition crew member poses next to the bones for scale.

The creature otherwise known as Sasquatch remains at large, but Burnham’s “Bigfoot” — actually a very large dinosaur foot skeleton — has finally been properly identified. Twenty years ago, the bones were discovered in the Black Hills of Wyoming, and a new article in the journal Peer J has confirmed that the foot came from a brachiosaur.

“There are other dinosaurs that may have been bigger or longer or the same size, but the feet weren’t preserved,” says Burnham, a preparator for the vertebrate paleontology lab at the University of Kansas Biodiversity Institute.

Burnham wasn’t present at KU’s excavation site back when paleontologists unearthed the 150 million-year-old fossil in 1998. But he does remember his very first day on the job as a state paleontologist at KU, when he helped unload the truck full of Black Hills dinosaur bones to transport into the Biodiversity Institute’s labs.

Bigfoot, he says, was one of many specimens. But the foot, measuring nearly a meter wide, was special. Still, because of the sheer number of fossils found at the Black Hills site, the extensive research involved and life’s tendency to throw curveballs, paleontologists weren’t able to identify the foot until much, much later. 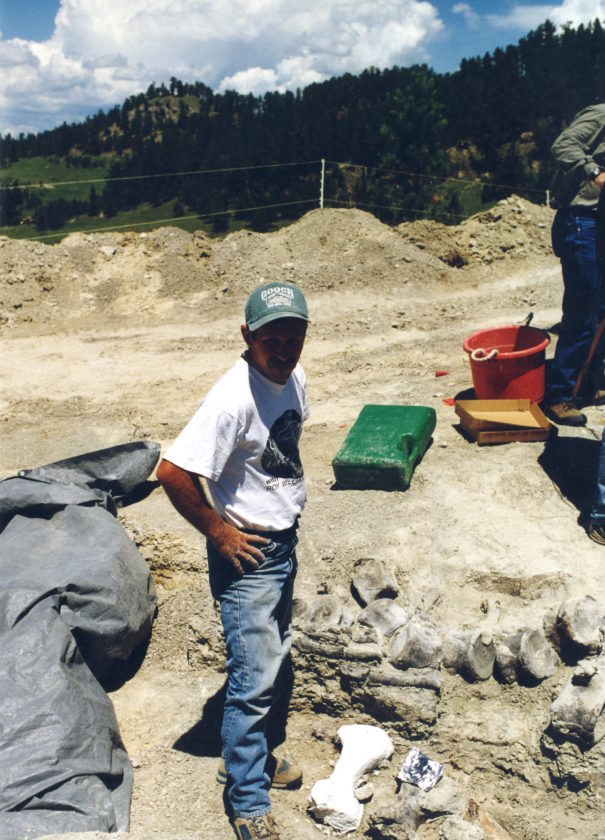 In this 1998 photo, former KU Natural History Museum exhibits staff member Errol Hooper poses next to several of the dinosaur foot bones later identified as belonging to a brachiosaur. KU Paleontologist David Burnham recently co-authored an article in the journal Peer K about the specimen, nicknamed “Bigfoot” and hailed as the largest dinosaur foot ever recorded.

Burnham and his co-authors on the Peer J article — Anthony Maltese, Emanuel Tschopp and Femke Holwerda — used 3D scanning and compared their specimen with detailed measurements from several other dinosaur species, finally confirming Bigfoot as a brachiosaur.

The sauropod dinosaurs, which scientists estimate ranged in size from 90 to 100 feet long, were among the largest land animals on Earth at one point. They famously hail from the Jurassic Period — you might remember the brachiosaur making a cameo in one of the rare tranquil moments in “Jurassic Park,” for example.

“It’s the one that reaches his head up in the trees and sneezed on the little girl,” Burnham says of the long-necked species.

The Brachiosaurus had forelegs that were longer than its hind legs, hence the Latin name meaning “arm lizard.”

Bigfoot lives in the permanent collection at the KU Biodiversity Institute, which is housed in Dyche Hall with the KU Natural History Museum. It’s not on display currently, but visitors can check out the specimen during behind-the-scenes tours of the labs, Burnham says. There’s also a Bigfoot cast on exhibit at Union Station in Kansas City, Mo. 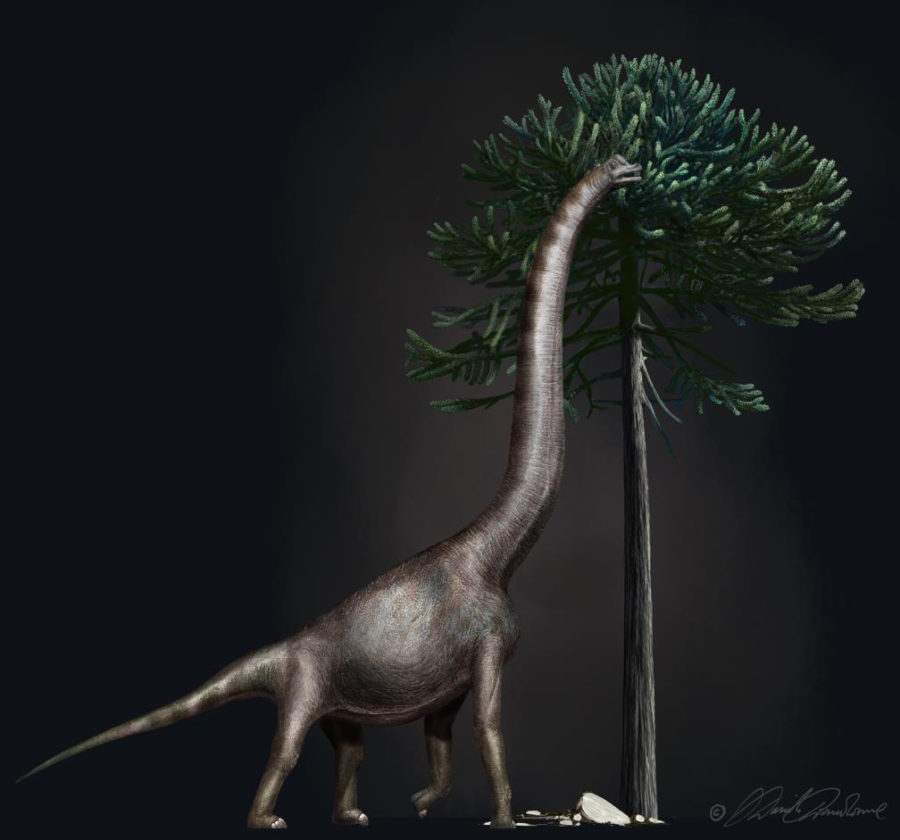 This rendering shows a Brachiosaurus nibbling from an Araucaria tree. The animal to which “Bigfoot” belongs was nearly 4 meters high at its hip.

“I do want to push for it to go on exhibit here (at KU),” Burnham says.

In the meantime, Burnham and his colleagues have a few unanswered questions to explore next, namely with the other several specimens found at the Black Hills dig site. These include a brachiosaur hand and skull.

“The big question is, after we look at everything in the quarry, can we connect the foot to the big hand? Can we connect that to the skull? Are they too far apart? Are they from the same individual?” Burnham says. “Is there going to be a big skeleton in that hill?”

Aside from Bigfoot, other dinosaur feet noted for their size include another brachiosaur specimen with a KU connection.

In the summer of 1900, after earning his bachelor’s and master’s degrees at KU and a stint at the KU Natural History Museum, Elmer Riggs led an expedition to Colorado and Wyoming on behalf of Chicago’s Field Museum. There, on July 4, 1900, his assistant, H. William Menke, discovered the first known skeleton of the giant Brachiosaurus.

Riggs named the dinosaur, declaring it the largest species ever known, and brought it back to the Field Museum for public display.

“It’s kind of full circle for KU, in a way,” Burnham says.

Bigfoot may be the largest dinosaur foot ever recorded, but there’s no telling how large the entire animal would have been.

“We only get the bones. We don’t get the cartilage that goes between the bones, so any length estimate is just that — an approximation,” Burnham says. “… It’s really impossible for us to say, by the measurement of a single foot, how long that dinosaur was.”