KU’s interim provost staying in role until sometime next year

Chancellor cites his 'leadership and expertise' 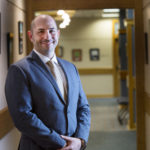 In this file photo from June 2016, Carl Lejuez is pictured in his role as dean of the University of Kansas College of Liberal Arts and Sciences.

The interim provost at the University of Kansas will be staying on in that position until sometime next year, KU Chancellor Douglas Girod announced this week.

When Provost Neeli Bendapudi, the second in command at KU, was hired in April to be the new president of the University of Louisville, KU’s dean of liberal arts and sciences, Carl Lejuez, was named as interim provost and executive vice chancellor.

The university said it would begin a search for a new permanent provost, but that search never got underway. In the meantime, Lejuez was tasked with trimming $20 million from the Lawrence campus budget for fiscal year 2019. The cuts amount to a roughly 6 percent reduction across all Lawrence departments.

In a news release in May, KU attributed the need for budget reductions to “the many long-term commitments and investments that each year have exceeded revenue,” combined with institutional budgeting practices “inconsistent with the current challenges of higher education funding,” along with a decadelong downtrend in state funding.

On Thursday, Girod said that Lejuez had been doing such a good job in the provost role — showing “administrative and leadership skills” — that he decided to keep him on until sometime in 2019.

“Carl has done terrific work amid challenging circumstances, which includes identifying budget concerns and leading our strategy to align spending with priorities to support core activities,” Girod said in a statement.

“In light of Carl’s leadership and expertise – and because there is value in stability during such a complicated budget process – I have asked him to continue his interim appointment into 2019,” Girod added.

An executive search firm will be engaged to launch a nationwide search for a provost in late spring 2019, Girod said.

On Monday, the university is scheduled to have another town hall forum on the $20 million in budget cuts from 3:30 to 5 p.m. at Spahr Engineering Classroom in Eaton Hall.