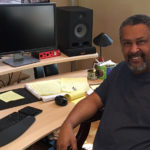 It doesn’t matter where Kevin Willmott watches “BlacKkKlansman.” Whether it’s at the Cannes Film Festival, Hollywood, New York or Lawrence, in every theater, the ending is always met with dead silence.

The award-winning film with the arresting finish — relax, no spoilers below — opened in area theaters just this past weekend; however, Willmott, a University of Kansas professor of film and media studies, has seen it six times since March. That’s because he co-authored the script with Spike Lee.

Rave reviews are all Willmott has been hearing. According to Rotten Tomatoes, the film received a 97 percent positive rating and grossed $10.9 million over the weekend.

Set in the mid-1970s, the film is based on the memoir of Ron Stallworth, a black police officer in Colorado Springs who infiltrated the Ku Klux Klan.

“Spike didn’t want the script to be a period piece,” Willmott said. “We looked into as many connections to today as possible.”

The film includes references to the current political climate, including last year’s violent protest in Charlottesville, Va., and President Donald Trump’s response to that event.

Willmott’s involvement with the project began about two years ago. The film’s producer, Jordan Peele, was developing the project but was unhappy with the initial script. He turned to Lee for help, who then turned to Willmott to collaborate with him. Together they worked at capturing the absurdity of the situation.

“It’s funny and crazy that a black guy infiltrates the Klan,” Willmott said. But they didn’t tell the story through jokes; they did it by telling the truth.

“The closer you get to the ugliest of everything and evil and hate of it all and expose it, that exposes the absurdity of it,” Willmott said.

This is the latest of many successes for Willmott, who wrote and produced “C.S.A.: The Confederate States of America” in 2004. Lee was the presenter of that film, and the two worked together on other projects, including 2015’s “Chi-Raq,” an Amazon original musical. They now have several other projects in the works.

“BlacKkKlansman” will be shown for free as part of the Free State Festival at 8 p.m. Sept. 19 at Liberty Hall. Although there’s no charge, a ticket is still required.

“William Allen White: What’s the Matter with Kansas” will be shown as part of the festival at 2:30 p.m. Sept. 22 at Liberty Hall. Tickets will cost $8.

For the latest project they read Stallworth’s book, “Black Klansman,” as well as former Grand Wizard of the Klan David Duke’s book and the speeches of Kwama Ture/Stokely Carmichael.

“We bathed ourselves in everything of the period and pulled from a bunch of different sources and found gems in all these things. But it was Ron’s book that was the real core to the film,” Willmott said.

Then he had to turn it into a movie, which added more drama, such as a scene in which the wife of one of the Klansmen is sent on a mission carrying a bomb in her purse.

Classes begin at KU in just a few days, and Willmott will have a lot of experiences to share with his students from a whirlwind summer.

Back in May he was at the Cannes Film Festival, where “BlacKkKlansman” received a 10-minute standing ovation and was awarded the second-place Grand Prix award.

“That was mind-blowing,” Willmott said. “It was a hugely emotional moment, an out-of-body kind of thing.”

Then in the past two weeks he has been at movie premieres on both coasts. Saturday evening he was at Lawrence’s Regal Southwind Stadium 12. Moviegoers recognized him and clapped.

“That allows me to be in the industry and share those stories with my students,” he said. “I try to educate them on how the industry really works and the problems to avoid. I put them through the paces I put myself through.

“I tell my students they should write what they know, but also what they believe in. I try to do a little of both.”

He’s very proud of his students, some of whom have gone on to become filmmakers and win their own prestigious awards.

“It’s pretty cool,” said Willmott, who has been on the faculty since 2000.

Along with his international acclaim for his work, he drew national attention last fall when he began wearing a bulletproof vest in class. It was his way of protesting the state law that allows concealed carry on campus.

He plans to wear the vest again this year and as long as he is teaching on campus.

As Willmott talks, sitting in his East Lawrence home, it’s apparent that growing up in Junction City influenced his work.

“In many ways it was a great place to grow up because you understood that race matters, but also race doesn’t matter.

“It matters because you are a human being, and clearly Junction City was a great example of that with all the beautiful diversity. But it also mattered because you had to know who you were, and people would try to take that away from you.”

While president of the student body at Marymount College in Salina, he received a letter from David Duke, who was trying, as the head of the National Association for the Advancement of White People, to promote his racist agenda on college campuses. Willmott never responded.

Willmott wrote his first play, “9th Street,” while at Marymount. It’s about the red-light district of his hometown. The play won him acceptance into the Master of Fine Arts program at New York University.

Though he didn’t meet Lee at the time, he observed how Lee was having success as a fledgling filmmaker by tapping resources in his native Brooklyn.

Willmott decided to return home, because people knew his story in Kansas.

“People didn’t know my story in New York,” he said.

While working on “BlacKkKlansman,” Willmott also completed a documentary on a related topic.

“William Allen White: What’s the Matter with Kansas,” commissioned by the William Allen White Foundation, is about some of the big moments in the life of the famous newsman from Emporia. Matt Jacobson, a KU professor in the department of film and media, was the film’s cinematographer.

White’s “big, dramatic thing was running the Klan out of Kansas,” Willmott said. “He was also involved with defeating Dr. John Brinkley.”

Brinkley, a demagogue and medical fraud known as the “goat-gland doctor,” was running for governor in 1930 in a write-in campaign. His nickname came from his practice of transplanting goat testicles into men — a procedure that he falsely claimed would restore a man’s sexual virility.

“Brinkley is a warning to today,” Willmott said. “People need to be wary of charismatic demagogues who lie and manipulate and talk about things too good to be true to sell the general public.

“White was warning us about that, and we are living this right now.”

Jacobson has been Willmott’s cinematographer since 1999.

“I’m a big fan of Kevin’s work,” Jacobson said. “Kevin manages to come up with the funniest stuff, but he doesn’t do stuff funny; he does humor with a purpose.

“‘William Allen White’ gave us a chance to try a few different things.”

As the semester begins, Willmott will continue teaching his students that when it comes to humor it’s about rooting it in facts that advance and enliven the story.

“Not being funny but real — and telling the truth,” Willmott said, “and the closer you get to the truth, the humor comes.”