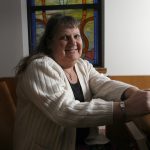 In this Nov. 24, 2010, file photo, Stephanie Mott poses for a picture at the Metropolitan Community Church in Topeka, Kan. (Ann Williamson/The Topeka Capital-Journal via AP)

Friends and family are mourning well-known transgender activist Stephanie Mott, 61, who died suddenly of a heart attack Monday in Topeka.

“No one will ever replace Stephanie Mott,” said Tom Witt, executive director of Equality Kansas. Mott had served as the board chair for two years and was currently still active as the vice chair of the organization.

Kansas Gov. Laura Kelly posted on Facebook Monday that “Mott was a champion for equality and a role model for the LGBTQ+ community. She will be missed, but her advocacy to improve Kansas will be remembered.”

Mott was admitted to a Topeka hospital Sunday and died the next day, according to her friend the Rev. Sarah Oglesby-Dunegan of the Unitarian Universalist Fellowship of Topeka.

Jennifer Hamer, the University of Kansas vice provost for diversity and equity, issued a statement Monday night on Twitter calling Mott a local pioneer who placed the fight of transgender rights before her own personal struggles.

“We are better today because she graced our presence and gave us a different future,” Hamer said.

Mott grew up in Eudora in the 1960s. She previously told the Journal-World that her early life wasn’t easy. She was raised Christian, and said she spent much of her adult life struggling to reconcile her religion with her existence as a transgender person.

“I will remember most her tireless advocacy,” said Oglesby-Dunegan. “The baton is now passed to us who do advocacy for LGBTQ issues.”

While Mott was officially a member of her congregation, Oglesby-Dunegan said she worked with many communities, including other churches.

“What made her special was how she very bravely told her story of being a transgender person who knew at a very young age she identified as a girl,” Oglesby- Dunegan said. “She grew up in rural Kansas, and that would have been 50 years ago.”

Mott developed the “Transgender Faith Tour” and traveled around the country, going wherever she was invited, telling people what it meant to be transgender and Christian.

She began the tour in 2015, and for several years she traveled and blogged about the experience.

“She educated folks in the helping profession of what it means to be transgender and what they could do to be more welcoming in the community,” Oglesby-Dunegan said.

Mott lived in Topeka at the time of her death. Her work led to the City of Lawrence adding gender identity to its anti-discrimination policy, according to her biography with the University of Kansas Emily Taylor Center for Women & Gender Equity, where she was a Pioneer Woman in 2013. Pioneer Women are “exemplary Kansas women who have made historic contributions of local or statewide significance,” according to the center’s website.

Mott struggled to conform with expected gender identity and dealt with alcohol and drug abuse along the way, which led to homelessness when she was 48, according to her biography at emilytaylorcenter.ku.edu.

Following her transition to the person she felt she was meant to be, she went back to college and began advocating for the transgender community in Kansas.

Among her many accomplishments, she was the founder and executive director of the Kansas Statewide Transgender Education Project, which worked to eliminate discrimination against transgender people and their families through education.

Plans for a memorial service had not been announced as of noon Tuesday, according to Oglesby-Dunegan.