‘Night of 1,000 Fridas’ event to celebrate famous Mexican artist, encourages everyone to participate 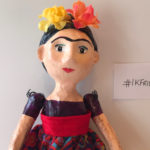 Lawrence artist Karen Roberts has completed a Frida doll to display on "Night of 1,000 Fridas." Anyone can participate in the event by creating a depiction of artist Frida Kahlo and sharing it with #1KFridas on Friday, Jan. 25, 2019.

A Lawrence art studio will become a hub for an upcoming global effort to create 1,000 depictions of internationally acclaimed Mexican artist Frida Kahlo, who is known for her intense self-portraits.

“Night of 1,000 Fridas” was created by Theodore Carter, a Washington, D.C., author and street artist, with the goal of building community and bringing free and accessible art to the public.

Here in Lawrence, local artist and nurse practitioner Karen Roberts, a fan of Kahlo — who died in 1954 — saw information about the event posted by Carter on Facebook, and she decided to take part.

At first, Roberts was planning to participate by simply sharing some of her own Kahlo-inspired creations, but as she discussed the event with other artists, they decided to do a group exhibit.

Roberts’ artist friend Diana Dunkley offered to host the exhibit from 5 to 8 p.m. on Jan. 25 at Dunkley’s Studio 3D at 1019 Delaware St.

The “Night of 1,000 Fridas” date, Jan. 25, coincides with Lawrence’s Final Friday, an event on the last Friday of every month in which downtown Lawrence and the Warehouse Arts District host performances and exhibits.

In addition to the local exhibit, members of the public can participate by creating depictions of Kahlo, then photographing them and sharing them on social media with #1KFridas on Jan. 25, Roberts said.

“Interest has grown and grown,” Roberts said of the exhibit. “Over 20 artists have committed to bringing pieces.”

The exhibit will include Dunkley and Margaret Rose presenting an interactive conceptual piece called “Frida Was a Drama Queen.”

Kahlo’s passion and vibrant colors are what Roberts finds inspiring.

Considered one of Mexico’s greatest artists, Kahlo, born in 1907, nearly died as a teenager in a bus accident. Recovering in a body cast, she began to paint with an easel that she could use in bed.

Throughout her life, her physical and emotional pain — as well as her turbulent marriage to Mexican muralist Diego Rivera — was depicted in her work.

Since her death at age 47, she has become an icon of female creativity and is celebrated for her attention to Mexican and indigenous culture.

Before Roberts heard of “Night of 1,000 Fridas,” she said, she was in something of an artistic rut. She had been working on a Frida doll. It was almost finished, and this event inspired her to complete it for Jan. 25. 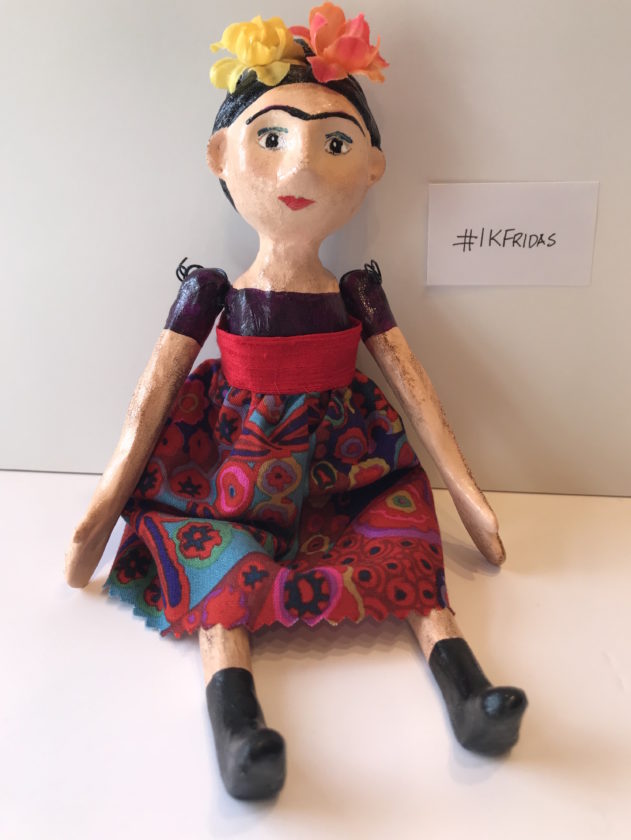 Lawrence artist Karen Roberts has completed a Frida doll to display on “Night of 1,000 Fridas.” Anyone can participate in the event by creating a depiction of artist Frida Kahlo and sharing it with #1KFridas on Friday, Jan. 25, 2019.

Roberts plans to have other items on display at the exhibit, including a decorated cake depicting Kahlo’s famous face.

So much local interest in “Night of 1,000 Fridas” has arisen that Carter, the event’s founder, named Lawrence as one of the event “hubs,” along with locations from Florida to Washington, D.C.

Some of the participants in social media’s #1KFridas, according to Carter’s website, will include a 21-member female street art team from Brazil, former NFL quarterback Todd Marinovich and the Mexican Cultural Institute of Washington, D.C., which plans to hang a large banner in front of its building to celebrate the event. For more information, go to theodorecarter.com.